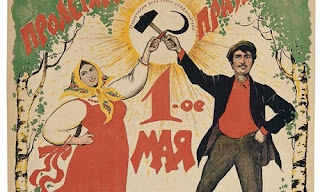 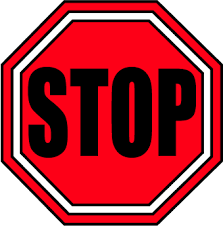 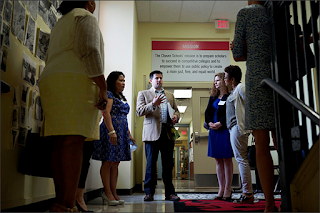 Jason Kling, center, a counselor and social worker at Chavez Prep Middle School in the District of Columbia, talks with prospective charter school board members about his role during a recent tour of the school. The tour was part of a training course to help prepare people for service on charter school boards.
—T.J. Kirkpatrick for Education Week

Last month, a group of sitting and soon-to-be seated charter school board members—lawyers, government workers, and researchers among them—descended on Chavez Prep Middle School, a charter in the nation's capital, as part of a training workshop designed specifically for members of charter boards.

"I don’t think there are enough good charter school boards because there hasn't been enough emphasis from leaders and authorizers on having strong boards," said Carrie Irvin, the president and co-founder of  Charter Board Partners, a national nonprofit organization that provides training to charter boards and the sponsor of the recent workshop in Washington. (Charter Board Partners is supported by the Bill and Melinda Gates Foundation and the Walton Family Foundation. Education Week receives support from Gates for coverage of the implementation of college and career-ready standards and from Walton for coverage of parent empowerment issues.)

Taking participants to a local charter school helps drive home the point that a board serves students before all else, Ms. Irvin said.

Having nonprofit boards run individual or small groups of schools instead of a single, elected board running an entire district, is one of the biggest innovations of the charter school movement, some advocates say.

"Charter or no, every school is unique, so there is tremendous benefit to making decisions as close as possible to the kids," Ms. Irvin said. "Boards are able to make much nimbler decisions in response to the particular needs of students and families of that school."

Although that may be the case, such a setup can limit broader community input because charter board members aren't elected by voters.

"District school boards, however imperfect, allow for that," said Christopher Lubienski, a professor of education at the University of Illinois in Urbana-Champaign. "Obviously the number of people who vote for them is pretty low, but they were designed to reflect the needs and preferences of the wider community."

This form of school governance also can bring a unique set of problems, caused by an evolving and often unclear chain of accountability among authorizer, board, and management company, said Luis A. Huerta, an associate professor of education and public policy at Columbia University’s Teachers College.

"The majority [of states] have no regulation that outlines the operations or makeup of charter school governing boards," Mr. Huerta said. "Ultimately, I'm not convinced that board professionalism would necessarily mitigate [those issues]."

One of the organizations backing the tighter state oversight of Ohio's charter sector is the Thomas B. Fordham Institute, a Washington-based think tank. Its Ohio branch also authorizes charter schools in the state.

"Almost always when you see these meltdowns, the board does not understand some very basic things," said Kathryn Mullen Upton, who is in charge of authorizing at Fordham in Ohio. "Often, they relate to areas of professional expertise—being able to read a financial statement and understanding the state’s accountability system."

She said it's important to have a diverse group of professions and backgrounds represented by members on a board because the panels have all the duties and obligations of a school district. They need lawyers, real estate agents, and human resources professionals to compliment the educational expertise of the school leader, she said.

For that reason, Charter Board Partners—which joined the Fordham Institute for a separate board training in Ohio— also acts as a matchmaker, recruiting prospective board members and connecting them with schools.

There is nothing new under the sun.

In fact, charter schools originated with the left, but now, as part of everything else going on related to creation of the  "perfect worker", aka The New Soviet Man, charters are being heralded and supported mainly by the Republican neoconservative right.

The brainwashing of school board members to do the bidding of the corporate/government combine started in 1981.  While serving as Sr. Policy Advisor, Office of Educational Research and Improvement, U.S. Dept. of Education, during the first Reagan Administration, I attended a staff meeting during which an extraordinary proposal for funding by my office of local education agencies was discussed.  The proposal called for taxpayer funding for the "training of locally-elected school board members in Effective School Research practices" (Skinnerian OBE necessary for workforce training).  The Asst. Secretary for my office, a conservative Republican formerly associated with the Congressional Republican Study Committee, was very upset with me when I objected to such use of taxpayers' money.  The Director of the Office of Libraries and Learning Technology (OLLT) and the Director of the National Center for Educational Statistics (NCES), both longtime career educators, came up to me after and said "You are absolutely correct.  The Department has funded many questionable programs in the past, but this one is unconscionable."  (For documentation on Effective Schools, go to www.deliberatedumbingdown.com where the deliberate dumbing down of america is a FREE download. Scroll down for Index of entries related to Effective Schools.)

As a former elected school board member, I was aghast at such a proposal to brainwash locally-elected board members in Effective School Research (Skinnerian dog training methodology and change agent tactics to get the community on board with the corporate and U.S. Dept. of Education's lifelong school to work agenda).

In regard to adjective "lifelong", yes, folks, "lifelong":  The National Alliance of Business in the mid-nineties, on its letterhead, called for "Kindergarten to Age 80 Workforce Training"!

“Principal’s Expectations as a Motivating Factor in Effective Schools,” 225

“The Goal of Hong Kong Schools—Establishing Quality in
Its Schools,” 380–381


Posted by Charlotte Iserbyt at 5:39 AM