A 3D Research Report by A. Patrick Huff, Ph.D.


Of the many outcries from the populace concerning public schools falling under a one size fits all testing program, one complaint has stood out as possibly the most Orwellian of them all. This is the fear that various outside organizations, along with the government, are data mining personal information about the children who are taking the new Common Core assessments. The latest claim now comes from within a school district in New Jersey that has cried foul over the discovery of spying on a student’s social media site. The company responsible for the intrusion into the student’s conversations is Pearson, the testing conglomerate based in London.

Initial reporting on this incident came from Mr. Bob Braun on his website bobbraunsledger.com on March 13, 2015. Mr. Braun’s report was then picked up by the education reporter for the Washington Post, Valerie Strauss, who wrote an article exposing the spying perpetrated by Pearson. While many may have doubted the claims of spying and data mining personal information of students through the testing process, it appears the public’s fear of intrusive and unconstitutional invasions of privacy have been vindicated with this latest incident.

Partnership for the Assessment of Readiness for College and Careers (PARCC), one of two companies selected to receive federal funds to create the Common Core assessments, is currently testing students across the country as the spring semester of Common Core testing gets into full swing. The alleged breach of security happened in a school district in New Jersey where it was first reported by the New Jersey Department of Education (NJDOE) to the school district, that one of their students violated security protocols by tweeting information about the test. Pearson obtained the information off of a social media site visited by the student in question, and reported it to the NJDOE. It was reported that Pearson was in touch with school district officials about the incident and that state education authorities were discussing with local school officials consequences for the student’s actions in saying “something inappropriate about the tests”.  It was reported at first that the student took a picture of a test question and tweeted it. As it turns out, the student tweeted an opinion of one of the items on the test with no picture attached. Also noted was that the tweet occurred after school hours.

The state education department is cooperating with this spying and has asked at least one school district to discipline students who may have said something inappropriate about the tests. This website discovered the unauthorized and hidden spying thanks to educators who informed it of the practice–a practice happening throughout the state and apparently throughout the country (Braun, 2015).

This ought to send a cold chill down the spine of every parent who has school age children. The thought of one of your children being subjected to a private company monitoring exchanges between students on social media is absurd. It also should rally all patriots who believe we still answer to the U.S. Constitution as the law of the land. The incident in question did not take place on campus and it did not present a breach of test security. The student was merely voicing an opinion in a tweet about a test question. So are students voicing opinions outside of school to other friends now not allowed?  Does a foreign company, or any company for that matter, have the right to look at private conversations of an unsuspecting individual? Pearson admits to monitoring all social media during test taking time. Is that even possible? It appears that we have indeed slid a long way down the proverbial slope with the revelation of this incident.
It is to the credit of the school district superintendent, who was alerted to the infringement and reported it to her colleagues.

News of the monitoring of social media was revealed in a message that Superintendent Elizabeth C. Jewett of Watchung Hills Regional High School District in New Jersey sent to colleagues about a disturbing episode that she was made aware of by her district’s testing coordinator. It was posted on the Website of Bob Braun, a former reporter, education editor and senior columnist at the   Star-Ledger, who called the monitoring of social media nothing less than “spying” (Strauss, 2015).

Elizabeth Jewett, the superintendent of Watchung Hills Regional High School district in Warren, New Jersey, commented that she would not be surprised if this incident added to the growing number of parents who decide to opt-out their children participating in the testing program. The opt-out decision is a growing trend with parents as more concerns are revealed about the Common Core Standards that states are now obligated to follow.
Please take time to read the articles listed as references for this article and then get familiar with the terrible situation that all public schools are involved with in our country. Of course, states and school districts should not be dictated to by the federal government. The federal government should not be involved with state standards for education. Traditionally this has been the state’s jurisdiction, and an independent school district has traditionally decided which curriculum to use for its students. Those of you who read Charlotte Iserbyt’s blog are more familiar with what has happened to our public schools than the general public. You know that the incremental erosion of states rights and individual rights has been transpiring for many decades now, but especially since the intrusion of the federal government through the No Child Left Behind Act (NCLB) of 2002. The general public, though, is less familiar with how this has happened and has fallen victim to the hue and cry of public school choice. There is much confusion among parents looking for answers as to what has happened to the education system.

Now we see a company from a foreign country involved with spying on students posting on social media sites. What has it become? The idea of opting out of taking the test by parents and their children may just be the most immediate way to resist this horrible state we find ourselves in with our public school system. There is strength in numbers and a school district would be hard pressed to pass judgment on thousands of students who decide it is their patriotic duty to opt out of taking the next round of tests. If this is a trend for the future, superintendents should embrace this action and not seek ways to punish the students exercising, what they feel, are their rights as an American and a free individual. The students may just be paving the way for the education profession to escape the slavery they now operate under.
AUTHOR'S NOTE: In August of 2012 it was my privilege to be a part of Charlotte Iserbyt’s education conference that produced Exposing TheGlobal Road to Ruin Through Education. I served the parents and students of Texas as an educator for 34 years. I retired from the profession in 2007 and as a principal saw the devastation on the school system from the domination of the testing regime. In my search for answers I discovered Charlotte and have been on the path of enlightenment ever since. For the past four years I have been involved with researching No Child Left Behind, along with the students, parents and education professionals that have fallen victim to its mandates. This has resulted in a new book that I finished in January and is now available HERE. The Takeover of Public Education in America: The Agenda to Control Information and Knowledge through the Accountability System is a look into the matrix of control that has its grip on public schools. School officials feel powerless to challenge the system since the mandates are written into law. State laws governing education control the actions of public school officials. The problem is that now those laws, which were intended to work for the good of students, have now become of a bureaucratic nightmare for education professionals and parents of children across the country, as the federal government has moved in to take control. It is my sincere hope that the information contained within my book will help many who have questions connect some dots and hopefully provide a pathway for change. 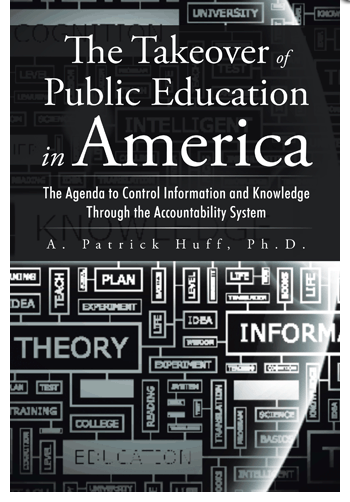 The website to preview the book is located at http://www.aphuff.com. If you decide to order the book, let me express my gratitude, and I hope you find it useful for your situation.

#FIRE THE BOSS
Posted by Charlotte Iserbyt at 12:31 PM