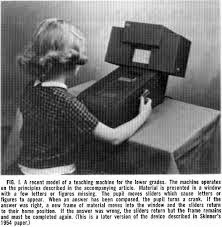 In 1963 THE ROLE OF THE COMPUTER IN FUTURE INSTRUCTIONAL SYSTEMS was published as the March/ April, 1963 supplement of Audiovisual Communication Review.[1] James D. Finn of Los Angeles was the principal investigator and Donald P. Ely (later of Project BEST: Basic Educational Skills through Technology) was the consulting investigator for this project. Excerpts from a chapter entitled “Effortless Learning, Attitude Changing, and Training in Decision-Making” follow:


Another area of potential development in computer applications is the attitude changing machine. Dr. Bertram Raven in the Psychology Department at the University of California at Los Angeles is in the process of building a computer-based device for changing attitudes. This device will work on the principle that students’ attitudes can be changed effectively by using the Socratic method of asking an appropriate series of leading questions designed to right the balance between appropriate attitudes, and those deemed less acceptable. For instance, after first determining a student’s constellation of attitudes through appropriate testing procedures, the machine would calculate which attitudes are “out of phase” and which of these are amenable to change. If the student were opposed to foreign trade, say, and a favorable disposition were sought for, the machine would select an appropriate series of statements and questions organized to right the imbalance in the student’s attitudes. The machine, for instance, would have detected that the student liked President Kennedy and was against the spread of Communism; therefore, the student would be shown that JFK favored foreign trade and that foreign trade to underdeveloped countries helped to arrest the Communist infiltration of these governments. If the student’s attitudes toward Kennedy and against Communism were sufficiently strong, Dr. Raven would hypothesize that a positive change in attitude toward foreign trade would be effectively brought about by showing the student the inconsistency of his views. There is considerable evidence that such techniques do effectively change attitudes.

Admittedly, training in decision-making skills is a legitimate goal of education in this age of automation, but the problem remains—does the educator know what values to attach to the different outcomes of these decisions?... What about students whose values are out of line with the acceptable values of democratic society? Should they be taught to conform to someone else’s accepted judgment of proper values? Training in decision-making is ultimately compounded with training in value judgment and, as such, becomes a controversial subject that needs to be resolved by educators before the tools can be put to use.

And you thought Johnny was just learning math? Think again....

Endnote:
1. Excerpted and adapted and emphasized from my book, the deliberate dumbing down of america, p. 67-68. Facts concerning this publication:
(Monograph 2 of the Technological Development Project of the National Education Association [Contract #SAE9073], U.S. Office of Education, Dept. of Health, Education and Welfare: Washington, D.C., 1963)
Posted by Charlotte Iserbyt at 5:57 AM