WHAT A DIFFERENCE 37 YEARS MAKES!

In 2014 you can read an article by Gary Stearn, "Common Core: School board members question advocacy group," Oct. 27, 2014, showing how far we've come from local control:


The New York State School Boards Association has long served as the voice of hundreds of diverse [local] boards of education on an ever-changing slate of issues.

But now critics in the Lower Hudson Valley are calling out the School Boards Association for embracing the Common Core, the new teacher-evaluation system and other state-mandated reforms.

Some say the group has become too cozy with the state Education Department at a time when many [local] school board members and educators in Westchester, Rockland and Putnam counties are resistant to the state's agenda.

"They don't seem to be representing us or our [local] region," Pleasantville Board of Education President Shane McGaffey said. "It feels like they've become a mouthpiece for the state as opposed to their [local] members."

The Pleasantville school board took the unusual action this month of halting its dues payments to NYSSBA. Board members from other [local] districts are watching to see how the School Boards Association responds....

Kremer said that the state's school reforms are written into state law, and that NYSSBA's role is to help [local] school boards implement policies effectively.

"Whatever one thinks of the Common Core, as we sit here today, it is the law in New York state," he said. "Our job is to make sure that [local] school boards we represent have the information they need to make smart local decisions." [bold added] 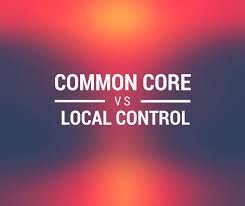 I took the liberty of inserting the word "local" into the excerpt above so you can catch the significance of what is really being said. No more local control. No more local representation. The state is issuing top-down mandates.

Read the warnings from George W. Smith circa 1977:

On March 27, George W. Smith, immediate past president of the National School Boards Association, warned school board members attending the NSBA convention in Houston that “The Congress and the federal bureaucracy could become the country’s master school board unless school board members stand up and be counted.” He urged delegates to continue to forge a strong NSBA to convince Congress that local school board members are truly representative, most unselfish, and the best qualified persons to represent the local viewpoint in education.

Smith said local constituencies cannot be forgotten even while the new trust is being built with Congress. “We must not forget our own constituency,” he noted. He also advised board members to be aware of—and leery of—proposals for public involvement in public school operations that would shift decision-making authority to “vaguely defined groups of citizens at the school site level.” The minister from San Diego cautioned that the power to make a decision must never be divorced from the responsibility for making that decision....

He said school boards must be strong for another reason—to counter the movements of the courts and federal regulatory agencies into the operation of schools. “If we want other governmental units to stop eroding our ability to provide educational governance, we must exercise that ability more often and more effectively.” Smith said, “Where we can, we should work together with all segments of the public toward the improvement of the schools. But,” he concluded, “our responsibility is to all the people and we must view only the ‘big picture.’”[bold added]

Smith’s ability to foresee the implementation of site-based management, the downgrading of the importance of elected board members, and the transfer of power to public-private partnerships, etc., is to be lauded! While serving in the U.S. Department of Education I attempted to stop federally funded programs to train local school board members in conflict resolution and in how to implement effective school research. 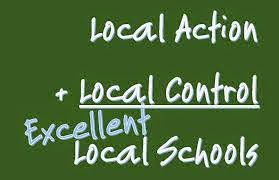 This 1977 information about George W. Smith can be found in my book the deliberate dumbing down of america, pages 145-146.
Posted by Charlotte Iserbyt at 8:39 AM