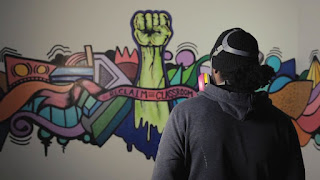 This mural decorates the walls of MasteryConnect's headquarters in Salt Lake City, Utah.

To see enlargement of the mural go to:

ACTION: Send this post to ALL members of Congress:

Send Emails to Congress on Any Topic | Letter2Congress

IS GREEN THE NEW RED?

Utah's multi-talented researcher, writer, and talk-radio host, Cherilyn Eagar, brought MasteryConnect (MC) and its Mural to our attention.  In an email alert, Cherilyn commented on the Mural:

"Notice the Fist on the back wall. This was - is - the symbol of militant marxism and communism.  The owner of the company said his goal is to "revolutionize education” and they invested in a chaotic, aggressive artistic design to illustrate their mindset.  This mural cost $25,000!

Cherilyn continued by saying, "MasteryConnect" (MC) is the Utah-based software company that provides tools for teachers to assess the performance of their students - a tracking system for mastery learning assessments for common core, but it stresses it is “agnostic core.”  In other words, it doesn’t matter what the label is, they have developed the software to track 6,000 standards for all mastery learning models, and they are getting millions of dollars and growing to international markets.  One of the presenters at Utah’s recent conference - Vander Ark endorsed this software.”

Apparently, a major thrust of MC is to “reinvent” report cards and change letter grades to a new Mastery Report Card.  This reinvention goes hand-in-hand with the Center for Reinventing Public Education (CRPE), whose goals appear to coincide nicely with Tom Vander Ark’s Smart Cities and Portfolio (Charter) Schools, and Marc Tucker's intent to put all education under the control of the state. It is useless to dismantle the U. S. Department of Education without also dismantling the State Departments of Education. What difference is there if the Federal Government or the State controls education and the student? None! The States have become clones of U. S. Department of Education. Clicking on this site of CRPE is a real eye-opener:  http://www.crpe.org/research/portfolio-strategy/get-started

You can learn more about MasteryConnect and their Mastery report cards at these sites:

WHY IS MASTERYCONNECT'S FIST GREEN?

And why does the background appear so chaotic?  Does the mural represent "SECOND ORDER CHANGE"?  Here's a definition of Second Order Change:

Does the Fist represent Communist/Socialism rising up out of the surrounding chaos of Second Order Change?  The owner of MasteryConnect did say he wanted to “revolutionize” education.

Is the Fist green to represent the UN/UNESCO Sustainability Goals to control all inhabitants of the world? Read the article by Tom DeWeese, entitled A New Agenda 21 Threatens Our Way of Life. http://www.newswithviews.com/DeWeese/tom267.htm

"Over the weekend of September 25 – 27, 2015, at the United Nations Headquarters in New York City (just as in the 1992 UN Earth Summit in Brazil) thousands of delegates, UN diplomats, representatives of Non-governmental Organizations, heads of state and the Pope, will converge to present a new fifteen-year plan entitled “Transforming Our World: the 2030 Agenda for Sustainable Development.” ". (Emphasis added) Note well the 17 goals described in this article.

Is the Communist "green" agenda of UN/UNESCO, seemingly depicted by the green fist, headed for the classroom with dashboards, charts, and graphs of companies like MasteryConnect to assure Total “Quality” Control of the student, now referred to as Human Capital?   K-12 and college texts and programs are saturated with lessons of UN Agenda 21 Sustainability and Social Justice.

The Communists and Socialists are the ones in control of UN Agenda 21 Sustainability, which is soon to become Agenda 2030.

"To further their goals of "Agenda 21", in 2012 the United Nations held their Rio+20 Conference on Sustainable Development. U.N. personnel illuminated the statue of Jesus Christ on top of Corcovado mountain with bright green lights. "Shortly before the conference began, green legend James Lovelock — the scientist and environmentalist who first came up with the whole 'Gaia' concept [earth worship...ed.}— warned that the 'green religion' was now 'taking over from the Christian religion.' Running the show at this conference was: 'The Secretary-General of Rio+20...anti-American Chinese Communist known as Sha Zukang... according to the high-ranking Communist Party operative, the Chinese dictatorship has 'broad prospects' for participation in 'international cooperation' on the issue of so-called 'sustainability'...'The executive coordinator of the Rio+20 summit, meanwhile, was French socialist Brice Lalonde...' " 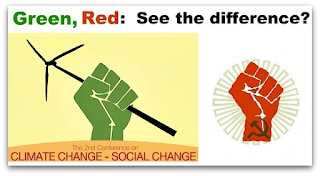 The Mantra for Sustainability is SOCIAL JUSTICE. Social Justice without the other two justices is Socialism. Common Good (Social Justice) is just one of the three requirements for a just society.  It must be accompanied by the other two divisions of Justice, Commutative and Distributive Justice, in order to form a genuine and harmonious Social Order. Otherwise, it is Communism.

"Social (Legal) Justice is one of the three legs of a stool required to establish and balance a true Social Order. The other two legs are Distributive Justice and Commutative Justice.

Social Justice refers to the “Common Good,” which encompasses the legal descriptions set down by civil society.

Commutative Justice encourages all men to observe the strict rights of others."

What part of the word C-o-m-m-u-n-i-s-m don't our educators, and our religious and political leaders understand? 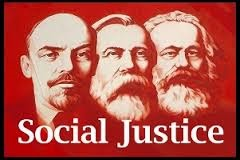 
Posted by Charlotte Iserbyt at 4:04 PM