THE DELIBERATE DUMBING DOWN OF MATH SINCE 1928!

ISN'T MAJOR MEDIA'S PRESENT HYPE A WEE BIT LATE? After all, there has been a virtual media blackout on this issue for decades!

The Wall Street Journal published an Opinion piece August 5 by Marina Ratner titled "Making Math Education Even Worse: American students are already struggling against the competition. The Common Core won't help them succeed." Dr. Ratner, a professor emerita of mathematics at the University of California, wrote about the dumbing down that is going on with Common Core Math Standards:


I first encountered the Common Core State Standards last fall, when my grandson started sixth grade in a public middle school here in Berkeley, Calif.... As a mathematician I was intrigued, thinking that there must be something really special about the Common Core. Otherwise, why not adopt the curriculum and the excellent textbooks of highly achieving countries in math instead of putting millions of dollars into creating something new?

Reading about the new math standards—outlining what students should be able to learn and understand by each grade—I found hardly any academic mathematicians who could say the standards were higher than the old California standards, which were among the nation's best. I learned that at the 2010 annual conference of mathematics societies, Bill McCallum, a leading writer of Common Core math standards, said that the new standards "would not be too high" in comparison with other nations where math education excels. Jason Zimba, another lead writer of the mathematics standards, told the Massachusetts Board of Elementary and Secondary Education that the new standards wouldn't prepare students for colleges to which "most parents aspire" to send their children.

It gets worse. She also explained the process of dumbing down the math standards, and then the consequences:

That there were "fewer standards" became obvious when I saw that they were vastly inferior to the old California standards in rigor, depth and the scope of topics. Many topics—for instance, calculus and pre-calculus, about half of algebra II and parts of geometry—were taken out and many were moved to higher grades....

It became clear that the new standards represent lower expectations and that students taught in the way that these standards require would have little chance of being admitted to even an average college....

Yet the most astounding statement I have read is the claim that Common Core standards are "internationally benchmarked." They are not. The Common Core fails any comparison with the standards of high-achieving countries.... [all emphases added] 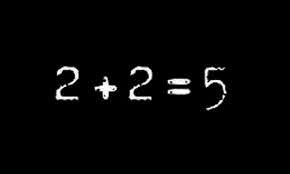 1928
A DELIBERATE MATH “DUMB DOWN” WAS SERIOUSLY DISCUSSED IN 1928. A TEACHER NAMED O.A. Nelson, John Dewey, Edward Thorndike (who conducted early behavioral psychology experiments with chickens), and other Council on Foreign Relations members attended a Progressive Education Association meeting in 1928 at which O.A. Nelson was informed that the purpose of “new math” was to dumb down students. Nelson revealed in a later interview with Young Parents Alert that the Progressive Education Association was a communist front. According to the National Educator (July, 1979):


Mr. O.A. Nelson, retired educator, has supplied the vitally important documentation needed to support the link-up between the textbooks and the Council on Foreign  Relations. His letter was first printed in “Young Parents Alert” (Lake Elmo, Minnesota). His story is self-explanatory.

I know from personal experience what I am talking about. In December 1928, I was asked to talk to the American Association for the Advancement of Science. On December 27th, naïve and inexperienced, I agreed. I had done some special work in teaching functional physics in high school. That was to be my topic. The next day, the 28th, a Dr. Ziegler asked me if I would attend a special educational meeting in his room after the AAAS meeting. We met from 10 o’clock [p.m.] until after 2:30 a.m.

We were 13 at the meeting. Two things caused Dr. Ziegler, who was Chairman of the Educational Committee of the Council on Foreign Relations, to ask me to attend... my talk on the teaching of functional physics in high school, and the fact that I was a member of a group known as the Progressive Educators of America, which was nothing but a Communist front. I thought the word “progressive” meant progress for  better schools. Eleven of those attending the meeting were leaders in education. Drs. John Dewey and Edward Thorndike, from Columbia University, were there, and the others were of equal rank. I checked later and found that ALL were paid members of the Communist Party of Russia. I was classified as a member of the Party, but I did not know it at the time.

The sole work of the group was to destroy our schools! We spent one hour and forty-five minutes discussing the so-called “Modern Math.” At one point I objected because there was too much memory work, and math is reasoning; not memory. Dr. Ziegler turned to me and said, “Nelson, wake up! That is what we want... a math that the pupils cannot apply to life situations when they get out of school!” That math was not introduced until much later, as those present thought it was too radical a change. A milder course by Dr. Breckner was substituted but it was also worthless, as far as understanding math was concerned. The radical change was introduced in 1952. It was the one we are using now. So, if pupils come out of high school now, not knowing any math, don’t blame them. The results are supposed to be worthless.

[Ed. Note: Mr. Nelson was formerly assistant principal at Wilson High School, Minneapolis, Minnesota, as well as Johnson High School in St. Paul. This writer was fortunate enough to verify the above story by calling a teacher colleague of the late Mr. Nelson. Also, members of the “Young Parents Alert” in Lake Elmo, Minnesota provided the writer with an audiocasette of the speech he gave at a Young Parents Alert education conference on April 28, 1979.]