For A One World Global Planned Economy 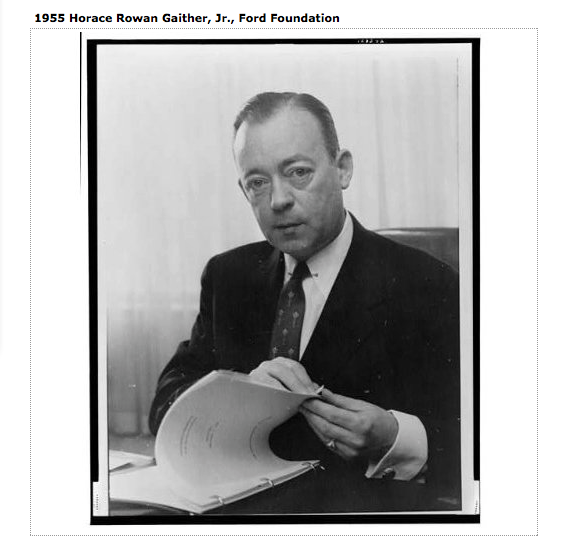 "Most of us here were, at one time or another, active in either the O.S.S., the State Department, or the European Economic Administration. During those times, and without exception, we operated under directives issued by the White House, the substance of which was to the effect that we should make every effort to so alter life in the United States as to make possible a comfortable merger with the Soviet Union. We are continuing to be guided by just such directives."
-H. Rowan Gaither (Source)

Is it too far-fetched to believe that in 1953 the President of  the Ford Foundation, the late Rowan Gaither, knew that charter schools, or some new form of public school governance, would be necessary to carry out the Soviet Polytech (workforce training) part of the "merger with the Soviet Union?"  Charter (contract schools) are also in Russia.


Mr. Dodd’s earlier suspicions of a political and economic conspiracy were confirmed. During his research for this committee [the Reece Committee], the president of the Ford Foundation, H. Rowan Gaither, Jr. told him that some of the giant foundations, including Ford, were working under directives from the White House to so alter life in America as to make possible a comfortable merger with the Soviet Union.

In light of this piece of factual information, connect the following dots. . .

Both Paul Berman and Paul Hill, longtime researchers for the Rand Corporation, are two of the most prominent master minds behind charter schools with their Communist unelected council form of government. Note these two key points in the excerpt from Berman paper below:
Paul Berman, the Executive Director for the Center for Policy Alternatives, and President of BW Associates, a consulting firm specializing in policy research and analysis in Berkeley, California, authored a key document, “The Next Step: The Minnesota Plan” (Phi Delta Kappan: Washington, D.C., Nov. 1985). Excerpts from this Minnesota Plan are contained in my book the deliberate dumbing down of america, Appendix X, p. A-43:


The challenge for American education is to provide a common and equivalent educational experience for all students and to prepare them for different careers. The comprehensive high school has not and cannot... meet either goal adequately.... The restructuring… offers a different approach to realizing these dual objectives of American education. All students would concentrate on a core academic program in grades 7 through 10 and then, in grades 11 and 12, choose further education that matches their career aspirations.

Research and practice in thousands of classrooms both in the U.S. and abroad indicate that instructional strategies using this assumption, such as mastery learning or cooperative learning techniques, can result in more students learning dramatically more in both basic and higher-order skills. The Minnesota Plan calls for these approaches to be taught to senior teachers who can then train other teachers to shift their expectations and instruction to enable all students to learn. Mastery learning [B.F. Skinner's operant conditioning, ed note] is controversial. However, the bulk of the evidence shows that large gains in student learning occur if teachers have the training and support to implement mastery learning effectively. Too often, mastery learning has been introduced as a “top down” innovation. The Minnesota Plan, by contrast, proposes a grassroots approach to implementation….

A publicly elected school-level board, operating in concert with a school-site management council, would decide which courses to offer at the school and which courses might be offered by other public schools or by other public or private providers. Schools would have the authority to “contract out” or “contract in” for teaching services.... This restructuring would take advantage of strength in the best European systems.... Deregulate curriculum and instruction. Educators should be free to design curriculum and instruction that they feel meets state standards and community needs. States should set basic goals; educators should be responsible to the community for helping students to meet these goals.

A restructuring of schooling could not realize its full promise without jettisoning the anachronistic system of employing course-unit/seat-time requirements as the criterion for student promotion and graduation. Advancement should be based on demonstrated achievement.... State-mandated course and graduation requirements would be eliminated in favor of a statement by the state of the competencies students are expected to master and two state tests, which would be required of all students before they leave the sixth and tenth grades. [emphases added]

Paul Hill's bio appears on the Center on Reinventing Public Education website, where we learn of his involvement with RAND:


Before joining the University of Washington faculty, Dr. Hill worked for 17 years as a Senior Social Scientist in RAND’s Washington office, where he served as Director of Washington Operations (1981-87) and Director of the Education and Human Resources program (1979-80). He conducted studies of site-based management, governance of decentralized school systems, effective high schools, business-led education reforms, and immigrant education, and contributed to studies of defense research, development, and acquisition policy. (Source)[emphasis added]


H. Rowan Gaither, Jr., a prominent San Francisco attorney who later served as president and then as chairman of the board of the Ford Foundation, was retained as legal counsel to determine the best means of setting up an independent RAND.

On May 14, 1948, RAND was incorporated as a nonprofit corporation under the laws of the State of California. The articles of incorporation set forth RAND's purpose in language that was both remarkably brief and breathtakingly broad:

To further and promote scientific, educational, and charitable purposes, all for the public welfare and security of the United States of America.