NO WAY, ESEA!
The ULTIMATE REVOLUTION


A 3D Research Report by a Grassroots Mother

Coming at us from every direction. . . . Lamar Alexander's blueprint for the Reauthorization of the ESEA agenda is based on an old roadmap developed by Aldous and Julian Huxley. Lamar's agenda can be sampled in these previous posts about his agenda HERE, HERE, HERE and HERE.

This agenda is being implemented across the country. From Texas, for example, as well as many other states, we find propaganda in the media promoting what the legislatures are now proposing as school mandates for mental health diagnosis and prescriptive measures meted out by teachers, based on rumor and arbitrary authority. From The Texas Tribune, "New Training to Promote Mental Health Intervention,"


Behavioral management courses are already offered in education programs at several universities, but they are usually limited to students majoring in special education...

The specialized behavioral management courses and training will fall under Positive Behavioral Interventions and Supports, or PBIS, a program promoted by a federal special education technical assistance center.

...PBIS training at the college level will change educators’ philosophy “from the ground up,” starting with new teachers. [emphasis added]

Mandatory mental health screening of children in school by teacher whimsy being legislated in states to bolster ESEA Reauthorization PARENTAL HANDCUFFS. A real Brave New World. Aldous Huxley's insights into education could not be closer to today's truth, and he would know.

A Texas lawmaker has introduced draconian legislation that would force parents to have their children undergo mental health screenings at the behest of teachers, under threat of suspension from school.

Parents would then have 30 days to comply with the ruling, or the child will be sent to “an alternative school”. The bill reads:


“ …the requirement that the parent or guardian, before the expiration of the 30-day period, to avoid suspension of the student under this section, take the student to the nearest local mental health authority or a physician specializing in psychiatry to receive a mental health screening and a certificate of medical examination for mental illness, as described by Section 533.03522(c), Health and Safety Code, that contains the examining physician’s opinion that the student is not a danger to self or others.” [emphasis added]


Now from Aldous Huxley circa 1962, "Aldous Huxley: The Ultimate Revolution." You can read the transcript or click on an MP3 HERE.  As you read the following excerpts from this transcript, think ADHD and Antidepressants....

"Today we are faced, I think, with the approach of what may be called the ultimate revolution, the final revolution, where man can act directly on the mind-body of his fellows....

"There will be, in the next generation or so, a pharmacological method of making people love their servitude, and producing dictatorship without tears, so to speak, producing a kind of painless concentration camp for entire societies, so that people will in fact have their liberties taken away from them, but will rather enjoy it, because they will be distracted from any desire to rebel by propaganda or brainwashing, or brainwashing enhanced by pharmacological methods. And this seems to be the final revolution.....

"I wrote thirty years ago, a fable, Brave New World, which is an account of society making use of all the devices available and some of the devices which I imagined to be possible making use of them in order to, first of all, to standardize the population, to iron out inconvenient human differences, to create, to say, mass produced models of human beings arranged in some sort of scientific caste system.... 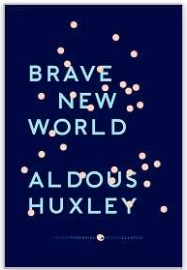 "...but I think sooner or later you have to bring in an element of persuasion an element of getting people to consent to what is happening to them....

"It seems to me that the nature of the ultimate revolution with which we are now faced is precisely this: That we are in process of developing a whole series of techniques which will enable the controlling oligarchy who have always existed and presumably will always exist to get people to love their servitude...." [emphasis added]


Aldous Huxley, author of famed dystopian novel Brave New World, seemed to have a cheat sheet for today's society. This could be because of his global elite insider family ties, such as his grandfather evolutionist theory pusher Thomas Huxley, known as "Darwin's Bulldog," or his famous brother Julian Huxley who was the first secretary General of UNESCO. Below are some graphics with links to articles about the Huxleys and their influence in building this New World Order:
From the excellent website http://www.crossroad.to of Berit Kjos, author of BRAVE NEW SCHOOLS, comes the following webpage about UNESCO with quotes from Julian Huxley:
We must never forget that the Huxley's were deeply involved in the eugenics movement a century ago, and that these disturbing ideas permeate education reform to this very day. For example, the following webpage:


Aldous Huxley's insights into education in his 1962 talk at USC could not be closer to today's truth. These bills and stealth implementation tactics in schools, using smokescreens and manipulation of the public through deception and propaganda, have already damaged society and many children. This agenda is now coming at parents at an alarming rate through legislation. 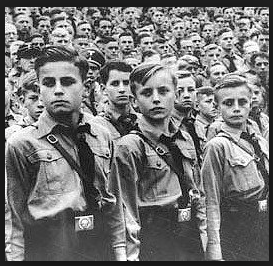 This is the
ULTIMATE REVOLUTION
for our children's souls!
ARE YOU GOING TO STAND FOR IT?
OPT OUT NOW!
STOP the ESEA!

Read more at this blog:
WE ARE AT WAR!
Common Core Trotskyites
Nazi Nuts and Bolts of Common Core?
"Birds of a Feather Flock Together"
FINNISH Education will FINISH Freedom

Posted by Charlotte Iserbyt at 7:26 AM