Charter Schools - Brainchild of the Left...


...that became the Agenda of the Political Right

Who would have guessed that tax-funded school choice/charters with unelected boards, ostensibly promoted by neoconservatives and corporations, is, in fact, a brain child of the NEA and leftist education change agents? And has been since Carnegie Corporation's Eight Year Study 1933-1941, the pilot for Outcomes Based Education??

Read all about it in my book the deliberate dumbing down of America, page 169:


The scanned copy of the 1981 original 76-page request for federal funding of this tax-funded school choice plan is available at American Deception.com website on this webpage (click HERE). 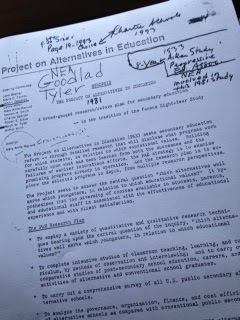 
Note the Steering Committee list which is headed up by leading change agents such as John Goodlad and Ralph W. Tyler. Extremely important document on John Dewey Society letterhead, which spells out high school restructuring and calls for revolutionary changes in education suitable for school to work training. Clearly this was an early part of the school choice agenda. It demonstrates early NEA involvement.

Posted by Charlotte Iserbyt at 7:36 AM