If you, the reader, can help People LLC financially with their important law suit, please do so. Winning this lawsuit in Louisiana  will benefit all of us nationwide in this battle to protect children's, parents' and teachers' rights.

The 2015 session of the Louisiana legislature included several attempts to remove the privacy protections of public school students contained within Act 837--protections which this same legislature had passed unanimously and the governor signed into law just one year ago.

No attempt was more egregious than that of HB 245 by Rep. Henry.

At the onset, HB 245 was a good bill. The intent was to prevent the state from using content standards and state assessments to measure emotional, physical, or psychological characteristics, attributes or skills of our children. The Louisiana Dept. of Education added amendments which proposed to actually ALLOW such measures to be taken on ALL public school students in Louisiana.  The bill, as amended, was reported favorably to the full House and eventually became Act 384.

The passage of HB 245 into law was the legislature's, LDOE's and Gov. Jindal's attempt to ignore the fact that Act 837 of 2014 prohibits school districts from requiring the collection of certain information from students.  This information includes biometric and psychological information and can only be collected if voluntarily disclosed BY THE PARENT.

LOUISIANA HAS ANOTHER SET OF LAWS THAT ARE VERY IMPORTANT:

Our Open Meetings Law states that, “Reasonable public notice of meetings of legislative committees and subcommittees shall be given in accordance with such rules as are adopted by the respective houses for the purpose.”

According to the House Rules, the author of a bill or the representative presenting the bill on behalf of the author may voluntarily defer a bill.  This is usually done when they realize that they do not have the committee votes to report the bill favorably to the full House.

Should a bill be voluntarily deferred, it can be rescheduled.  The House Rules for scheduling a bill require that proper public notice be given so that citizens will be able to follow the legislation.  There are several aspects of “proper notice” which include a listing of the instruments to be considered, as well as, the date, time and location of the committee meeting in which they will be heard.

On May 20, 2015, the House Education Committee heard HB 245 (Rep. Henry) as it was presented on his behalf by Rep. Paul Hollis.  Gov. Jindal’s Asst. Chief of Staff was also at the table in order to answer any questions the committee may have had.  Ultimately, Rep. Hollis voluntarily deferred HB 245.
﻿
At that point, if Rep. Henry wanted another hearing of his bill, HB 245 should have been rescheduled for a future committee meeting in accordance with House Rules.  Instead, and with an assist from Chairman Stephen Carter, this is what happened:

The agenda of this administration is clear:  No matter what the law mandates, the state intends to continue to gather data on our children as if they were lab rats in a cage while using compulsory education law as a means of trapping them in a system that uses non-academic measures to determine what career path students may choose and to decide whether students may attend community college or university.

They may very well complete their agenda, but it won't be because we let them!  At the very least, we should expect our legislature to follow its own rules in keeping with Louisiana's Open Meetings Law:

The People, LLC have filed suit in an effort to have Act 384 (Henry-HB 245) declared void. It is our contention that it was illegal for HB 245 to have been brought back up for discussion at the same committee meeting in which it had been voluntarily deferred; and, instead, should have been rescheduled according to the Rules of the House. 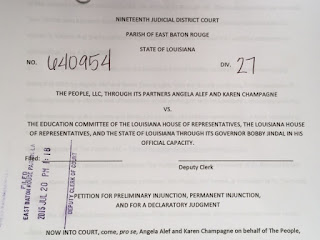 Several people have expressed interest in helping with the cost of this lawsuit.  We certainly appreciate any and all assistance!   If you would also like to help in this way, there is a "Donate" button at the top, right-hand corner of this page.  (Go to link  at the top of this post)

Posted by Charlotte Iserbyt at 6:19 AM