The Country That Saved Itself

Seldom has a major nation come closer to the brink of
disaster and yet recovered than did Brazil in its recent
triumph over Red subversion. The communist drive for
domination-marked by propaganda, infiltration, terror
-was moving in high gear. Total surrender seemed imminent--
and then the people said No!This dramatic and illuminating account not only tells of
a people's determined defense of their freedom, it provides

a blueprint for action by concerned citizens in other nations threatened by communism.


THE COUNTRY THAT SAVED ITSELF
By CLARENCE W. HALL Senior Editor, The Reader's Digest

THE COUNTRY THAT SAVED ITSELF - American Deception

"Of its significance Lincoln Gordon,U.S. ambassador to Brazil,says, "Future historians may well record the Brazilian revolution as the single most decisive victory for freedom in the mid-20th Century.This was a homegrown, do-it-yourself revolution, both in its conception and accomplishment. Not one U.S. dollar or brain cell was involved!"


"The agents soon discovered a Red Trojan horse of far more frightening dimensions than anyone had imagined.  Many masked communists, "planted"in federal departments and agencies years before, had by now wormed themselves into key posts."
"The communists in government agencies usually were not ministers but upper-level advisers, sometimes second-in-command, or drafters of reports on which top decisions were based.  Some openly bragged, "We don't care who makes the speeches so long as we write them!"

...First to take action were the women of Sao Paulo.  Listening on radio and TV to the March 13 rally, hundreds of housewives rushed to their telephones to begin organizing a a demonstration that would make Goulart's seem tiny by comparison.Six days later, on March 19, the wide thoroughfares of downtown Sao Paulo were jammed with what the women called  "The March of the Family With God Toward Freedom." Clutching prayer books and rosaries, a vast army more than 600,000 strong marched in solemn rhythm under anti-communist banners.  And as they marched, newshawks on the sidelines sold newspapers containing a 1300-word proclamation the women had prepared:

"This nation which God has given us, immense and marvelous as it is, is in extreme danger.  We have allowed men of limitless ambition, without Christian faith or scruples, to bring our people misery, destroying our economy, disturbing our social peace, to create hate and despair.  They have infiltrated our nation, our government administration, our armed forces and even our churches with servants of totalitarianism, foreign to us and all-consuming...Mother of God, preserve us from the fate and suffering of the martyred women of Cuba, Poland, Hungary and other enslaved nations!"

One bystander called the Sao Paulo women's march "the most moving demonstration in Brazilian history".  Days later, similar marches were scheduled for several of the nation's major cities.  Efforts by the government to discourage them, and threats by police to break them up, failed to halt the crusading women.
For the rest of this remarkable, historical account, please click here: 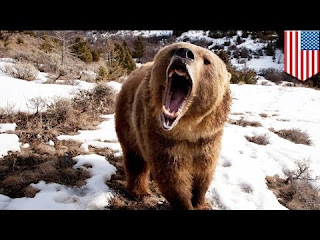 www.youtube.com
What is it going to take for American mothers to act as mama grizzlies?!?

Posted by Charlotte Iserbyt at 4:43 PM