The latest installment in a series from Dr. Dennis Cuddy, "Common Core: Part 3" was published on NewsWithViews, March 30, 2015. Dr. Cuddy wrote about a trip that the "'Father of Progressive Education' (and later National Education Association honorary president) John Dewey" took to the Soviet Union in the earliest years of Communism. Of course, Dewey was the forerunner, laying all of the groundwork for all of the future education reform. I discuss Dewey and his Progressive Education Association in my book the deliberate dumbing down of america.

According to Dr. Cuddy, John Dewey described his trip to the Soviet Union in a Dec. 5, 1928 edition of THE NEW REPUBLIC. Here are a few snippets from the glowing report that Dewey wrote of Communist education: 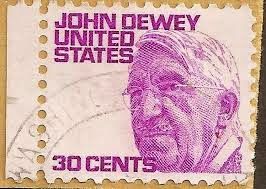 "the marvelous development of progressive educational ideas and practices under the fostering care of the Bolshevist government... the required collective and cooperative mentality.... The great task of the school is to counteract and transform those domestic and neighborhood tendencies... the influence of home and Church....

"In order to accomplish this end, the teachers must in the first place know with great detail and accuracy just what the conditions are to which pupils are subject in the home [remember this when reading about Common Core's collection of large amounts of personal data]....

"In consequence, to anyone who looks at the matter cold-bloodedly, free from sentimental associations clustering about the historic family institution, a most interesting sociological experimentation is taking place.... Our special concern here is with the role of the schools in building up forces and factors whose natural effect is to undermine the importance and uniqueness of family life....

"The earliest section of the school system, dealing with children from three to seven, aims to keep children under its charge six, eight, and ten hours a day, and in ultimate ideal this procedure is to be universal and compulsory....

"Reference to this phase of Soviet education may perhaps be suitably concluded by a quotation from Lenin: 'We must declare openly what is concealed, namely, the political function of the school.... It is to construct communist society.'"

Posted by Charlotte Iserbyt at 7:39 AM