Because the Modernists and Neo-Modernists believed that there was no longer any certainty of what God had revealed, religious knowledge would have to become sourced through the "inner experience" of mysticism and contemplation. Like the Modernistic theologians of pre and post-Vatican II, some Catholics thinkers and clerics in the Renaissance period also made the case for inner experience. They discredited Scholasticism by poisoning it with the Humanism of classical antiquity and the pagan system of Neoplatonic mystical contemplation. 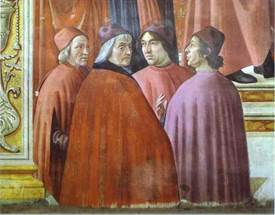 "The Renaissance Men"
During this Renaissance period, the Platonic Academy of Florence was founded by the Greek, Georgius Gemistus Pletho. (1355-1452/54) It was then led by Marsilio Ficino (1433-1499), Giovanni Pico della Mirandola (1463-1494), Nicholas of Cusa (1401-1464), and Bishop Basilios Bessarion (1403-1472). Pletho pioneered a Greek revival in Western thought through his teachings on Neo-Platonism. As he was a polytheist, he advocated a return to the ancient Olympian Gods, and he also promoted the reorganization of the Byzantine Empire according to Plato’s Republic. Bishop Bessarion was Pletho’s pupil.

The cleric, Ficino, was one of the most important of the Renaissance thinkers. His Platonic Theology, much like some Modernist thinkers, included an animistic natural philosophy, according to which a World Soul is imminent in the material world, imparting motion, life, and order. He held that this monadic pagan tradition, including "natural magic", espoused a pious philosophy that in fact presaged and confirmed Christianity. The teachings of Pico, along with Neoplatonism contemplation, magic, Hermeticism, and "Platonic Love/homoeroticism" were embedded in the Platonic Academy of Florence.

Some claimed the teachings of St. Augustine to justify their heresies. However, St. Augustine knew the writing of Plotinus and was obliged to exclude his interpretation of Platonism and the many tenets of the Neo-Platonic school. Some of his earlier work included Neo-Platonic concepts, but eventually he abandoned those after studying the Bible. Even so, apparently there was still much of medieval "Augustinianism" that was too near Protestant belief and it was rejected by the Council of Trent in 1545.

The inner experience of the contemplation of Neoplatonism and the Renaissance might be understood by looking at the work of an early major Neoplatonist thinker, Plotinus (A.D. 205-270), who belonged to the Platonic Academy of Athens. This Academy taught that God (Monad) was an Over-Being or over-Mind. From this Over-Being emanates the Intellect (Nous). The Intellect then emanates the World-Soul and from the World-Soul emanates the Forces including the human soul. He taught that man, being part body and soul, was both spiritual and material. It was man’s duty to return to God. To do this, the soul withdraws from the world by purification, contemplation of the intellect, and contemplation of God. Through this ecstasy granted by God, man becomes a spiritual being. He commands all the powers of nature and bends the will of demons. He sees into the future and shares the vision of God. 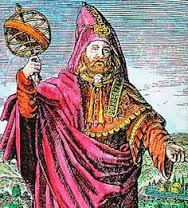 In Plotinus’ "Enneads", his system reveals a mystical syncretism of the previous philosophies "—an emanative and pantheist Monism absolutely indetermined, the absolutely Good through emanations (logoi spermatikoi), matter inactive, and the principle of imperfection. The human soul had its existence in the world-soul until it was united with matter." (1) Contemplation rejoins the human soul to God, and, thus, man becomes God. "Emanationism" was condemned by the Church long ago.

Compare the above to the true Christian mystical contemplation with its Purgative, Illuminative, and Unitive steps. "Those supernatural acts or states which no effort or labour on our part can succeed in producing, even in the slightest degree or for a single instant, are called mystical.  Mystical states are called, first, supernatural or infused, by which we mean manifestly supernatural or infused; secondly, extraordinary, indicating that the intellect operates in new way, one which our efforts cannot bring about; (Emphasis, Ed.) (2)

"A tendency so universal and so persistent as that of Mysticism, which appears among all peoples and influences philosophical thought more or less throughout all centuries, must have some real foundation in human nature. There is indeed in the human soul a natural desire for, an aspiration towards the highest truth, the absolute truth, and the highest, the infinite good. We know by experience and reason that the knowledge and enjoyment of created things cannot give the fullness of truth and the perfection of beatitude which will completely satisfy our desires and aspirations. There is in our soul a capacity for more truth and perfection than we can ever acquire through the knowledge of created things…. The Catholic Church, as guardian of Christian doctrine, through her teaching and theologians, gave the solution of the problem. She asserted the limits of human reason: the human soul has a natural capacity (potentia obedientialis), but no exigency and no positive ability to reach God otherwise than by analogical knowledge. She condemned the immediate vision of the Beghards and Beguines …the pseudo-Mysticism of Eckhart… and Molinos…the theories of the Ontologists…and Pantheism under all its forms... as well as the vital Immanence and religious experience of the Modernists…Protestantism, by its negation of all ecclesiastical authority and by advocating a direct union of the soul with God, had its logical outcome in a Mysticism mostly pantheistic." (Emphasis, Ed.) (3)

The Renaissance thinker, Nicholas of Cusa, seems to be a mentor to some of the Nouvelle theologians. He was especially concerned with "scientism", which was used by anti-clericals as well as religious scholars to deny the truth of Catholic Traditions, Dogma, and ecclesiastical authority. At one point, he supported the supremacy of the general councils over the authority of the Pope. He included the elements of mysticism and Platonism into Christian Faith. "Nicholas was instrumental in developing the concept of ‘panentheism,’ the idea that God is present in all things and yet transcends all things. His fundamental precept, ‘coincidentia oppositerum’ (the ‘coincidence of opposites’), was a key concept of the Reformation and replaced the medieval belief that God was a separate entity from the material world. Nicholas of Cusa is seen as one of the transitional thinkers from the Medieval to the modern world." (4) Cusa’s premise denies biblical and Catholic Church teaching that God created the world from nothing, or ex nihilio. If this is the case, it would mean that God "made" the world out of pre-existing ether, waves, substance, or whatever else one might call it. This would make God a "Maker" instead of "Creator". This presumed substance, ether or waves, has engendered the search for the "Unified Field of Everything". Pius X called out modernist Integralists, as those who believe that hidden in the being of man is the very germ which Christ Himself had in His consciousness, and which he transmitted to mankind. (Pascendi, 37). Has this kind of integralism, combined with the search for the "Unified Field of Everything", given rise to current thinkers like Ken Wilber, who espouses an Integral Spirituality? Wilber’s Unified Field of Everything" is composed of Neurobiology, Jungian archetypes, hermeneutics, Hegelian dialectics, Hinduism, and Neo-Platonic forms to name a few. [Manson] 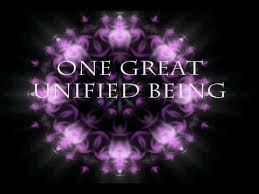 Unified Field of Everything?


Giovanni Pico della Mirandola, also a leader of the Platonic Academy of Florence, was a student and associate of Ficino’s. Pico attempted to combine Greek, Hebrew, Muslim, and Christian thought into a synthesis published under the name of "Conclusions" which was condemned by Pope InnocentVIII. Syncretism, or the blending of religions, has always been condemned by the Church. Pico exalted the powers of human nature and defended the use of magic, which he saw as a part of natural science and the Kabbalah, originating in Neoplatonism.

Pico also wrote The Oration on the Dignity of Man. In this work he included the ancient wisdom of those including Zoroaster, Pythagoras and the" Hebrew Cabalist wisemen". "Pico was citing the Hermetic text Asclepius with its promise of man’s equality with the gods: ‘Man is a miracle, a living thing to be worshipped and honored: for he changes his nature into a god’s, as if he were a god. . . . Conjoined to the gods by a kindred divinity, he despises inwardly that part of him in which he is earthly." (5) Obviously this thinking also incorporated Gnostic teachings. Pico was a student of the Jewish Kabbala and he was thoroughly versed in the works of Jewish medieval Kabbalist commentators. All these elements assisted Pico in formulating a synthesis of ancient esoteric, religious, and philosophical ideas which he enumerated and set forth in his humanistic "Oration on the Dignity of Man". [Armstrong] His work was deemed heretical and suppressed or quashed by the Pope. Pico also subscribed to "centering within" to attain unity with God. Does the current and modern practice of "The Centering Prayer" or the current emphasis on "The Dignity of Man", under the influence of Personalism, have any connection to Pico’s concepts? It is important to understand that Pico and his work on the Kabbala had a profound influence on Western thought.

The Sephirot of the Kabbalah

The Kabbalah is a Jewish form of mysticism comprised of the Sephirot with ascending spheres for contemplation to join with "the unknown god". These ten emanating spheres have names and are both feminine and masculine, however, they have the power to change their gender through "vibrations" and androgynous middle of pole of the Kabbalah. Union with God can be attained through the feminine Queen goddess of the Kabbalah, Shekinah or Malkut. She is the lowest emanation of the Kabbalah and the consort of Keter who is the top or crown of the Sephirot. She is Keter’s feminine spirit or soul of the world. Thus she is at the bottom of the Sephirot and "in the world" where contemplation begins. The contemplator then moves up through the spheres to the Godhead. In the Jewish Bible, the word, Shekinah, meant the Divine Presence (from shakhan, to dwell), hence the Divine Glory had been suggested by the belief in God’s presence in a cloud over the Ark of the Covenant. Some consider the Shekinah to be the Holy Spirit, thus making the Holy Spirit feminine. There may be a distinction from the Old Testament Jewish Bible’s concept of Shekinah, and the later Cabalistic approach, or they may be interrelated. It is interesting to note that Peter Abelard (1070-1142) a monk and pre-eminent French theologian of the 12th Century, held a pantheistic view that the Holy Spirit was the soul of the universe. His errors were condemned by the Council of Sen in 1140.

How closely is the Nouvelle Theologian, Teilhard de Chardin, or other Modernists’ thinking aligned to Neoplatonic contemplation reflected in the Kabbalah? Chardin’s influence has spread far and wide in the Church. He speaks about the Nous and the ascendance of mankind to the pinnacle of "God", as well as spiritual evolution. Can we assume then that in some of the teachings of Nouvelle Theology we are all "becoming" and on our way to "being fully human" to be joined to "God", and then become God? All Chardin’s pantheistic flavored work was proscribed by the Church

Were the modernist and neo-modernist Nouvelle Theologians, with their call to a return to "mystery" and to the Greek Fathers, inspired by some beliefs of "utrasupernaturalism" (spiritualistic beliefs and manifestations) existing in the Church of Corinth and elsewhere in the first centuries? Ultrasupernaturalism, with its embrace of direct personal access to God, coincides with Neo-Platonic views. Such movements led to the denial of the indefectibility of the Church (lasting until the end of time) and an end to the Christian Dispensation and the visible Church, and the beginning of the spiritualistic "Age of the Spirit" to be discussed in a future report.


Posted by Charlotte Iserbyt at 5:47 PM