A Deliberate Math Dumb Down?

The Influence of Thorndike Lives On....


Beware! When  the  media mouthpiece for the neoconservative education agenda (The Wall Street Journal) uses words "true mastery" and "practice," parents MUST understand that "they" are
recommending use of the Skinnerian Direct Instruction although "they" obviously aren't going to tell parents that!

This kind of education, which is not simple rote learning, but is Skinnerian mastery learning/direct instruction, is suitable for workforce training and no more.

Parents are for the umpteenth time being taken to the cleaners by the so-called "experts" who get the most media! 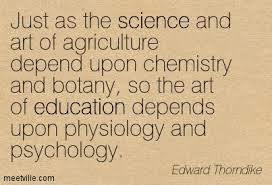 The Wall Street Journal article I'm talking about was posted on September 22nd and titled "How We Should Be Teaching Math." This article, authored by Barbara Oakley, an engineering professor, was subtitled "Achieving 'conceptual' understanding doesn't mean true mastery. For that, you need practice." That part of the title is what caught my eye. Uh-oh. "True mastery." "Practice." Here we go again. The article begins:


One of my engineering students recently approached me with a mixture of anger and befuddlement, thrusting toward me a quiz sheet covered with red pen marks: "I just don't see how I could have done so poorly. I understood it when you taught it in class."

...He still thought that because he "understood" the material, he was all set.

I'm now a professor of engineering,... What I discovered when I started over at age 26—first tackling remedial middle-school math and then working my way toward a Ph.D. in systems engineering—is that a conceptual understanding only gets you so far.

Conceptual understanding has become the mother lode of today's approach to education in science, technology, engineering and mathematics—known as the STEM disciplines. However, an "understanding-centric approach" by educators can create problems.

This well educated engineer thinks she has a better idea. But beware of her solution! Watch her rhetoric and note the words I put in bold. Notice that the students are hooked up to a computer and must take quiz after quiz until they attain "true mastery. This is Skinner's original Programmed Instruction at work:


...[T]he development of true expertise involves extensive practice so that the fundamental neural architectures that underpin true expertise have time to grow and deepen. This involves plenty of repetition in a flexible variety of circumstances. In the hands of poor teachers, this repetition becomes rote—droning reiteration of easy material. With gifted teachers, however, this subtly shifting and expanding repetition mixed with new material becomes a form of deliberate practice and mastery learning....

...[J]ust because a student might think he understood an idea... doesn't mean that he has mastered the idea.

My angry, befuddled student, and many like him in my class, went on to take quiz after carefully designed quiz—all on the computer, and all designed to help students get the practice that would allow them to gain true mastery.

Understanding is key. But not superficial, light-bulb moment of understanding. In STEM, true and deep understanding comes with the mastery gained through practice. [emphasis added] 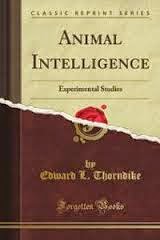 It is significant that an engineering professor wrote the above article. She is suggesting Mastery Learning, a derivative of the Skinnerian operant conditioning. Education in the USA is now the Soviet polytech (dumbed-down workforce training) system, with no grades, no competition, etc. Certainly NOT academics! Engineering becomes a rote activity, no creativity. So remember this as you read on. (Also, remember that President Reagan signed agreements with Soviet President Gorbachev in 1985 that merged the USA and USSR education systems.)

We in Maine had Soviet educators training our teachers in how to implement workforce training - back in 1995. The Bangor (Maine) Daily News published an article on Jan. 12, 1995 titled “RUSSIAN TEACHER REVIEWS WORK IN SAD 53” explaining the extent of cooperation between Russia and the U.S. in school-to-work (planned economy) activities. According to Seekins’s research these activities were not confined to ivory tower musings, but had penetrated education at the local level. Some excerpts follow:

...Cummings told the board that MCI will be the recipient of the School-to-Work funding in conjunction with the Maine Youth Apprenticeship Program.

The school could receive up to $8,000 to provide staff training to better integrate academics with the program provided by apprentices’ worksites. (the deliberate dumbing down of america, p. 345-46)


A history lesson is in order. The powers-that-be don't want you to know this history. One has to go clear back to 1928 when a similar argument for dumbed-down math was being made by Communist educators at a meeting of the Progressive Education Association. Edward Thorndike, who conducted early behavioral psychology experiments with cats, along with other Council on Foreign Relations members, attended a this meeting at which the attendees were informed that the purpose of "new math" was to dumb down students. We know all this because an attendee at the meeting, O.A. Nelson, an educator, later spilled the beans:


"I know from personal experience what I am talking about. In December 1928, I was asked to talk to the American Association for the Advancement of Science. On December 27th, naïve and inexperienced, I agreed. I had done some special work in teaching functional physics in high school. That was to be my topic. The next day, the 28th, a Dr. Ziegler asked me if I would attend a special educational meeting in his room after the AAAS meeting. We met from 10 o’clock [p.m.] until after 2:30 a.m. We were 13 at the meeting. Two things caused Dr. Ziegler, who was Chairman of the Educational Committee of the Council on Foreign Relations, to ask me to attend... my talk on the teaching of functional physics in high school, and the fact that I was a member of a group known as the Progressive Educators of America, which was nothing but a Communist front. I thought the word “progressive” meant progress for better schools. Eleven of those attending the meeting were leaders in education. Drs. John Dewey and Edward Thorndike, from Columbia University, were there, and the others were of equal rank. I checked later and found that ALL were paid members of the Communist Party of Russia. I was classified as a member of the Party, but I did not know it at the time. 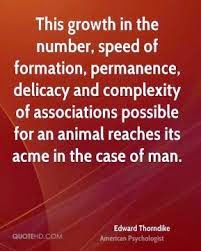 "The sole work of the group was to destroy our schools! We spent one hour and forty-five minutes discussing the so-called “Modern Math.” At one point I objected because there was too much memory work, and math is reasoning; not memory. Dr. Ziegler turned to me and said, “Nelson, wake up! That is what we want... a math that the pupils cannot apply to life situations when they get out of school!” That math was not introduced until much later, as those present thought it was too radical a change. A milder course by Dr. Breckner was substituted but it was also worthless, as far as understanding math was concerned. The radical change was introduced in 1952. It was the one we are using now. So, if pupils come out of high school now, not knowing any math, don’t blame them. The results are supposed to be worthless."(Emphasis added. Excerpted and adapted from page 14-15 of my book)

For a bit of history, here is what Edward Thorndike was doing in animal psychology at that time:


Thorndike was a pioneer not only in behaviorism and in studying learning, but also in using animals in psychology experiments. Thorndike was able to create a theory of learning based on his research with animals. His doctoral dissertation, “Animal Intelligence: An Experimental Study of the Associative Processes in Animals”, was the first in psychology where the subjects were nonhumans. Thorndike was interested in whether animals could learn tasks through imitation or observation. To test this, Thorndike created puzzle boxes. The puzzle boxes were approximately 20 inches long, 15 inches wide, and 12 inches tall. Each box had a door that was pulled open by a weight attached to a string that ran over a pulley and was attached to the door.The string attached to the door led to a lever or button inside the box. When the animal pressed the bar or pulled the lever, the string attached to the door would cause the weight to lift and the door to open. Thorndike’s puzzle boxes were arranged so that the animal would be required to perform a certain response (pulling a lever or pushing a button), while he measured the amount of time it took them to escape. Once the animal had performed the desired response they were allowed to escape and were also given a reward, usually food. Thorndike primarily used cats in his puzzle boxes. (Emphasis added, links removed. Keep reading HERE)

Keep in mind that all of this is talking about CHILDREN. In keeping with this month's theme, this graphic says it all. Skinner continued Thorndike's work: 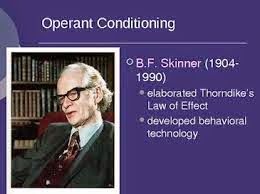 Posted by Charlotte Iserbyt at 6:39 AM