LITERACY PIONEER FIRES SHOT ACROSS BOW OF THE DELIBERATE DUMBING DOWN 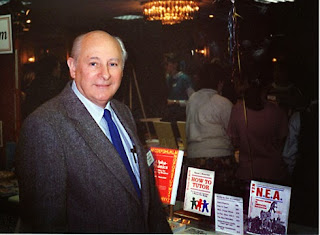 Samuel Blumenfeld's new book  “Crimes of the Educators,” which has surged to No. 379 on Amazon’s list of bestselling books overall, chronicles the primary reason for the dumbing down for our nation.

If the multi-billion tax dollars spent on the deliberate dumbing down of our children had been spent on teaching reading using Samuel Blumenfeld's Alpha Phonics www.howtotutor.com, we should have close to a 100% literate society instead of what we see around us today: a dumbed down society which has almost reached the "grunting" level.

(Total 2015 education spending in discretionary terms at the federal, state and local levels exceeds that of US defense spending)

Instead, your hard-earned tax money was spent on implementing through the Hegelian dialectic (cause problem, people scream, impose solution) socialist John Dewey's preferred reading instruction method, known to most of us as the Dick and Jane whole word (look-say) reading primers.  When this disastrous method was partially exposed, with voices of parents rising to an angry, frustrated pitch, along came the supposed cure, La-La-Land Whole Language (reading and writing instruction), the craziest most destructive of all supposed cures. Then, when the voices of parents rose to an even more frustrated and angrier pitch, the Skinnerian/Pavlovian tried and true brainwashing method for teaching "anything", which is really nothing but "training", was resurrected from the Leipzig, Germany laboratory of Wilhelm Wundt (late 1800s) by the clever globalist education change agents who had finally reached their destination: getting the American people to accept anything, in which case the "thing" was what the change agents had wanted all along:


The method to be used was not just for dumbing down academically and intensive value change, but for the long-sought goal of "training your child" for the global workforce.   This method, known as Skinnerian/Pavlovian Mastery Learning (ML), Outcomes Based Education (OBE), or  Direct Instruction (DI) is the method sought by the Carnegie Corporation since the early nineteen thirties. (For more information go to  www.deliberatedumbingdown.com 3D, pages 20-21, for The Eight-Year Study, initiated by the Commission on Relation of School and College of the Progressive Education Association in 1932).

The reason behind the need for the method is expounded in Carnegie's 1934 book "Conclusions and Recommendations for the Social Studies", which calls for changing the United States capitalist economic system to a planned economy and, in some cases, recommends "taking your land". Free download at www.americandeception.com.  Type "Conclusions" into the search engine.


Please refer back to Sticht quote: 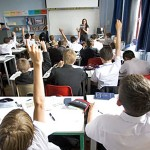 Newman offered a simple plan for overcoming the educators’ crimes and improving the American education system: Return education policy to the local level, where parents and teachers will be free to try what actually works.

“The first thing I would do is shut down the entire department [of Education] and fire every bureaucrat in it, because the Department of Education has probably been the single worst thing to ever happen to education in this country,” he asserted....

“The foundation of it all is high literacy,” he said. “We need to get back to phonics. Then children can acquire knowledge independently."

Posted by Charlotte Iserbyt at 9:34 AM