An Open Letter to the Oklahoma Parents, Teachers, and Legislators

Arthur Conan Doyle really hit the nail on the head when he said:


“There is nothing more deceptive than an obvious fact.”
― Arthur Conan Doyle, The Boscombe Valley Mystery Quotes

Doyle, if he were alive, would use the following Marjorie Ledell quote to illustrate perfectly the truth of his comment. Ledell's statement is too obvious, too clear, the intent so blatant... that good parents do not understand what she is saying. Out of the mouth of a leading American education change agent associated with the National Education Association, the Association for Supervision and Curriculum Development, et al. “TO OBE OR NOT TO OBE?” was the question posed by Marjorie Ledell, associate of William Spady’s in his High Success Network, in her article for Educational Leadership’s January 1994 issue. From page 18 we read:

Finally, raise the real issue and depend on democracy. Don’t let “to OBE or Not to OBE” or “to implement or not implement efforts to improve student learning” cloud the  overdue national debate about whether public education should exist or be  replaced with publicly funded private education.

The following Open Letter should be distributed far and wide across the Internet. Permission is given to re-post in its entirety without alteration. It should also be printed as a flyer. It should be mailed, e-mailed and handed out to activist groups, parents, teachers, legislators, next-door neighbors, friends, family, etc.


An OPEN LETTER to Oklahoma
Parents, Teachers, and Legislators:
Re: "The Fake Repeal of Oklahoma Common Core Standards"
An Open Letter from Anita Hoge

Let's applaud parents, teachers, and legislators who want to protect their children and are trying to do the right thing. Unfortunately, Oklahoma's HB 3399 that was passed in your state last week that made national headlines is pretty much off track. Governor Fallin and Superintendent Barresi are not your friends. The following is why.

There are many organizations and leaders in your state and other states who do not do their research. There are some that have an agenda. The battle against Common Core is not being fought with the right focus. First, understand that once your state agrees to move to a standards-based system, you have already lost your power by transferring your voice to another authority. Parents, that authority is not you! Neither is that authority your local school board or the teacher in the classroom.

This federal shift in power has been missed completely in the discussions about Common Core. This is about the individual mandate in education, where standards are mandated for the individual student. This is also a federal agenda to allow federal Title I money to "follow the child," to identify your child for the longitudinal data system for remediation toward Common Core goals using Individuals with Disabilities in Education Act (IDEA) funds called Oklahoma Statewide System of Support using the Wise Tool. Please see page 94 of the Elementary and Secondary Education Act (ESEA) Flexibility Waiver for details.

So your focus in fighting this battle against Common Core is because parents believe Common Core is bad for their students, schools, and teachers. I agree. But who is leading you in this battle?  Why have these leaders not focused on what is happening in the schools right now? Why haven't your leaders known about the ESEA Flexibility Waivers that are putting Common Core in place under the radar with new names?  HB 3399 actually states that Oklahoma will use the standards to your ESEA Flexibility Waiver. How did these leaders miss that? What about all of the national testing going on! The curriculum is changing toward the tests that measure Common Core. Did your legislature get rid of those? NO!

The Orwellian Value-Added Measurements (VAM) for teachers have been oppressive, and the ESEA Flexibility Waivers spell out this process. (See the "Charlotte Danielson Model," in the blogpost HERE) in finite terms to replace those teachers and principals that do not agree to the system. Interventions for individual students have been identified for remediation because of Common Core and now for College and Career Ready Standards in your waiver. Did Governor Fallin get rid of that? NO!

Your legislature supposedly came to your rescue, but when reading this legislation, they failed. Why? The entire federal agenda is contained in your ESEA Flexibility Waiver. Its not just about Common Core. Do you realize that the proposed ESEA re-authorization has redefined what a  family member is? Embedded in the Twenty-First Century Community Learning Centers (21st CCLC is found on page 6 of your ESEA Flexibility Waiver, under definitions in the proposed re-authorization of ESEA in U.S. SB 1094) we find that


"Family member’ means a parent, relative, or other adult who is responsible for the education, care, and well-being of a child."

Do you want to be in partnership with the government? NO? Who and where are your leaders? Have they not known about how Obama and Duncan, with a pen and a phone, created waivers to bypass federal law to implement this Total Quality Management (TQM) business system in our schools? The new name of the standards are College Career Citizenship Standards, not Common Core.

Unfortunately, whether it is Heritage Foundation, Eagle Forum, Pioneer, Americans for Prosperity, Glenn Beck, Hannity, or whomever else it may be, they are leading you astray when they only focus on two phrases, "Common Core" or "Choice" -- and perhaps on purpose! These organizations have an agenda, and it is not to protect your children or your children's privacy, nor to support the teachers. Some do not even know what is really happening. Others want to make money off alarming the grassroots. And you can bet your boots that many of you have contributed tons of money to these organizations that have led you down the wrong path.

So parents, DO YOUR OWN RESEARCH. You do not need an organization to tell you what to do. Scroll down to the "blued" links which contain all of the information you need to challenge the Oklahoma education bureaucracy's Common Core deception. When you have this documentation in hand, "storm the Bastille." Go to your legislature and demand changes.  Go to Governor Fallin and let her know that you know what this agenda is all about. Demand that she refuse the ESEA Flexibility Waiver and stop all these rotten standards -- no matter what their names -- be removed from your state.

Your waiver also allows your children's data to be given to third party contractors. Your legislature must provide protections that were gutted by the changes to the Federal Education Rights to Privacy Act (FERPA) allowing your students' private data to be used to create software, testing, and curriculum, another Obama action by fiat. (See this blogpost dealing with FERPA HERE.)

Be sure to request that your Attorney General review the constitutionality of charter schools that have no elected boards, because this is where most of the organizations that are "helping" you are taking even more money from public coffers. This is also the federal agenda to crush our public schools and continue to fund charter schools through so-called "choice." Federal "choice" is also an issue, but your waiver seemed to sidestep that controversial subject for now, stating it was difficult and impractical!

Documentation is attached below. Please ask yourself this question,"Why are President Obama,  Secretary of Education Arne Duncan, key Republican leaders, leading national conservative organizations such as Heritage Foundation and Eagle Forum, Lou Gerstner, (ex-CEO of IBM, who called for tearing down all 15,000 public school districts), Reed Hastings (CEO of Netflix, who calls for getting rid of elected boards), and the Council on Foreign Relations (CFR) all calling for tax-funded school choice?  Did you know THAT?  What's to like about THAT? And why did the Republicans pass federal choice for private and religious schools in U.S. HR 5 amendments? With the passage of the proposed re-authorization of ESEA agenda, all schools become government schools. We say NO! to this kind of tax-funded "CHOICE."  What the government funds the government controls.

ASK YOURSELF: ARE THE ABOVE-MENTIONED PEOPLE AND ORGANIZATIONS YOUR FRIENDS? DO YOU APPROVE OF SCHOOL CHOICE WITH ITS UNELECTED BOARDS (TAXATION WITHOUT REPRESENTATION)?

Please do your own homework and demand what is best for you, your children, and our representative republic. This is not a conservative or liberal battle. There are many true blue, hard-working Americans that want what is best for this country. We must be represented.

We are in the millions and we are going to fight for our children and our nation.

No. 4.... college- and career-ready as defined in the Federal Elementary and Secondary Education Act (ESEA) Flexibility document issued by the United States Department of Education and referenced in Option B of Principle 1: 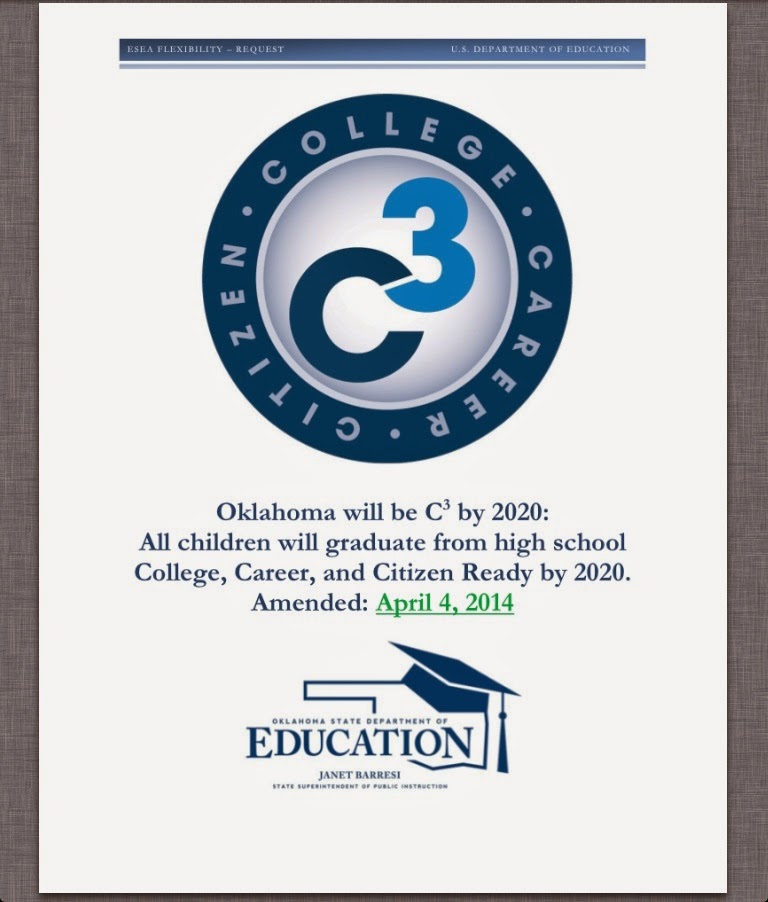 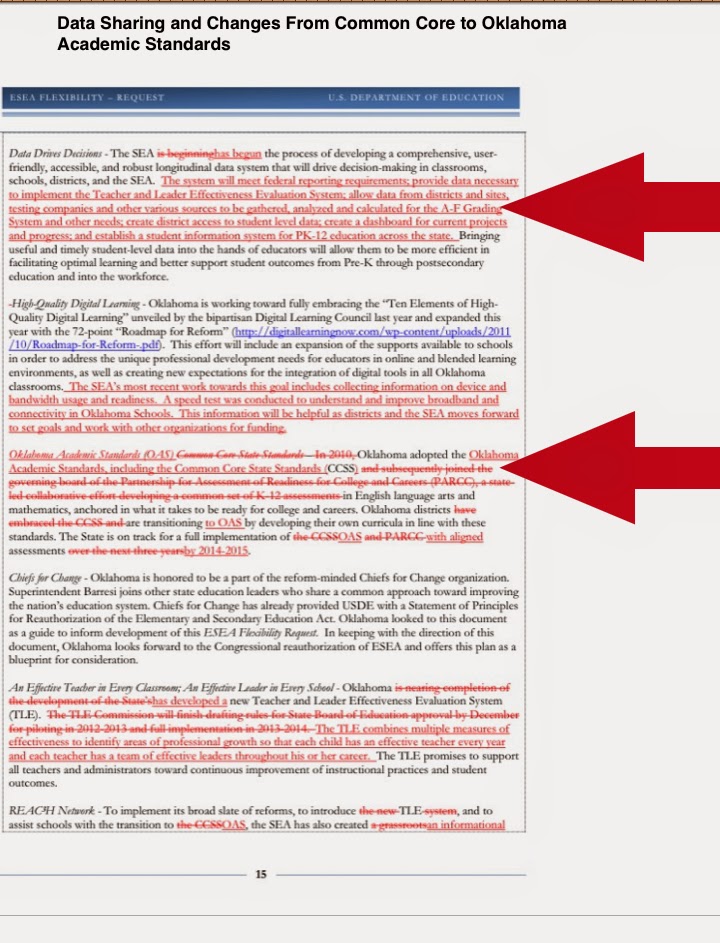 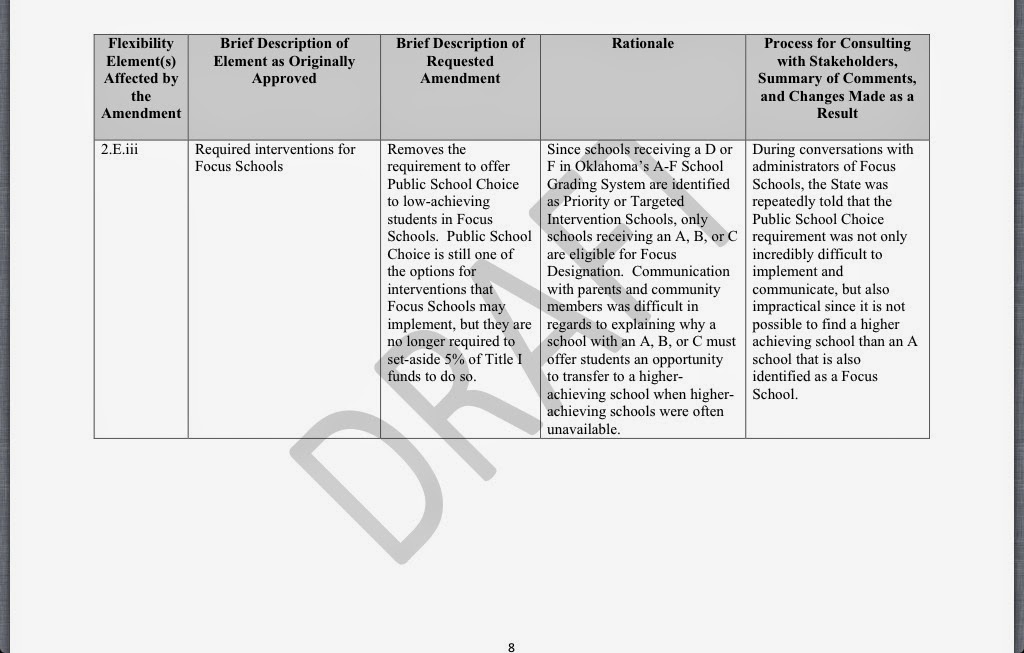 Posted by Charlotte Iserbyt at 11:03 AM