In November 1994, The Atlantic Monthly published an article titled "The Age of Social Transformation," by Peter Drucker. This article explains much about the ideology behind education reform, particularly the offensive concept of calling children "human capital" and assigning (by assessment) an economic value to them. 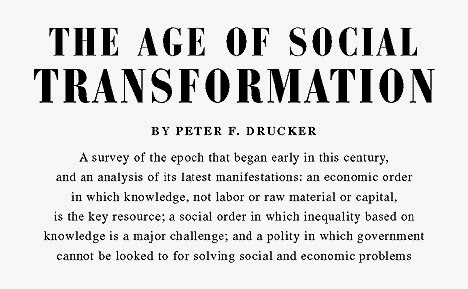 In this article Peter Drucker articulates his ideology about a person's "knowledge capital" as a portable asset, a property. This article explains the full context of social transformation we have all witnessed for the past 30 years. It explains how business and schools and the "private sector" (which includes churches and charities) must TRANSFORM to the new global order. Below are two separate excerpts:

THE SCHOOL AS SOCIETY'S CENTER...
KNOWLEDGE has become the key resource, for a nation's military strength as well as for its economic strength. And this knowledge can be acquired only through schooling. It is not tied to any country. It is portable. It can be created everywhere, fast and cheaply. Finally, it is by definition changing. Knowledge as the key resource is fundamentally different from the traditional key resources of the economist--land, labor, and even capital. [bold red added]

None of us researching education reform 25 years ago realized that Peter Drucker was one of its architects. Drucker was considered an economist and a business guru. But Drucker moved into the "private sector" of what he called "society" (by which he meant "State") in order to begin to implement performance standards for churches and charities. To accomplish this, he developed a philanthropic philosophy that maneuvered the donor into positions of demanding compliance for effective performance and meeting prescribed outcomes and goals. To read more about this, see our monograph "The Pied Pipers of Purpose."

By Sarah H. Leslie, 3D Research Group
Posted by Charlotte Iserbyt at 5:52 AM