"Our Public Schools - Control Them if You Can"

Ninety-four years ago, at least, the plans were laid.

Below is an excerpt from Our Public Schools - Control Them if You Can, by Solveig Eggerz, 1973.  The full copy is available at American Deception.com 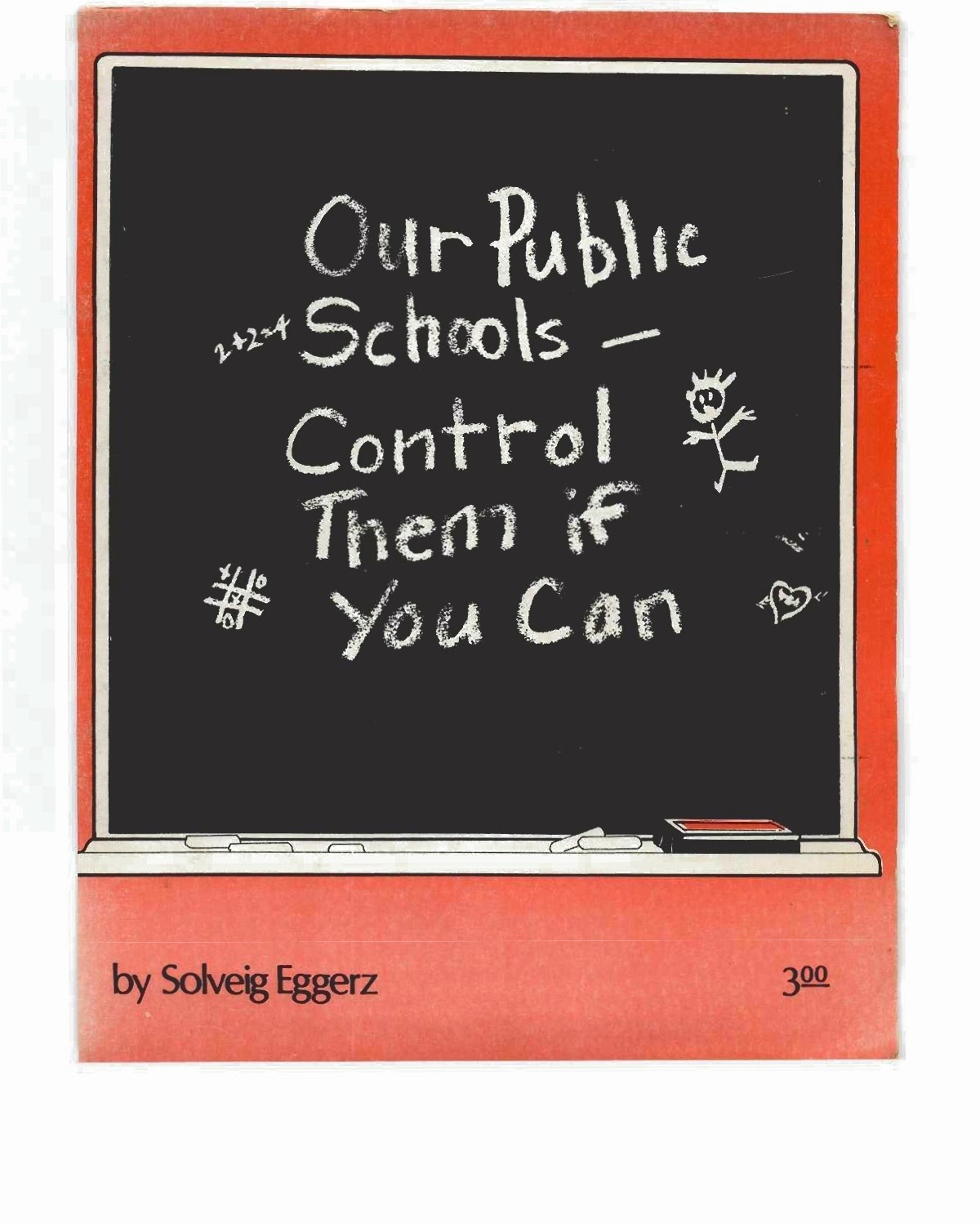 Page 9: Today's emphasis is on "preventive mental health," "innovation," and "educational change," all of which has led to a stepped-up involvement of the school in every aspect of the child's behavior, his innermost thoughts and beliefs. The journal of the National Education Association (NEA) outlines a technique for the "integration of attitudes," and compares its effectiveness to the methods used by the Communist Chinese, "to inculcate Communist attitudes into their youth ." (Five Issues in Human Relations Training, 1962).

are among the questions guidance counselors put to children in groups of twos or threes at "Talk Ins." These same sessions, sometimes called Self-Discovery, often employ techniques of group
criticism and confession, traditional components of brainwashing.

Page 12: A mother in Wheaton, Md., complained recently that her fourth-grader was asked in a social studies class the following questions:

As confirmation that the Trilateral Commission was part of the Power Elite's overall scheme. I told Jim to read Sen. Barry Goldwater's autobiography, WITH NO APOLOGIES, in which the former U.S. Senator explained: "In my view the Trilateral Commission represents a skillful, coordinated effort to seize control and consolidate the four centers of power---political, monetary, intellectual, and ecclesiastical. All this is to be done in the interest of creating a more peaceful, more productive world community. What the Trilateralists truly intend is the creation of a worldwide economic power superior to the political governments of the nation-states involved. They believe the abundant materialism they propose to create will overwhelm existing differences. As managers and creators of the system, they will rule the future."

I told Jim to note particularly that Sen. Goldwater had mentioned "ecclesiastical" power in addition to political, monetary and intellectual power. That is because the Power Elite (PE) want everything under their control, and that means there must be not only a world economy managed by a world government, but a one-world religion, too.

Skeptical as always. Jim asked if any religious leaders had forewarned of the plans of the PE, and I replied that as a matter of fact, even before H. G. Wells had written his OPEN CONSPIRACY and THE NEW WORLD ORDER books.  Pope Benedict XV on July 20, 1920 had warned: "The coming of a world state is longed for, by all the worst and most distorted elements. This state, based on the principles of absolute equality of men and a community of possessions, would banish all national loyalties. In it no acknowledgment would be made of the authority of a father over his children, or of God over human society. If these ideas are put into practice, there will inevitably follow a reign of unheard-of terror."

Jim shivered at this thought, and I asked him if he knew about Martin Scorsese's blasphemous film, "The Last Temptation of Christ." Jim said he had heard about it, so I told him it was based on the book by the same title by Nikos Kazantzakis, a famous philosophical syncretist who believed in synthesizing opposing ideas, trends and realities. I then informed Jim that in Marilyn Ferguson's THE AQUARIAN CONSPIRACY (1980). she said Kazantzakis in 1927 envisioned a union of individuals "who might create for earth a brain and heart, comrades he might signal 'with a password, like conspirators'."

I went on to tell Jim that John Dewey, the "Father of Progressive Education," had promoted a one-world religion in his book, A COMMON FAITH, published the year after his co-authored HUMANIST MANIFESTO (1933) and two years after he was made honorary president of the National Education Association (NEA) in 1932. Not many years after this, Dewey became the president of the League for Industrial Democracy, formerly titled the Intercollegiate Socialist Society.

Since "education" played a major part in the PE's plans, I pointed out to Jim that leading "progressive" educators in 1915 formed the Educational Trust to try to direct the future of American education. One of the members of the Trust was George Strayer, who in 1918 became president of the NEA, and one principal recalled "Strayer's Law" for dealing with disloyal subordinates was "Give 'em the ax." Leading officials of the NEA for decades supported "world government," using that specific term. And in the late 1940s, the NEA helped to found the National Training Laboratories (NTL), which in 1962 published ISSUES IN (HUMAN RELATIONS) TRAINING. The NEA has supported "human relations" or "sensitivity training" for years, and in this NTL publication one reads that human relations or sensitivity training "fits into a context of institutional influence procedures which includes coercive persuasion in the form of thought reform or brainwashing."...

Jim had a rather traditional education as a child, and it was difficult for him to believe that anybody associated with the NEA would try to change people's traditional values. I told him, however, that NEA president Catherine Barrett in the early 1970s admitted that by the year 2000, basic skills would be drastically reduced in education and, she said, "When this happens---and it's near---the teacher can rise to his true calling. More than a dispenser of information, the teacher will be a conveyor of values, a philosopher....We will be agents of change."

© 2014 Dennis Cuddy. Used with permission of the author.

Posted by Charlotte Iserbyt at 9:29 AM