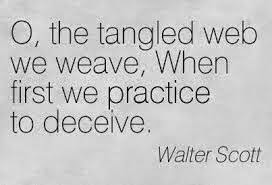 The point is that parents who take advantage of a tax credit or voucher or send their children to a publicly-funded Catholic school can expect to find that curriculum, assessment and computer technology and courseware are similar, if not identical, to the public school Common Core standards/curriculum.

There are some pretty bizarre statements in the following article by Brian Frage (6/12/14). Especially note the bolded text added to this excerpted material!


ALBANY, N.Y. — New York’s Catholic bishops, led by Cardinal Timothy Dolan, are calling on Gov. Andrew Cuomo to “keep his word” and enact an education investment tax credit bill that will help parents afford to send their children to Catholic and private schools.

Cuomo, a Democrat and son of former New York Gov. Mario Cuomo, previously said he supported the bill, which he called “a no-brainer.” Majorities in both chambers of the state legislature are also reportedly on board, but the measure was dropped when lawmakers passed the state budget on April 1.

The Education Investment Tax Credit would create a new state tax credit for individuals and corporations that donate money to public schools or to nonprofit scholarship organizations that assist middle and low-income families send their children to private and religious schools. Yearly donations would be capped up at around $300 million.

Of the proposed $300 million in tax credits, at least half would be set aside to increase donations to public schools and their teachers....

The state’s bishops said Cuomo, a product of Catholic schools, and other legislative leaders in Albany promised them that the tax credit would be enacted through the budget process. Frustrated with Albany’s notorious backroom politics, Cardinal Dolan, his fellow bishops and a coalition of activists and educators have launched a public campaign that features rallies, television commercials and print ads to lobby the governor and state legislators to pass the bill....

In a new 30-second TV spot, Cardinal Dolan, surrounded by children wearing Catholic school uniforms, said Cuomo assured the bishops that he would fight for “an innovative plan” to help students in Catholic and private independent schools.... 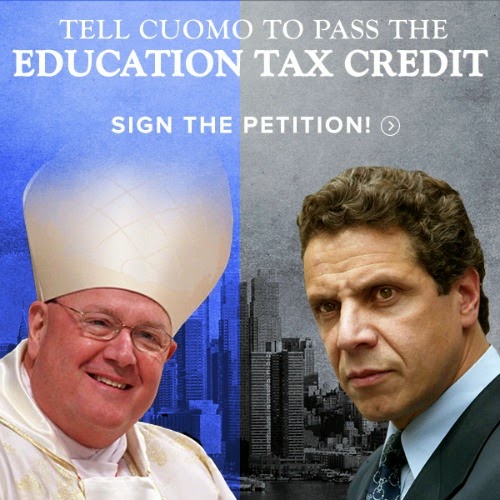 Another excerpt from the same article:


A recent report from the Friedman Foundation for Educational Choice makes the case that private-school choice programs, such as vouchers and scholarship tax credits, can stem the tide of private-school closures and prevent the emerging charter school sector from squeezing their Catholic and private counterparts out of the market.

According to the National Conference of State Legislatures, 27 states, including Washington D.C., provide some form of public assistance for parents eager to place their children in private schools.

The Friedman Foundation always misses the point regarding their pie-in-the sky choice proposals which have nothing to do with traditional choice, but are publicly-funded and therefore will be federally controlled. Friedman Foundation MUST know this. I'll give the Bishops a little more leeway; perhaps they don't know this? Are the Bishops aware of the following Marjorie Ledell quote:

Finally, raise the real issue and depend on democracy. Don’t let “to OBE or Not to OBE” or “to implement or not implement efforts to improve student learning” cloud the overdue national debate about whether public education should exist or be replaced with publicly funded private education. (Educational Leadership, Jan. 1994)


Ledell is, in effect, calling for a national curriculum for all schools accepting government funding. She is warning any American parent seeking a truly independent or religious education for his/her children to stay away from publicly-funded private education. What could be more clear than what Ledell, a major education change agent who worked with the infamous William Spady (of OBE fame and a high-up member of the NEA, ASCD, etc.) has told us? By the way, Spady was involved in training Catholic teachers in Skinnerian OBE and Effective Schools in Catholic Dioceses in the 1990s!

We should be very grateful to Ledell for putting in writing what the average American, including the Bishops, do not understand. School Choice originally came from the Left, and now is being promoted by the Right. This makes sense since the average American parent is more likely to accept poison which comes from the "right" rather than  poison coming from the "left."

May I ask a  rather politically-charged question?