...and, you can be sure, ALL nations, since that is the UNESCO plan! 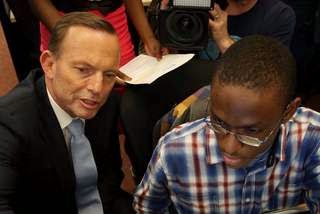 Visiting the P-TECH school in Brooklyn on his final day in New York, the Prime Minister praised the IBM-connected Pathways in Technology Early College high school, which offers a new model of education spanning grades 9 to 14 – that is with an extra two years bolted on in which the students gain a "associate in applied science" degree.

This subject was covered in my August 29, 2005 NewsWithViews article entitled "Preparing Children for Virtual World Classrooms," Part 2 of 2. Excerpts from my article follow:

Stimulus/Response, Rewarding & Punishing
The following quotes from overseas are included as proof that the "restructured" American education system is part of the international (lifelong) computerized work force training system. These quotes were taken from an important Australian research paper, published on the Internet in March of 2000. They document the fact that the computerization of the classroom is the model for the international system to which all the world's children and adults will be subjected...and brainwashed. (As you read them, please remember that the Bush Administration strongly supports the United Nations Educational, Scientific, and Cultural Organization’s (UNESCO’s) plans for world education (brainwashing and training). Mrs. Laura Bush and Secretary of Education Spellings addressed UNESCO’s Education for All Conference in February 2005. Secretary Spellings said: “The No Child Left Behind Act and UNESCO’s Education for All Campaign complement each other…”)

Computers and the World Wide Web as Skinner’s Teaching Machine


"Probably the most influential theorists in the development of web-based teaching are the behaviourists, especially B. F. Skinner, Robert Gagne and Benjamin Bloom and his associates. Over a long lifetime and through half a century of experimentation and writing, Skinner developed behaviourist theories into a conceptual structure for teaching machines. Skinner's theory of operant conditioning - that anyone could be taught as long as instruction is broken down into short sequenced steps and appropriately reinforced - Gagne's task analysis, and the later work by Bloom and his associates on taxonomies of educational objectives, provided conceptual frameworks for developing positively-reinforced computer-based education (programmes such as typing tutors provide good examples), frame-sequenced, web-based information presentation (Andy White, 1996) and broad principles of self-paced learning (Penn State University). Gagne's task analysis (Penn State University) developed concepts of hierarchies of learning tasks which Bloom and his associates elaborated into the well-known Taxonomies of Educational Objectives.

"Unlike Romantic theory which was derived from theory of learning through sensory perception (Berkeley) and discovery (Rousseau), behaviorist theory is based on scientific investigation and measurement. Early theory in behavioural psychology has been reinforced and modified by discoveries in cognitive psychology, especially discoveries related to the understanding of cognition needed to develop Artificial Intelligence. Developments in cyber technology, therefore, are likely to reinforce the scientific approach to computer-and Internet-based education. It is worth noting that web-based resources for computer-based Distance Education (e.g. Penn State University) and Instructional Design are primarily behaviourist.

"Perusal of national qualifications frameworks, standards-based vocational (e.g. U.S. Department of Labor, NCRVE) and school curricula (e.g. Putnam Valley Schools, UK DFEE), and national qualifications frameworks (AOAB, DFEE) indicates the influence of behaviourist theory on current education and training curricula. Statements of standards and benchmarks such as the UK national curriculum in science, a combination of science and life skills standards and benchmarks from the USA and the West Australian Year 11 Chemistry Syllabus) (SEA) show not only remarkable similarity, but a consistency of structure reflecting general behaviourist principles and more specific cognitive and other objectives from Bloom et al's taxonomies.


"The U.S. Compendium of Standards and Benchmarks, highlights another trend reinforcing the use of behaviourist structures in educational/curricular frameworks and syllabi - the extent to which a behaviourist approach can be manipulated to match economic rationalist demands for demonstrably quality teaching and learning outcomes. Behavioural emphases on general objectives stated in terms of learning and performance outcomes, and of short sequenced steps can readily be identified as general and specific benchmarks and specifications demanded by industry; as student performance on internationally standardised testing can be used to demonstrate continuous improvement. Behaviourist educational structures, therefore, being compatible with current management procedures and quality systems, are likely to remain international systems in states where economic rationalism is a dominant ideology of government.

CONTINUE READING: http://www.newswithviews.com/iserbyt/iserbyt30.htm
Posted by Charlotte Iserbyt at 5:51 AM