This is an excellent article by a former public school teacher. She knows what she is talking about. Click on the article link to read:

Parent: Why I can’t ‘in good conscience’ leave my kids in public school


Lynne Rigby and her husband Brad live outside of Orlando, Florida, with their five children who have attended a Seminole County public elementary school. Rigby, a former public school teacher and photographer, wrote a letter to state and local officials explaining why, with great sadness, she and her husband are pulling their children out of public schools. No longer, she says, can she accept the effect that high-stakes standardized testing and other school reform measures are having on her children. She posted the letter on her blog so that her friends could see it, and she has gotten a much bigger response than she expected.


However, with a few minor exceptions (advent of computers, etc.) it could have been written anytime over the past 20-30 years.

Has anyone  noticed the sudden very recent addition of  anti-Common Core articles by public school teachers (present and former) articles being used by those wishing to implement publicly-funded private education with no elected school boards?

Perhaps I am paranoid, but I believe something is rotten in Denmark.

Is it deliberately going into the teaching profession and elsewhere to keep its deception alive at the same time it dismantles public education (one school system by one; i.e. recent New Orleans closures) and  installs a tax-funded charter school system without elected school boards, as recommended by Lou Gerstner, ex-CEO, IBM, in The Wall Street Journal:


I believe the problem lies with the structure and corporate governance of our public schools. We have over 15,000 school districts in America; each of them, in its own way, is involved in standards, curriculum, teacher selection, classroom rules and so on. This unbelievably unwieldy structure is incapable of executing a program of fundamental change. While we have islands of excellence as a result of great reform programs, we continually fail to scale up systemic change. - Abolish all local school districts, save 70 (50 states; 20 largest cities). Some states may choose to leave some of the rest as community service organizations, but they would have no direct involvement in the critical task of establishing standards, selecting teachers, and developing curricula.[bold added] Lessons From 40 Years of Education 'Reform'

It is fun to relate this to the clever maneouvering of the Wolf (Gerstner?) in Little Red Riding Hood, who devoured grandma (public education with elected boards) and then the little girl (private/religious education). 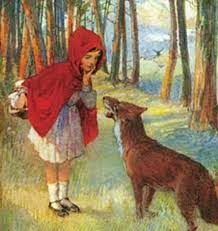 "Who's there?" cried Grandma from her bed.

"It's me, Little Red Riding Hood. I've brought you some cakes because you're ill," replied the wolf, trying hard to hide his gruff voice.

"Lift the latch and come in," said Grandma, unaware of anything amiss, till a horrible shadow appeared on the wall. Poor Grandma! For in one bound, the wolf leapt across the room and, in a single mouthful, swallowed the old lady. Soon after, Little Red Riding Hood tapped on the door.

"Grandma, can I come in?" she called.

Now, the wolf had put on the old lady's shawl and cap and slipped into the bed. Trying to imitate Grandma's quavering little voice, he replied: "Open the latch and come in!

"What a deep voice you have," said the little girl in surprise.

"The better to greet you with," said the wolf.

"Goodness, what big eyes you have."

The better to see you with."

"And what big hands you have!" exclaimed Little Red Riding Hood, stepping over to the bed.

"The better to hug you with," said the wolf.

"What a big mouth you have," the little girl murmured in a weak voice.

"The better to eat you with!" growled the wolf, and jumping out of bed, he swallowed her up too. Then, with a fat full tummy, he fell fast asleep.
Posted by Charlotte Iserbyt at 8:17 AM