The following story gives new meaning to the phrase
"getting caught with your hands in the cookie jar." 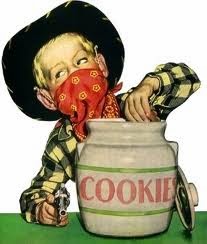 
From the Express & Star, the following article about biometric scanning on school children in Stourbridge, England:

The headmaster of this school explains, “We will also be able to monitor what children are buying to make sure they are eating a healthy diet.”

The diet police must be out in full force in schools these days.

I first encountered the thumbprint biometric system being used nearly a decade ago when I took a grandson to the orthodontist to have his teeth braces adjusted. We entered the office to check in and the receptionist explained a new system the orthodontist had installed, and told my grandson to place his thumb on a pad to record the print which would then bring up a photo of  him on a screen as further ID. It was to be the procedure from then on to let them know he had arrived for the scheduled appointment, before proceeding to the waiting room to be called. I didn't let my grandson have the thumbprint recorded, and told the receptionist I didn't think his parents would give permission to do that. The receptionist began the litany assuring that the information would be only for in house use, yada, yada, yada.

When I pursued it further, she retrieved a paper explanation  and more assurances of identity protection.... evidence that they expected at least some resistance. The paper explained that since many parents drop off their children for the routine adjustment of braces and pick them up after the procedure, it was a way for the orthodontist to assure proper ID of any unaccompanied or accompanied juvenile patient.

Needless to say I was appalled. 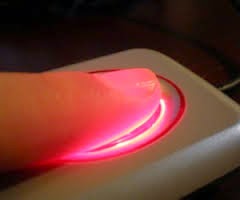 We proceeded to go to the waiting room where I observed reactions to the new system as others arrived.  Most of the kids had an adult with them, but  NOT ONE EVEN QUESTIONED THE SYSTEM, but simply complied.

A couple reactions were the accompanying adult saying, "OH COOL!"

It would not surprise me if the reaction were much the same with the school's "diet fingerprints," until the "diet assessment" results in demands to change the eating habits.

Posted by Charlotte Iserbyt at 2:13 PM