Is Dr. Stotsky Coming out of the Skinner Box?

Questions that must be asked....

We appeal to Dr. Sandra Stotsky to clarify her position on the following matters. Often scholars are USED by those promoting political agendas. And in the case of opposition of Common Core, the "cure" is much worse than the disease!

First read this article "BOARD TO LAUNCH REWRITE OF READING STANDARDS," by William Lutz,Special to DallasBlog.com, June 27, 2006:


The State Board of Education is about to conduct a major rewrite of the Texas Essential Knowledge and Skills (TEKS) for English, Language Arts, and Reading....

When the TEKS got adopted, it was agreed that the board would revisit the curriculum in each subject area before issuing a call for new textbooks in that subject....

...[A] board member Don McLeroy (R-Bryan) requested a workshop to discuss the issue in more detail. Afterwards, board members agreed the TEKS needed major changes.

The workshop featured presentations from three national experts on the science of reading: Reid Lyon, Barbara Foorman, and Sandra Stotsky....

Stotsky emphasized the importance of clear and measurable standards....

"If you focus on the objectives that are measurable, you’ll quickly see how many you can discard," Foorman suggested.

"You discard the repetitions, and you discard the ones that aren’t measurable, and you’ll probably reduce this document in half," she added.

Miller predicted the board will rewrite the curriculum to make it shorter, clearer, and measurable. "The standards have to be so that they are measurable..."

...Cargill said, "...the best celebration of all will be the day that our teachers actually have the new and improved TEKS in their hands and can start using clear, concise, measurable, non-repetitive standards with their students." [emphases added]


The words highlighted above are "buzz words" associated with the form of teaching phonics that is based on Skinnerian operant conditioning methods (Mastery Learning, Direct Instruction, etc.), a topic frequently and recently discussed on this blog.  "Measurement" is defined as a critical component of Skinnerian operant conditioning. "Measurable objectives" means that only the prepared script will be taught and tested; in other words, "teach to the test."[1]

Those involved in fighting Communist Core should ask questions about where Sandra Stotsky is coming from, especially if she is going to be the poster child of the neoconservatives in Texas opposing Common Core.

The powers-that-be need Skinnerian Direct Instruction for tax-funded school choice/charters which will be used for school-to-work training. What is Direct Instruction? This is a major theme of my book the deliberate dumbing down of america. Below is an explanation:

STEPHEN BROADY OF TARKIO, MISSOURI PRESENTED TESTIMONY IN 1984 AT THE U.S. Department of Education’s Region VII hearing on “Notice of Proposed Rulemaking to further implement Section 439 of the General Education Provisions Act, 34 CFR, Parts 75, 76, and 98, 20 U.S.C.A. Section 2132(h) 20 U.S.C. 1231e–3(a)(1), 1232h (Hatch Amendment).” Broady’s statement exposes the controversial nature of the two leading mastery learning programs —Exemplary Center for Reading Instruction (ECRI) and Project INSTRUCT—both of which use Skinnerian operant conditioning and both of which submitted claims of effectiveness which have been questioned by persons involved in implementing and evaluating the programs. The third program, DISTAR (Direct Instruction for Systematic Teaching and Remediation), which is similar to ECRI, is the highly recommended “scientific, research-based” phonics program so popular with conservatives in the late 1990s. The following are some excerpts from Stephen Broady’s testimony:

...These mastery learning systems use a type of psychological manipulation based on the Skinnerian ideology of rewards and punishments, and individual feelings are irrelevant.... More commonly referred to as “behavior modification,” the Skinnerian ideology which is used in the teaching techniques of these mastery learning systems, breaks down the process of learning into small bits of information and actually codes a type of behavior that is desired into the learning process itself.

The real objective of these mastery learning systems with their behavior modification, is a deliberate attempt to make children conform to an artificial environment which is more suited to the thinking of the school than to the needs of the children.

These federally funded mastery learning systems require the use on young children of a highly structured curriculum, test and re-test with the use of criterion tests, stopwatches, direct eye contact, physical contact, and psychological manipulation until the so-called “mastery” of the subject is achieved. These ideas and practices form a complex philosophy in which the “authoritarian” concept predominates.

In the early part of 1983, I obtained the evaluation report of Project INSTRUCT from the superintendent’s office of the Lincoln Public Schools....

The evaluation results clearly referred to behavioral objectives which were… established for: (a) students; (b) parents; (c) administrators; (d) media specialists; (e) project staff; (f) teachers; (g) paraprofessionals and volunteers, and (h) prospective teachers. The wholesale use of behavior modification is part of Skinnerian psychology. As it was outlined in the evaluation, Project INSTRUCT includes rewards and punishments, not only for school children, but for anyone who comes in contact with the school system itself. 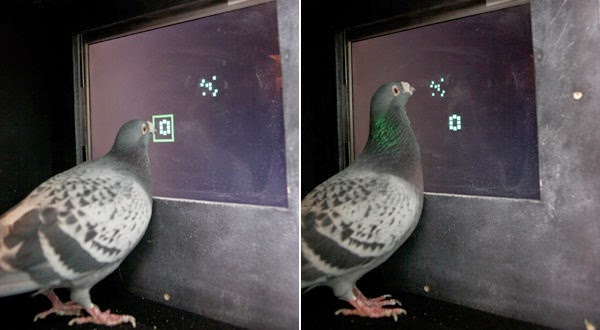 
"Project INSTRUCT grew from beliefs that to reduce reading failure reading programs must (1) be diagnostic and prescriptive so that failure does not begin to occur, (2) be implemented by regular teachers in regular classrooms, (3) provide direct rather than indirect teaching, (4) correlate instruction in all language skills, particularly reading, spelling and handwriting.…"

The intent and emphasis... was on behavioral indices and concrete ways of showing accountability; and the data would suggest that the reading of the students themselves may not have increased.... (pages 203-204)[2]

See also pages 210-213 of my book, which is downloadable free, and read about the National Council for Educational Research (NCER), Professor Robert Glaser, and 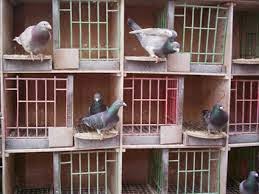 Siegfried Engelmann’s DISTAR (Reading Mastery) and ECRI are both based on the very sick philosophical world view that considers man nothing but an animal—an “organism” (in Skinner’s words)—responsive to the manipulation of stimulus-response-stimulus immediate reinforcement or rewards to bring about predetermined, predictable behaviors. Skinner’s quote about making a “pigeon a high achiever by reinforcing it on a proper schedule” is repeated often in this book to impress on the reader the horrifying aspect of animal training masquerading as education in these programs. 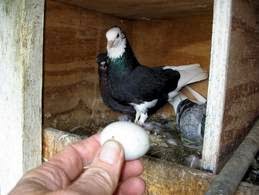 For those who are still not persuaded, see Appendix XXV in my book, where much more extensive documentation on the usage of Skinnerian operant conditioning in the schools can be found. Here are a few choice nuggets, one of which is relevant to the state of Texas, which has long used Direct Instruction (Skinnerian):

Of course, for those who don’t have any problem with this type of education/training, STOP: you need read no further. For those who may have questions, please bear with me. First, you will want to be sure I am correct in my claim that this is, in fact, Skinnerian dog training. Following are some excerpts related to two of the nine programs discussed in the book What Works in Education, which is "the result of a collaborative effort between two organizations: The Cambridge Center for Behavioral Studies and Division 33 of the American Psychological Association...." Gratitude is extended to "Doug Carnine, Professor of Education at the University of Oregon, and Bonnie Grossen, Editor of Effective School Practices, for consulting on this project."

Here is Grossen's reply to an American education researcher who called her in the mid-nineties to ask if Iserbyt's contention that  Direct Instruction was based on B.F. Skinner's philosophy was correct: "Yes, "Iserbyt is correct. Direct Instruction is based on the psychological theories and methodology of B.F. Skinner" The chapter of What Works in Education entitled “Mabel B. Wesley Elementary” states:


The Mabel B. Wesley Elementary School in Houston, Texas, has had a schoolwide Direct Instruction language arts curriculum since 1976, and has implemented other direct instruction programs and other programs based on related approaches in other subject matters.... Dr. Thaddeus S. Lott, Sr. is the Project Manager for the Northwest Charter District and Mrs. Wilma Rimes is the principal of Mabel B. Wesley Elementary School.

In 1975... in searching for a means of improving reading skills, Dr. Lott, then the new principal, visited a campus that was implementing the DISTAR reading curriculum (see Direct Instruction for Teaching Reading and Remediation, Carnine and Silbert, 1979), developed by Engelmann (reported in Becker, Engelmann and Thomas, 1975A and 1975B). He was impressed by what he observed and began the implementation of DISTAR [now called Reading Mastery, ed.] in 1976. (page A-152) 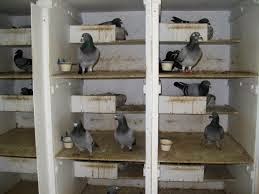 Edward Curran, the former Director of the National Institute of Education, was fired by Secretary T.H. Bell in 1982 due to Curran’s recommendation to President Reagan that the National Institute of Education—the research and development arm of the U.S. Department of Education—be abolished.... Abolishing NIE could have removed much of the controversial federal government influence in our local schools. In an article entitled “Success Eludes Old Research Agency,” Education Week (December 9, 1982) quoted Dr. Curran as follows: "NIE is based on the premise that education is a science whose progress depends on systematic 'research and development.' As a professional educator, I know that this premise is false."[3]

In conclusion, here is an example of the subtle use of terminology. This comes from a Texas report recommending Direct Instruction (Skinnerian), also referred to as "direct, teacher-centered instruction." Dr. Stotsky's name can be found throughout this report, and she is credited under "Acknowledgement" for her "valuable input and assistance" on this project. The question remains -- is she advocating Skinnerian Direct Instruction? See HERE

Finally, it should be always kept in mind that Skinner experimented with his animal methods of behavior modification on his own infant child: 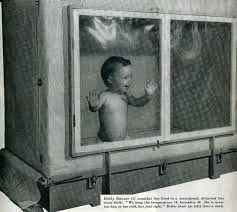 Endnotes:
1. See page G-27 of my book where these glossary terms are defined.
2. All bold emphases added in quotations excerpted from my book.
3. From my book, page 191.

Posted by Charlotte Iserbyt at 10:16 AM