Will FINN Never Be FINNished?

The "Dramatic Shrinkage" of Private Education


"Private education as we have known it is on its way out,
at both the K-12 and postsecondary levels.
At the very least, it's headed for dramatic shrinkage,
save for a handful of places and circumstances,
to be replaced by a very different set of institutional, governance,
financing, and education-delivery mechanisms."
Chester Finn (Source)


A Report by Anita Hoge of the 3D Research Group

For those who don't know who Chester ("Checkers") Finn is, we suggest they buy his book We Must Take Charge, 1991, available at Amazon.com. Parents, especially, will be shocked at his disregard for traditional parents' rights to be in charge of their children's behavior. Excerpt from We Must Take Charge--Our Schools and the Future, page 280-281:


In earlier chapters, we examined accountability in the realm of public services. I suggest that we also need to devise systems of private accountability.[emphasis added]

"Parents," Karl Zinsmeister writes, "are responsible for their children. They need to be held responsible." [emphasis in original]

Here, as in our public institutions, such systems must incorporate consequences, both the warm, fuzzy kinds and the kinds one would as soon avoid.   Without accountability there is no real pressure for change, and without that pressure being felt by parents there is not likely to be much change in the behavior of their offspring. We ought therefore be ready to impose palpable consequences on adults when they or their children deviate from reasonable behavioral norms. There are not many institutions in which a child is well served by clapping his parent into jail. But the principle of 'parent liability' must include the willingness of the larger society to inconvenience people in ways they do not welcome.... [emphases added] 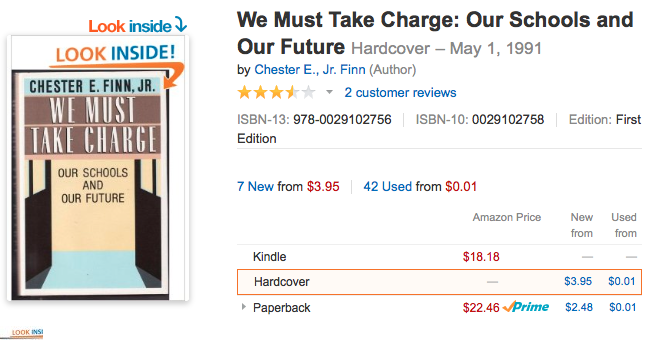 "Chester Finn  gives us a war plan for the educational battles of the nineties. The issues he discusses--and the common sense answers he proposes--will set the terms of the debate for years to come."

(1) Wow. This is 2001. They always favored Title I following the child. They call it "portable Title I." The flex waivers allow any state to use Title I like it wishes. This overview is exactly what was planned. Note his co-authors in the following article: "Memorandum to the President" - Education Week, by Chester E. Finn, Bruno V. Manno, and Diane Ravitch, January 24, 2001:


Demanding accountability. These funds by this grant may be used to create and maintain rigorous state academic standards, effective assessments, and workable accountability systems—and to combat the anti-standards backlash....

The centerpiece Title I program needs a total overhaul. Our six recommendations are...

Consistent with the theory of charter schools, Uncle Sam would give states maximum flexibility in return for improved results. [We call this "waivers for favors," ed.] This is no block grant; it's much more like a contract, one that changes Washington's role from regulator to education investor, helping states and districts reach a common national goal: boosting academic achievement....

America's education system is evolving. Promising reforms are under way, with the states especially active change agents, joined by a number of local districts. The nation has reason to be cautiously optimistic that its schools are starting their long—and overdue— journey to the dual destinations of equal opportunity and high performance. [emphasis added]


Governance. The basic structural and governance arrangements of American public education are obsolete. We have too many layers, too many veto points, too much institutional inertia. Local control needs to be reinvented—to me, it should look more like a charter school governed by parents and community leaders than a vast Houston- or Chicago-style citywide agency—and education needs to join the mayors' (and governors') portfolios of other important human services. Alternatives are emerging—mayoral control in a dozen cities, "recovery" school districts in a few states, and more—but the vast majority of U.S. schools remain locked in structures that may have made sense around 1900, but not in 2014.

Finance. I dare you to track, count, and compare the dollars flowing into a given school or a given child's education. I defy you to compare school budgets across districts or states. I challenge you to equalize and rationalize the financing of a district or state education system—and the accounting system that tracks it—in ways that target resources on places and people that need them and that enable those resources—all those resources—to follow kids to the schools they actually attend. What an unfiltered mess!


EdisonLearning Inc., formerly known as Edison Schools Inc., is a for-profit education management organization for public schools in the United States and the United Kingdom. It was founded in 1992 as The Edison Project, largely the brainchild of Chris Whittle. The initial expansion of Edison included the involvement of Tom Ingram (campaign manager and chief of staff to former Tennessee governor and United States Secretary of Education from 1991-1993, Lamar Alexander), Benno C. Schmidt, Jr., John Chubb (political scientist from the Hoover and Brookings Institute), and Chester E. Finn, Jr. (assistant secretary of education to former presidents Reagan and George H.W. Bush). Originally founded around the idea of school vouchers, Edison primarily contracts with school districts on the basis of performance partnerships, alliances, and charter school establishment. [Source, links removed, emphases added]

(4) Chester Finn's article, "Why Private Schools Are Dying Out: A few elite institutions at both the grade-school and college levels are doing better than ever. But their health conceals the collapse of private-sector options in the U.S.," published in The Atlantic Monthly, May 16, 2013. Here are some of the "dramatic" excerpts:


Private education as we have known it is on its way out, at both the K-12 and postsecondary levels. At the very least, it's headed for dramatic shrinkage, save for a handful of places and circumstances, to be replaced by a very different set of institutional, governance, financing, and education-delivery mechanisms.

Consider today's realities. Private K-12 enrollments are shrinking -- by almost 13 percent from 2000 to 2010. Catholic schools are closing right and left.... In addition, many independent schools... are having trouble filling their seats....

Meanwhile, charter school enrollments are booming across the land. The charter share of the primary-secondary population is five percent nationally and north of twenty percent in 25 major cities....

What's really happening here are big structural changes across the industry as the traditional model of private education -- at both levels -- becomes unaffordable, unnecessary, or both, and as more viable options for students and families present themselves....

Changing the delivery system might serve to make private education both more affordable and more different, and signs of such change are already evident, but rarely in the traditional nonprofit portions of the private sector. Instead, the boldest innovations are coming from entrepreneurs, most of them profit-seeking and most of them delivering instruction (and more) via technology rather than face-to-face in brick buildings that are open just six or eight hours a day for 180 or so days a year. [all emphases added]

Bear in mind that Finn is a very controversial man. He has critics on the Left, on the Right, and everywhere in between. For example:
Do you want this man representing YOU, the parent of America's children,? Does he have the best interests of you and your child at heart?

Posted by Charlotte Iserbyt at 5:59 PM