WE ARE AT WAR!


“What is absolutely essential is that
the full facts be given to all our people,
for mind warfare is total war.”
Edward Hunter, Brainwashing: The Men Who Defied It, 1953

“MIND WARFARE” includes the Skinnerian brainwashing called for by leading Neo-Conservative organizations, including the Heartland Institute.

This is a war to destroy our constitutional rights, including our right to vote, and the destruction of our children’s minds, souls and consciences. After 12 years of Neo-Conservative supported Skinnerian animal training computer instruction, your children will no longer have a conscience, nor will they be able to take an unpopular stand, for fear of being punished. They will act only to get a reward or praise.

Did hundreds of thousands of American servicemen and women give their lives in foreign wars to end up with our free constitutional republic being turned over to the globalist communists (the communist/ socialist/ corporate/ fascist/ libertarian Neo-Conservative wolves in sheep's clothing) ? Without firing a shot? On a silver platter?


It is time to stop the 100% Neo-Conservative boycott of the truth regarding their communist agenda! Don't forget that Wall Street funded the Bolshevik Revolution. Don’t forget the NeoConservative Heritage Foundation drafted the North American Free Trade Agreement (NAFTA) which has robbed Americans of hundreds of thousands of good jobs. Don't forget Karl Marx, who drafted the Communist Manifesto, was a strong supporter of Free Trade! And, lastly, don't forget that Mind Warfare, referred to by Edward Hunter (above) is what the neoconservative Heartland Institute recently recommended for use on our children in America's "new" schools/training laboratories!

The National Alliance of Business, in its newsletter Work/America... The Business Force on Workforce Development, Vol. 15 Issue 5, May 1998  carried the following article entitled "Knowledge Supply Chain: Managing K-Age 80 Learning." Repeat Kindergarten through Age 80?! Workforce Training. Yes, Grandpa... that means YOU! And YOU, too, Grandma! This is what is called "Limited Learning for Lifelong Labor." Using the Skinnerian Operant Conditioning method called for by Heartland Institute.

The following quotations from Edward Hunter, the man who coined the term “brainwashing” and author of Brainwashing: The Men Who Defied It, speak to what we as Americans can still do to reverse the process. When Hunter speaks of brainwashing he is referring primarily to the Skinnerian/Pavloviananimal training method supported by the neoconservative movement:

"Surely there can no longer be a trace of doubt that brainwashing is sheer evil. The fight against it is the culminating issue of all time, in which every human being is protagonist. There can be neither escape nor neutrality where such responsibilities lie. There can be neither front nor rear, for the great lesson that came from the brainwashing chambers was that while every man has a cracking point, every man’s cracking point can be immensely strengthened. That is the job of home, school, and church. The mother, teacher, and pastor are in the front lines in this ideological conflict, and every word they say to their sons and daughters is important to the struggle, for character more than anything else will determine the outcome.

"Truth is the most important serum and integrity the most devastating weapon that can be used against the totalitarian concept.... Nothing should be allowed to interfere with the task of getting those facts across to the people who need and can use them." (Read the entire Hunter quotation on page 450 of my book)

Read on below for a perfect example of what Hunter is talking about, how the brainwashing is being carried out in the United States. In this case, it is a "choice" advertising campaign. This is a huge media blitz calling for tax-funded school choice (federally-controlled private education run by unelected boards). Hunter refers to this as "mind warfare is total war." The “controlled” media is in a special position to conduct “mind warfare.” For example, see the following Philly School Choice media campaign to promote "choice" to the public.

It was announced today that Choice Media has launched PhillySchoolChoice.com, a major media campaign involving a website, Facebook page, television commercials, YouTube videos, Twitter & Facebook ads, traditional newspaper ads and earned media coverage.  The campaign will include eight separate 30-second television commercials that will air on the early and late evening news programs of all four broadcast local news stations (ABC, CBS, FOX and NBC affiliates), for five days/week, four weeks in a row. Two new television ads will be released each week during the four-week run. The commercials feature only Philadelphia parents talking about their experiences -- no politicians or union officials will appear.

Below you will find the first two spots produced by Choice Media. They feature Philadelphia area parents sharing stories about the positive impact that school choice has had on their lives and the lives of their children. These personal accounts are illuminating and heart warming. They manage to capture in thirty seconds exactly what is at stake in the great debate over expanding choice; ensuring every child in America has access to a top-notch education. (Source)


Recently the Skinnerian/Pavlovian Cat jumped out of the 34-year denial bag. As was mentioned earlier on the blog, the book Rewards has just been published. Subtitled "How to use [SKINNERIAN/PAVLOVIAN, ed.] rewards to help children learn - and why teachers don't use them well." Paperback – October 1, 2014. The President of the Heartland Institute, Joseph Bast, who has written a book Rewards, with long-time educator Herbert Walberg, calling for the Skinnerian/Pavlovian method to train our children, like pigeons, dogs, etc., for the workforce rather than to teach them academics. See the blog post HERE and especially HERE. 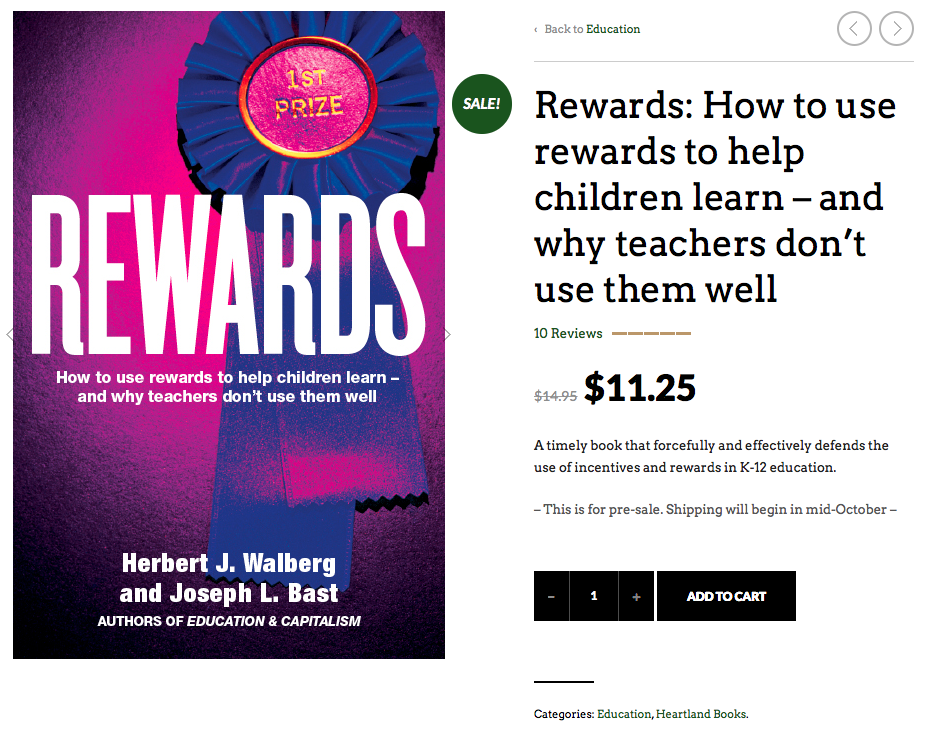 The deliberate dumbing down has now become the excuse for complete social change, including the privatization of education (the handing over to the unelected multinational corporations the responsibility for education—actually training—of future citizens). Such a transfer of responsibility will be facilitated by the creation of charter/magnet schools and passage of legislation providing tuition tax credits/vouchers. The workforce development system will, of course, be international, as is indicated by many quotes in this book. Parents who may be enthusiastic about the various choice proposals may change their minds regarding “choice” when their child becomes part of the corporate fascist quota system, being tracked into a career chosen for him/her by unelected corporate managers who set labor force requirements. Such quotas will be a part of the global planned economy. Parents will have no say regarding their child’s placement since there will no longer be an elected body, such as a school board, to whom they can complain.

Only a dumbed-down, brainwashed, conditioned citizenry could willingly accept what is being offered Americans under the guise of “remaining competitive in an increasingly global economy,” and relinquishing our sovereignty in the name of “global understanding and peace.” (excerpted from page 450-51 of my book)

Good Americans  are being lied to. What is going in now, supported by the highly-funded Neo-Conservative Trotskyites, and its controlled media, is described in my book the deliberatedumbing down of america, a free download at http://www.deliberatedumbingdown.com or available at amazon.com. Get informed! It isn't too late!

Posted by Charlotte Iserbyt at 4:58 PM