I got a huge kick out of this one!

When serving as Senior Policy Advisor,Office of Educational Research and Improvement,  U.S. Dept. of Education, in 1981, I wrote a paper which was submitted to President Reagan's Secretary of Education T. H. Bell, which had the same title "The Road to a National Curriculum." Everything, absolutely everything, was put in place in 1981.

As the French say, plus ça change, plus c'est la même chose -- "the more things change, the more they stay the same." 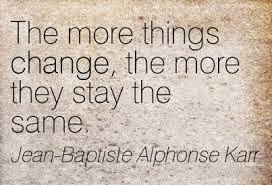