or "Back to the Reservation"...

Here is how the onerous education reform plan is being implemented in a Passamaquoddy Tribe Indian school in Maine. It will just break your heart to read this Womb-to-Tomb intrusive agenda:

PLEASANT POINT, Maine — President Barack Obama’s administration dispatched a pair of Cabinet secretaries to the easternmost region of the U.S. on Monday to get a firsthand look at a Passamaquoddy Tribe school that has been targeted for replacement.

Jewell and Duncan convened a study group in 2013 to examine challenges facing Bureau of Indian Education-funded schools and to propose reforms. The study group issued its proposals in June, and Jewell issued a secretarial order the same month to redesign the bureau over a two-year period.

The bureau’s aim will go from being a provider of education to an organization to help tribes operate schools. The first phase will be the establishment of a school operations division that will focus on recruiting top teachers and principals, acquisition and grants, school facilities and educational technology. An office of sovereignty and Indian education will be created to help tribes operate schools and shape what their children learn about their Native American culture and language.

The second phase will focus on improving performance of individual schools through support teams and a cradle-to-the-classroom approach of providing such services as prenatal care, early literacy, children’s health care and counseling. [all emphasis added]

To understand the full scope of the significance of this for all of us, please watch the following video, "Russell Means: Welcome To The Reservation":


"The American people for too long have been an irresponsible free people and even generation to generation has become less free. They don't recognize it. They ave lost the ability for critical thought. In order to regain critical thought all you have to do is read the Constitution and then look at the laws that govern you especially from the federal perspective. It is unconscionable to allow your freedoms to be taken away decade after decade after decade, year after year...."


Here is a description of this Russell Means video:


The United States is one big reservation, and we are all in it. So says Russell Means, legendary actor, political activist and leader for the American Indian Movement. Means led the 1972 seizure of the Bureau of Indian Affairs headquarters in Washington, D.C., and in 1973 led a standoff at Wounded Knee, South Dakota, on the Pine Ridge Indian Reservation, a response to the massacre of at least 150 Lakotah men, women, and children by the U.S. Seventh Cavalry at a camp near Wounded Knee Creek.

American Indian Russell Means gives an eye-opening 90 minute interview in which he explains how Native Americans and Americans in general are all imprisoned within one huge reservation. Means is a leader for the Republic of Lakotah, a movement that has declared its independence from the United States and refused to recognize the authority of presidents or governments, withdrawing from treaties it made with the federal government and defining its borders which cover thousands of square miles in North Dakota, South Dakota, Nebraska, Wyoming, and Montana.

Means explains how American Indians have been enslaved within de facto prisoner of war camps as a result of the federal government's restriction of their food supply and the application of colonial tactics, a process that has now also been inflicted on the United States as a whole which has turned into, "one huge Indian reservation," according to Means.

Means warns that Americans have lost the ability of critical though, and with each successive generation become more irresponsible and as a consequence less free, disregarding a near-perfect document, the Constitution, which was derived from Indian law. Means chronicles the loss of freedom from the 1840's onwards, which marked the birth of the corporation, to Lincoln's declaration of martial law, to the latter part of the 19th century and into the 20th when Congress "started giving banks the right to rule," and private banking interests began printing the money. 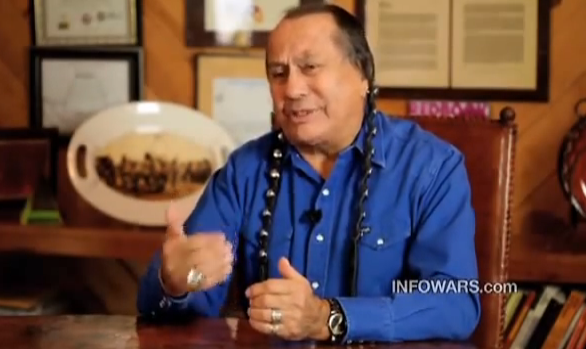 Posted by Charlotte Iserbyt at 2:42 PM