Isn't it interesting that the movers and shakers knew 20 years before the so-called phony "fall of the Soviet Union" in 1990, that  the Soviet Union was, going to crack up?

Back in September 1970 The Don Bell Report told of a White House Conference on the Industrial World titled “A Look at Business in 1990.” Below are a few key excerpts:


As importantly, international agreements between the socialist and the private property economies add a different dimension to the problems for which solutions need to be found over the years ahead. But as Jean Frere, Managing Partner of Banque Lambert, Brussels, forecasts, the socialist countries will take major steps toward joining the world economy by 1990....

And since major economic matters in all countries are also important political matters in and between countries, the inevitable consequence of these propositions is that the broader and total destinies—economic, political, and social—of all the world’s nations are closely interlocked. We are clearly at that point where economic issues and their related effects can be considered only in terms of a total world destiny, not just separate national destinies, and certainly not just a separate go-it-alone destiny for the United States. 3D, page  112.

To continue reading, see my book the deliberate dumbing down of america, and download the entry on page 112 that gives more excerpts.

Below is key text from the Press Release just issued by the U.S. Department of Labor:

President Barack Obama signed the Workforce Innovation and Opportunity Act (WIOA) into law on July 22, 2014. WIOA is designed to help job seekers access employment, education, training, and support services to succeed in the labor market and to match employers with the skilled workers they need to compete in the global economy. Congress passed the Act by a wide bipartisan majority; it is the first legislative reform in 15 years of the public workforce system.

Every year the key programs that form the pillars of WIOA help tens of millions of job seekers and workers to connect to good jobs and acquire the skills and credentials needed to obtain them. The enactment of WIOA provides opportunity for reforms to ensure the American Job Center system is job-driven—responding to the needs of employers and preparing workers for jobs that are available now and in the future.... [underlining added] 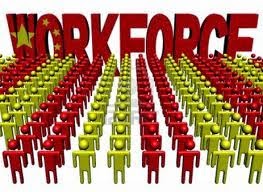 Posted by Charlotte Iserbyt at 6:14 AM