Have the Chickens Come Home to Roost? 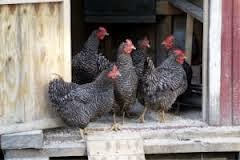 WILLARD GARVEY'S CHICKENS COMING HOME TO ROOST?...
OR DOUBLE SPEAK...
TALKING OUT OF BOTH SIDES OF THEIR MOUTHS

A LETTER TO PRESIDENT RONALD REAGAN WAS WRITTEN BY WILLARD W. GARVEY, executive director of the National Center for Privatization, dated April 6, 1984. An excerpt follows:


Privatization is now an idea whose time has come.... The knowledge, communication and computer industry can make political representatives obsolete. Privatization might well be the theme for the 200th anniversary of the Constitution. Privatization is essential for national salvation. 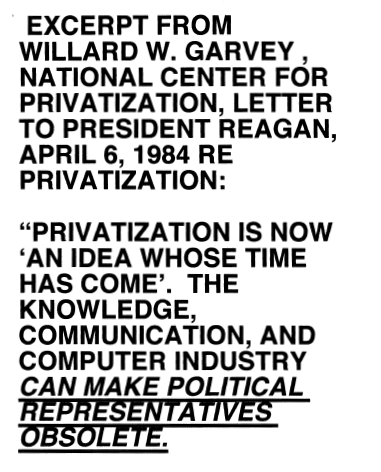 The following notation was printed on the letterhead of the above-mentioned letter:

Here are my questions pertaining to what is posted below:
The following promotional material is posted on the Internet, along with the graphic below. Notice point 5, where they are admitting that "choice" school students will get the Common Core tests!

Learn about the significant changes to the AP US History.
Monday, August 25 at 8PM.
You wont recognize America! Join New Yorkers United for Kids on a Conference Call ...

Panel includes:
Larry Kreiger- Teacher of SAT classes for over 20 years and AP classes for over 35 years, specializing in AP U. S. History (APUSH).
Dr. Peg Luksik - Educator with 35 years of experience working across all grade levels and in psychometric testing centers, Worked at the Federal level in education
Jane Robbins- Attorney and a senior fellow with the American Principles Project in Washington, D.C....

Why Refuse the NYS Standardized Tests?...

5. Testing is part of school privatization. Common Core-backer Bill Gates and Joanne Weiss, Chief of Staff to United States Secretary of Education Arne Duncan, have promoted national standards and tests by touting that they “will unleash powerful market forces” and create a national market for vendors.

What side are Luksik and Robbins on?  If they don't want federal control of standards (Communist Core), they had better stop supporting federal funding of school choice (so-called Milton Friedmanesque type of privatization) since even if they kill Communist Core in 2014, it will come back later under a new label in their favorite "choice" or "charter" school due to federal funding.

Click on link decrying fact that Common Core is Communist. "Common Core would make any communist regime proud," by Gina Miller, 10-21-13, and read her article, especially the opening paragraphs. Here is a quote:


All authoritarian regimes must necessarily commandeer their country's education system. They must own and mold the minds of the children to make the kids into pliable, group-thinking serfs of the state – "good citizens." Freedom of thought and wealth of real knowledge are anathema to communist leaders.


If  these two neoconservatives, Robbins from the American Principles Project and Peg Luksik, both of whom support the tax-funded school choice/charter agenda, are so upset over the Common Core that they now refer to articles which call it "communist," why don't they expose the even more important fact that John Ayers, ex-Vice President of Carnegie Foundation for the Advancement of Teaching, and brother of communist Bill Ayers, the Weatherman (Communist) building bomber and close friend of Obama, is heading up the international, national, and Louisiana push for Friedman-like privatization (tax-funded school choice and charters) which uses the Soviet unelected council form of governance AND communist community schools (limited learning for lifelong labor)?

To paraphrase the title of the Gina Miller article: "SCHOOL CHOICE would make any communist regime proud."

I wonder if our work on this blog has had an effect on these Trostkyites. They are having to come out of their holes, and they are making big mistakes. In fact, they do not make any sense at all. They are talking out of both sides of their mouths. National resistance to tax-funded school "choice" with unelected boards is forcing them to incorporate some of our blog language (use of the "C" word - Communist). And opposition to privatization has never been part of the Neocon agenda. See early documentation from the National Center for Privatization below that connects the "choice" agenda with key leaders; 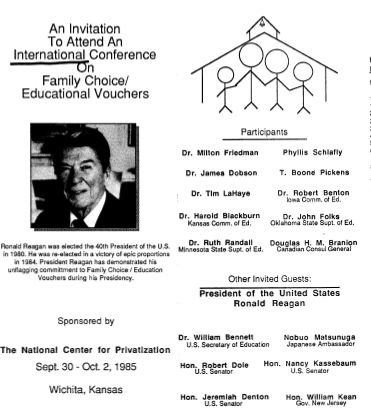 Posted by Charlotte Iserbyt at 3:15 PM