Common Core Roots are NOT Grassroots!

A SHORT LESSON IN THE ROOTS OF COMMON CORE
Federal Funding of Common Core (piece by piece over many years) through New Federalism was initially implemented under President Nixon.


The following research is so very important for Americans wondering how we ended up implementing  UNESCO's Communist Core in the schools and Regionalism/ Socialism/ Communism in America.

Socialist/Communist change agents needed New Federalism to implement regional government. Americans would never have voluntarily implemented Communism unless they had received the money, even though strings were attached.

Americans want the "free" money no matter what. When I served on the local school board, the  members ALWAYS voted for federal money (programs with underlying sick philosophy that are now showing up in Common Core). Some even voted in favor of them when they knew they were bad! (I never once voted for a federally-funded program.)

When I tried to persuade board members to vote NO, they would use the following reasoning: "If Camden/Rockport doesn't get the money, Gloucester, Mass. schools (or wherever) will get our share plus." Thus Maine received the U.S. Dept. of Education's "Gold Medal" one year for adopting the highest number of federal-funded values-destroying programs being disseminated by the National Diffusion Network.

What is most offensive is using us as guinea pigs for their outrageously offensive experiments in government. These leaders must not comprehend or respect the meaning of individual sovereignty and liberty. What outcome do they envision? Our Creator endowed us with life, liberty, and the pursuit of happiness, all of which cannot ever be micromanaged or sold. Do they even realize this?? They continue to tell us how to live with strings attached as the debt continues to lead us all towards oblivion as profligate spending skyrockets with the help of schemes like block grants and other devices under the guise of a ‘New’ [but not improved] Federalism. This cannot end well if it continues.

It appears Federalism is a much bigger topic than I realized. The federal government has gradually intervened in affairs of the state and local governments in ways that should not have been allowed from a Constitutional perspective. Block Grants and other federal aid comes with federal strings attached. It also sets up a governmental structure which strips us of purely local decision making and this is a direct threat to liberty and so should not have been allowed.  It has also left us trillions in debt to the banks. Big data and numbers can be used for evil as well as for good. Our Founders were very fearful of governmental authority. Accepting money from the feds has been a disaster for Constitutional government.  It may also take us down economically because we can’t afford all the spending.

I’ve been Googling many articles, a few you may be interested in, I’ve included below. Note: This list does not constitute an endorsement of the views expressed in these articles. It is just a BRIEF SAMPLING of what one can find when they Google "New Federalism":
Chapter 3: American Federalism - AP U.S. Government Vocabulary
http://www.apstudynotes.org/us-government/vocabulary/chapter-3-american-federalism/

Trends in Federalism: Continuity, Change and Polarization By John Kincaid
http://dspace.lafayette.edu/bitstream/handle/10385/521/Kincaid-BookoftheStates-2004.pdf?sequence=1 John Kincaid is the Robert B. and Helen S. Meyner Professor of Government and Public Service and director of the Meyner Center for the Study of State and Local Government at Lafayette College in Easton, Pennsylvania. He is also editor of Publius: The Journal of Federalism and former executive director of the U.S. Advisory Commission on Intergovernmental Relations....

Federal-State Relations Today: Back to States' Rights? www.ushistory.org/gov/3c.asp The federal New Deal programs cast the states in supporting, cooperative roles with a ... Richard Nixon was a major mind behind New Federalism. ... In the past, some states allowed people 18 years of age or older to drink alcohol, ... channeled federal dollars back to the states, but without the ...

Fiscal Federalism | Downsizing the Federal Government www.downsizinggovernment.org/fiscal-federalism
Today there are more than 1,100 different federal aid programs for the states, with each ... This was the first grant program with “strings attached. ... Reagan's “ new federalism” attempted to re-sort federal and state activities so that each level of ... Federal aid can be distributed in ... 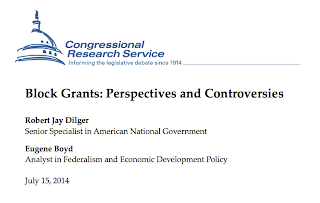