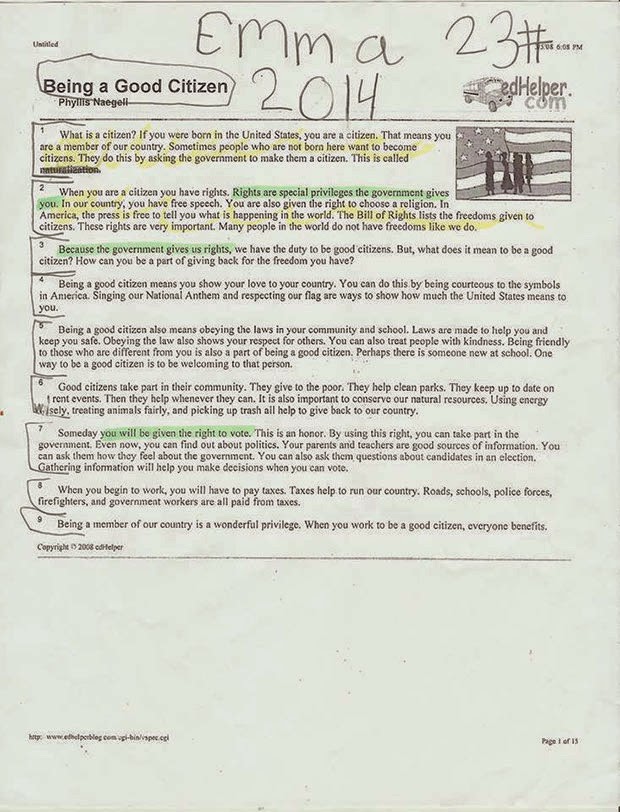 THE GOVERNMENT WILL GIVE US OUR RIGHTS?!

What a lesson Little Emma is getting in "Being a Good Citizen." As shocking as is this 2nd grader's homework, the dumbed down educator who designed it at least does discuss and appreciate the RIGHT TO VOTE!

(An appreciation, by the way, which we cannot attribute to the Trotskyite neoconservatives involved in vigorously pushing for tax-funded school "choice"/charters with no elected boards and no voter representation!)

That right to vote will be taken away from Little Emma, the second grader who filled out the test above, once ALL education (public, private, religious, virtual, and home schools) becomes tax-funded and controlled by the federal government. AFTER ALL -- What the government funds the government controls!

So, education (nationwide) which has the second largest budget after the Department of Defense, will be controlled by unelected boards! This removal of the right to vote on such a huge portion of the nation's total budget can only be expected to commence the devolution of our right to vote, at every level of government!


(7) Some day you will be given the right to vote. This is an honor. By using this right you can take part in the government...

(8) When you begin to work, you will have to pay taxes. Taxes help to run the country. Roads, schools, police forces, fire fighters and government worker are all paid from taxes.

Someone ought to warn Little Emma!

Posted by Charlotte Iserbyt at 3:12 PM