HAVE THOSE OPTING FOR SUCH SURGERY ALREADY LOST THEIR BRAINS?
Is that perhaps why they are willing to have an Internet implant?

More than 4 in 10 of the Gen X and Gen Y professionals considered themselves “supertaskers,” meaning they can do more than two things at once well, and more than half of them said they were available for work 24 hours a day, 7 days a week.

Many of them would even consider undergoing surgery to stay linked to the Internet.


The quote above comes from an article by Steve Johnson in the San Jose Mercury News, 11/06/2014, Page B09, titled "Study Finds Younger Workers Eager For Internet-Linked Brain Implants."


Millennial and Generation X professionals are so fired up about their jobs and staying connected many of them would willingly get an Internet-linked brain implant and others would give up sex for a month in order to keep their smartphones, a study has found.

The willingness to turn over one's brain to a cyber implant goes way beyond the forerunner, horrible as it is, implanting of RFID chips in one's body. Notice that the statistics are not confined to the tech crazed Silicon Valley. The survey included 3,700 people from 15 countries!

When nearly half of a couple of generations (people born in early 60's and early 80's) are willing to line up for brain implants the implications are chilling.

The article describes an addiction of proportions in which substance addiction pales by comparison. Imagine what the statistics may be with current young generations whose lives are shaped by addiction to technology from infancy through formative years of schooling dominated by ever more intrusive cyber "learning."

Prediction being fulfilled and even going beyond  the book, "1984's" predictions (but 30 years later)  with willing humanity so controlled that people volunteer to subject themselves to physical implants to insure connection to their slave masters?

The following bit of reporting is documentation beyond what I mentioned in my article "Digitizing Humanity in the Pipeline" published at www.newswithviews.com 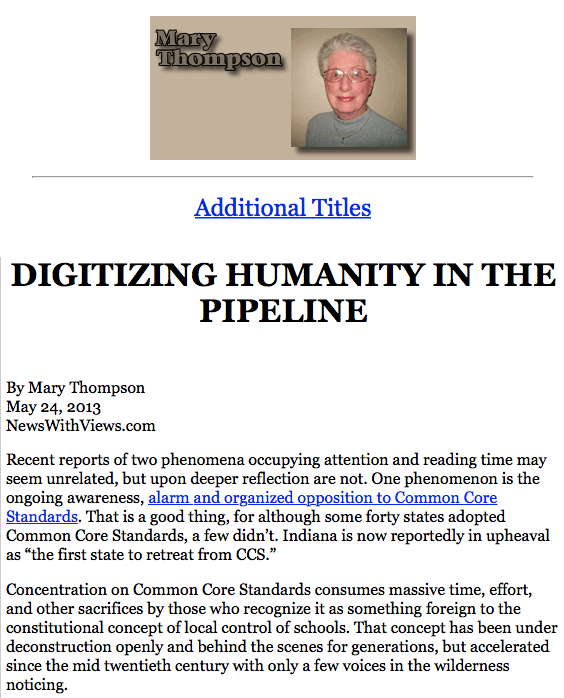 And once you read this article, you will know what all this has to do with the Common Core agenda.
Posted by Charlotte Iserbyt at 3:45 PM