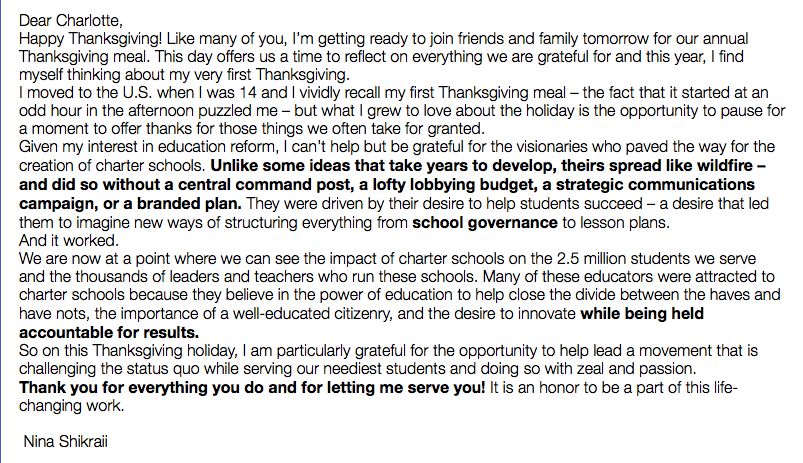 Take a look at bolded words in  National Alliance for Charter Schools fund-raising letter to me.

Below are my responses to these selected quotes from their letter:

(1) "Unlike some ideas that take years to develop, theirs spread like wildfire – and did so without a central command post, a lofty lobbying budget, a strategic communications campaign, or a branded plan."

Really? The school choice/charter school idea goes way, way back to the 1960s, at least, and is supported by the political Left, Aspen Institute, NEA at the top, corporations, tax-exempt foundations, etc. And, it has a very central command, the Heritage Foundation, which drafted the Marxist North America  Free Trade Agreement (NAFTA), and whose coffers are stuffed with tax-exempt dollars.

(3) "While being held accountable for results."

"Accountable" to whom? The corporations, the National Governors Association,  Bill Gates, Reed Hastings of Netflix, Lou Gerstner of IBM, the Carnegie Corporation, the U.S. Dept. of Education, UNESCO, OECD, etc....?

"Accountable" to every entity except the parents and taxpayers!

How can charter schools be constitutional if they are not truly accountable to the parents whose children they are "educating" and  to the taxpayers who are funding them?

The biggest and most amusing  part of this April Fool's Thanksgiving letter joke is their statement:

(4) "Thank you for everything you do and for letting me serve you!"
Posted by Charlotte Iserbyt at 1:52 PM