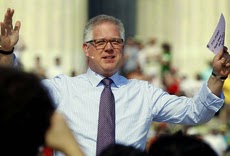 "...[I]n our celebrity-driven culture, Glenn Beck has become an overnight sensation with superstar status in his new role as a spokesman for many (though certainly not all) religious conservatives."
(Source)


Over the past several weeks this blog has been posting documentation that Glenn Beck's solution to Common Core is a fake "choice" that eliminates citizen representative government, parental freedom of choice, true religious choice, etc. Before Tea Partiers and their friends follow Beck and his agenda, they should learn more about what he really believes.

In one of his first appearances on Fox News, Glenn Beck sent a coded message to the nation's six million Mormons -- or at least those Mormons who believe in what the Latter-day Saints call "the White Horse Prophecy."

"We are at the place where the Constitution hangs in the balance," Beck told Bill O'Reilly on November 14, 2008, just after President Obama's election....

Most Americans would have heard this as just another bit of overblown commentary and thought nothing more of it. But to those familiar with the White Horse Prophecy, it was an unmistakable signal.

The phrase is often attributed to the Prophet Joseph Smith, founder of the Church of Jesus Christ of Latter-day Saints, or Mormon Church. Smith is believed to have said in 1840 that when the Constitution hangs by a thread, elders of the Mormon Church will step in -- on the proverbial white horse -- to save the country.

"When the Constitution of the United States hangs, as it were, upon a single thread, they will have to call for the 'Mormon' Elders to save it from utter destruction; and they will step forth and do it," Brigham Young, Smith's successor as head of the church, wrote in 1855....

The prophecy was renewed with each generation of church leadership. "...[T]he Constitution of the United States would be so torn and rent asunder, and life and property and peace and security would be held of so little value, that the Constitution would, as it were, hang by a thread," church apostle Melvin Ballard said in 1928....

But there is a Beckian twist in his version of the prophecy. Unlike the church leaders' versions, Beck's vision carries the possibility of a bloody end. On the night of Feb. 24, 2009, Beck outlined this prospect for his viewers. People who "don't trust the government," he said, would "see the government as violating the Constitution, and they will see themselves as defenders of the Constitution. Not a good mix. Then they take matters into their own hands."

It was Glenn Beck in a nutshell: White Horse Prophecy meets horsemen of the apocalypse. [emphasis added]


In order to further this mystical Mormon agenda, Glenn Beck and his compatriot David Barton set up a "Black Robe Regiment." Read more about this alarming agenda HERE.

CHARLOTTE'S COMMENT: Utah has played a significant role in education and societal reform agendas. (See Berit Kjos's excellent article "What the Communitarians Stand For" for more background information.) This is all part of the community education/communitarian agenda being piloted all over the county and which has many of its roots in Utah. This is all documented in my book the deliberate dumbing down of america. Community educators in Maine were sent to Utah for training in community education in the nineteen seventies. The promotion of public/private/religious partnerships got a big boost from President Reagan's Administration which was, in very un-polite circles, referred to as the "Mormon Mafia," considering how many Cabinet officials were Mormons! Especially, the one most important one, in my view, was U.S. Secretary of Education T. H. Bell. It was Reagan's White House Private Sector Initiative that placed the stamp of approval on public/private initiatives, allowing not only the community education initiatives to flourish, but the fascist/socialist/communist workforce training agenda to replace our formerly "capitalist" economic system.

Here is a tidbit from The New York Times (Elisabeth Bumiller, 3/2/05) regarding such initiatives:

Religious Charities Got Billions In Grants
President Bush said on Tuesday that his administration awarded $2 billion in grants last year to social programs operated by churches, synagogues and mosques. A White House official said that was probably the most money that the federal government had given in one year to religious charities. "It is said that faith can move mountains," Bush told a conference of 300 leaders of religious organizations in a ballroom at the Omni Shoreham Hotel. "Here in Washington, D.C., those helping the poor and needy often run up against a big mountain called bureaucracy."

For more information on how State-controlled "choice" and "faith-based" are part of the same agenda, read the monograph "The Pied Pipers of Purpose."

Posted by Charlotte Iserbyt at 8:34 AM