Databanking Everybody Everywhere
From the article above, "Bill Gates: digital learning will revolutionise education in global south",


Cheaper smartphones and tablets, advances in software and better network coverage will revolutionise the way children in developing countries learn over the next 15 years, according to the Microsoft co-founder and philanthropist Bill Gates....

“The educational software is still not such that every five-year-old could sit there and do their alphabet or try their math out,” he told the Guardian. “But I’m seeing things in the lab now which, given time, really will be pervasive...."

“The networks still aren’t there yet, but as they get out into poor countries, and as the device prices get to around the $100 range, that creates the possibility that you can use it as a financial digital debit card, or to inform a farmer about what’s going on with the weather and when they should plant, or to help healthcare workers to track their activities and inventories,” he said.

“All sorts of ways of gathering data to get these systems working at high quality become possible with these digital tools.” [emphasis added]

The reader is encouraged to continue reading the rest of this article and follow the hyperlinks.

Anita Hoge, after reading this article, commented to me:


"Just exactly like you've been saying.... every heartbeat must be monitored. Even the child in Africa who is looking at a green computer screen. Gates will make sure of the re-education of every soul that's  alive in the global village."

I replied to Anita:


"Yup, the Zulu in the green grass behind the green screen, being brainwashed, remediated, and monitored to the hilt thanks to Bill Gates and the computer/technocrats!"

This brings to mind Duston Heuston's statement in 1984 when he said:


"We’ve been absolutely staggered by realizing that the computer has the capability to act as if it were ten of the top psychologists working with one student.... You’ve seen the tip of the iceberg. Won’t it be wonderful when the child in the smallest county in the most distant area or in the most confused urban setting can have the equivalent of the finest school in the world on that terminal and no one can get between that child and the curriculum? We have great moments coming in the history of education." [quote taken from my book, page 213]

All of this mental health screening and computerized databanking is covered in the Re-authorization of the ESEA bill that is before Congress.

The future is NOW unless YOU, yes YOU... ACT! 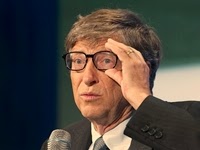 ASK YOUR CONGRESSIONAL REPRESENTATIVES AND SENATORS TO INVITE ANITA HOGE TO TESTIFY AT HEARINGS RELATED TO REAUTHORIZATION OF ESEA.

Posted by Charlotte Iserbyt at 2:37 PM