Going Round the Legislative Loop
circa 1990s 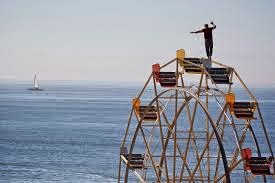 The following extremely well-documented article from the 1990s sheds considerable light on the previous two posts that investigated Michael Farris of HSLDA: Farris's Ferris Wheel... and Going Round the Farris Wheel.  It was authored by Mary McCarthy and is republished with her permission.

“…but one thing I had learned over the years is that if you sound as if you are morally certain, people will tend to believe you.  So whether or not I know what I’m talking about, I always try to sound morally certain.”
– Paul Weyrich[1]


The Religious Freedom Restoration Act (RFRA) is “an act that restores the protection of free exercise of religion which was severely restricted by the Supreme Court in Employment Division v. Smith (1990).” The issue in this case was “whether the sacramental use of peyote by members of the Native American Church was protected under the free exercise clause of the first Amendment.”[2]  In 1991, Home School Court Report indicated that “ Michael Farris is an active participant in the steering committee for this legislation.”[3]  The legislation received wide support from both Democrats and Republicans in the Congress. “A coalition” of the various groups supporting the RFRA, “appointed a drafting committee chaired by Michael Farris, president of the Home School Legal Defense Association and former long-time general counsel for Concerned Women For America. The co-chair was Marc Stern, general counsel for the American Jewish Congress.[4]

The Religious Freedom Restoration Act of 1993 became Public Law 103-141 in November of 1993.  A case involving St. Peter’s Church in Boerne, TX was decided by the U.S. Supreme Court, which tested the Constitutionality of the RFRA.  The case concerned whether the Archdiocese of San Antonio could demolish part of the historic 1923 church so as to make it larger or whether the Boerne Historic Preservation Commission could block those plans in order to preserve the church’s picturesque façade.

At issue was “whether the Congress went too far in passing the law, which seemed to override the Court’s own previous interpretation of the Constitution.”[5] By a 6 to 3 vote, the justices said Congress had usurped the court’s power to define constitutional protection of religion and intruded on the business of the states.[6]


“Even though some members of Congress immediately spoke of a legislative remedy to the Court’s finding, there now seems to be no question that an amendment to the Constitution is going to be necessary to guarantee the right of religious people and institutions to run their lives and their institutions free from government intrusion unless that intrusion can be justified by the most rigorous form of legal scrutiny.  But even more apparent is the glaring need to free ourselves from the tyranny of nine elitists in robes who have commandeered both our freedoms and our government.”[7]


St. Peter’s Church and the city of Boerne have reached an agreement.  The church will be able to demolish a section of the rear of the sanctuary and add a new one.[8]


To secure the people's right to acknowledge God according to the dictates of conscience: The people's right to pray and to recognize their religious beliefs, heritage or traditions on public property, including schools, shall not be infringed. The government shall not require any person to join in prayer or other religious activity, initiate or designate school prayers, discriminate against religion, or deny equal access to a benefit on account of religion.


Proponents claim the Amendment is necessary to reverse the trend of suppressing religious expression, including prayer in public school, display of religious symbols in schools, workplaces and public buildings and display of religious symbols during holidays.  They cite as examples removal of a cross from a San Francisco park, a student given a failing grade because she chose the life of Jesus Christ as her topic, and removal of crosses from city seals. The Religious Freedom Amendment (RFA) provides that students may initiate prayers in schools but prohibits government from composing them or compelling anyone to join. It would permit parents to choose a religious education for their children in government voucher programs and prohibit employers from discouraging religious discussions in the workplace.[10]

Opponents claim it would remove the First Amendment protection guaranteeing separation of church and state permitting any group or individual to make religious demands of public services such as schools or government offices. They fear the phrase, “deny equal access to a benefit on account of religion”, and establishes tax support for all religious groups giving any sect a Constitutional right to public funding. They also fear the Religious Freedom Amendment (RFA) would allow governments to endorse a specific religion, for example, Mormonism could be declared the officially recognized religion in Utah or Catholicism in Boston. Opponents claim the Religious Freedom Amendment is a step towards Theocracy. [11]

The Parental Rights and Responsibility Act (PRRA) is the second religious rights legislative proposals HSLDA has been involved with. “Primarily drafted by Michael Farris and Home School Legal Defense Association attorneys, the Parental Rights and Responsibilities Act (PRRA) was introduced on June 28, 1995, in the House and Senate as H.R. 1946 and S. 984.”[12] HSLDA through their Court Report continues to lobby extensively for this controversial parental rights legislation.

Besides HSLDA, many other conservative groups are working for passage of parental rights legislation including American Legislative Exchange, Christian Coalition, Concerned Women For America, Family Research Council, Focus on the Family, and Of The People. [14],[15]

The controversy centers on supporters who believe passage would ensure that parents, rather than government, would have authority in many areas of child rearing. Concerns include interference with corporal discipline, access to their children’s school, interference with health care decisions and parental access to their school, health and social service records. Critics fear the religious right is attempting to gain control of public school curriculums, prevent authorities from investigating child abuse charges and would interfere with responding to outbreaks of disease.

According to Alan Carlson of the Rockford Institute:


“Federal parents’ rights legislation sounds like a good idea, but it makes for dangerous policy.  Family policy has historically been regarded as a Tenth Amendment issue, one that’s within the purview of the states… However, the problem will not be solved by having the federal government get into the business of defining parents’ rights.

That the federal parental rights legislation would redesign American family policy is illustrated in an analysis offered by Senator John Warner (R-VA), a co-sponsor of the Senate version: “Under this act, before the US government could interfere in the parent-child relationship, the government would have to show that the action is necessary to protect a compelling interest and that the means that the government uses to protect this interest is the least restrictive available.’ Senator Warner is acknowledging that the measure would, for the first time in American history, authorize direct federal involvement in the home if that involvement can be swaddled in the rationale of a government-defined ‘compelling interest’.”[16]


“Amend Article I by adding a new paragraph 23, as follows:
23. (a) The right of parents to direct the upbringing and education of their children shall not be infringed.
(b) The Legislature shall have the power to define and enforce, by appropriate legislation, the provisions of the paragraph.”

That there can be no doubt as to the source of parental rights proposals, the last paragraph of New Jersey’s proposal states:


“The ‘Parental Rights Amendment’ has been introduced by legislators in at least 29 states to date…Major pro-family organizations are working for he adoption of the amendment across the nation, including the Family Research Council, Focus on the Family, the Christian Coalition, Concerned Women for America, Of the People, and the Home School Legal Defense Association. This amendment complements federal parental rights legislation which has been introduced by Representative Steve Largent of Oklahoma and Senator Charles Grassley of Iowa.”[22]

In July of 1997, the San Diego County school board considered a Parental Involvement Initiative submitted by Santee resident, Bob Ward, seeking to allow parents to exempt their children from activities or teaching materials they deem objectionable. It also would give parents the right to exempt their children from having to read textbooks considered to be a violation of conscience or religious beliefs. "I think this could be very important," said Bob Heckman of Of The People, a parental-rights group headquartered in Arlington, Va. "Parents are very frustrated. We see that in all the polling. This could very well be an approach that parents around the country utilize." Michael Farris, president of the Virginia-based Home School Legal Defense Association, agreed. "San Diego is on the cutting edge of a new trend," he said. "This is the kind of thing that is going to be necessary to stop the exodus from public schools."

The school board decided to table the measure and consider it again in six months. It is interesting to note that one of the primary arguments, that of curriculum selection, caused Julie McIntosh, vice president of the Ninth District Parent-Teacher Association to comment, "Parents have choice now… Parents have the legal right to educate their children at home and that is giving them entire control." El Cajon parent David Kidder said while home-schooling is an option, he and other parents who may want to teach their children don't always have the resources to do it. "The biggest problem is that a home school takes money" Kidder said.  Conservative organizations that are following the parental-rights issue nationally said that the San Diego initiative was an important model for advancing their agenda elsewhere.[23], [24]

Of the People is the primary advocate of the Parental Rights proposals. It is located in Arlington, Virginia and operated by Jeffrey Bell, who serves as President and a director. Other officers of the corporation are Secretary and director Ralph Benko of MD, Treasurer and director Francis P. Cannon of VA, and directors Lewis Lehrman of PA and John Mueller of Washington D.C.

The Restoring Local Schools Act is the third of the series.  Currently, it has no sponsor in Congress. The purpose of the Act is to eliminate the U.S. Department of Education, something Michael Farris addressed in his 1995 article, “End Federal Meddling in Education”.[25]

In 1995, HSLDA’s Court Report publication explained that “The National Center for Home Education has prepared legislation to decisively end the federal role in education. At this stage, Christopher Klicka, Michael Farris, and Doug Phillips have been working to secure sponsors for the bill.”[26]  In 1996, HSLDA revised their plan into a “three-step process: 1) first, work to abolish Goals 2000 and School-to-Work; 2) In subsequent years, push to abolish the Federal Department of Education and 3) long-term, work to abolish the whole federal role in education (about $60 billion).”[27]

Critics contend that elimination of the Department of Education would just throw it’s current duties to other agencies.  Two proposed bills (H.R. 1883 and The Restoring Local Schools Act) would have placed the functions of the Department Of Education into the Secretary of Health and Human Services department.  “Under both bills, ‘Local Education Entity’ is defined as meaning ‘a local educational agency or a public or private elementary or secondary school.”[28]  It appears the Restoring Local Schools Act would put private schools under government control for purposes of the block grant funding proposed to replace Department Of Education funding.

The Home School Legal Defense Association and it’s subsidiary, the National Center for Home Education, has actively lobbied for all three of these legislative proposals, enlisting homeschoolers in their efforts to influence Congress on behalf of these specific conservative political issues. Whether or not parents recognize what the possible consequences of these proposals are is questionable.

“That Religion, or the duty which we owe to our Creator, and the manner of discharging it, can be directed only by reason and conviction, not by force or violence; and, therefore, all men are equally entitled to the free exercise of religion, according to the dictates of conscience; and that it is the mutual duty of all to practice Christian forbearance, love, and charity, towards each other.”[29]