Censorship reflects society's lack of confidence in itself.
It is a hallmark of an authoritarian regime.
~Potter Stewart


The following news report from the UK documents this blog's ongoing concerns regarding the government funding of private, religious, charter schools with unelected boards unaccountable to the taxpayers of the municipality.

That which the government funds the government will want to control. For instance, the heavy hand of government has fallen on Durham Free School which is a Christian-faith-based government- funded school in the UK. Read the whole article HERE.


Pupils at a Christian school have been branded bigots after a young boy gave the wrong answer when asked what a Muslim was.

Durham Free has been told to close after inspectors branded it an educational failure and said some children displayed ‘discriminatory views’ toward people of other faiths. The boy’s answer to the Muslim question apparently included a reference to terrorism.

But teachers said the verdict was grossly unfair and based on a throwaway and ignorant comment made by a single pupil. They said the school’s Christian ethos made it an easy target for officials who wanted to show they were promoting the Government’s diversity agenda.... [emphasis added]

Free Schools in UK appear to be the same as charter schools in the USA. See the description below, "What are Free Schools?" 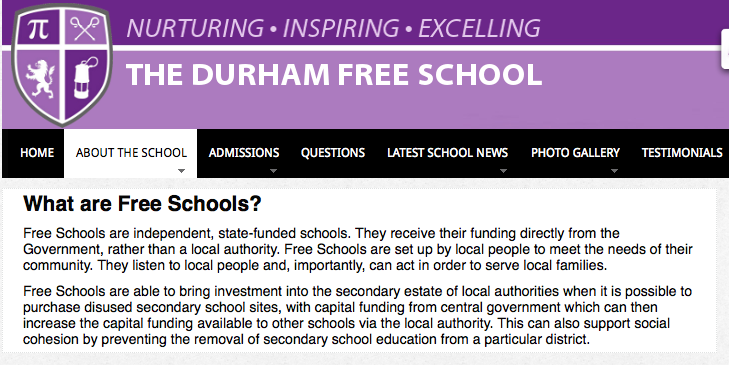 The Daily Mail article continues, illustrating how much of the controversy was over educating children for political correctness:


It will now close at Easter after Education Secretary Nicky Morgan announced her department was withdrawing its funding.

The inspecting team, which was led by Joan Hewitt, concluded: ‘Leaders are failing to prepare students for life in modern Britain. Some students hold discriminatory views of other people who have different faiths, values or beliefs from themselves.’ [emphasis added]


So much for "free schools." Notice this alarming admission that these children appear to have gone through some sort of aggressive interrogation process. The article states that


according to teachers, the team based this view on speaking to the boy of around 12 who was asked about Muslims during a group discussion. His answer included a reference to terrorism. Acting headmaster Julian Eisner, 57, said: ‘The pupil’s reply displayed a very disappointing level of ignorance but, in the context, did not provide evidence of a discriminatory attitude....

Chris Gray, principal of Grindon Hall, said: ‘It is now well known that the manner in which inspectors questioned our pupils in November was hostile, inappropriate and raises serious safeguarding issues. Ofsted’s approach to us was negative at every stage, as if the data collected had to fit a predetermined outcome.’ [emphasis added]