What Diane Ravitch isn't telling you


The Whole Truth about the "Whole Child" 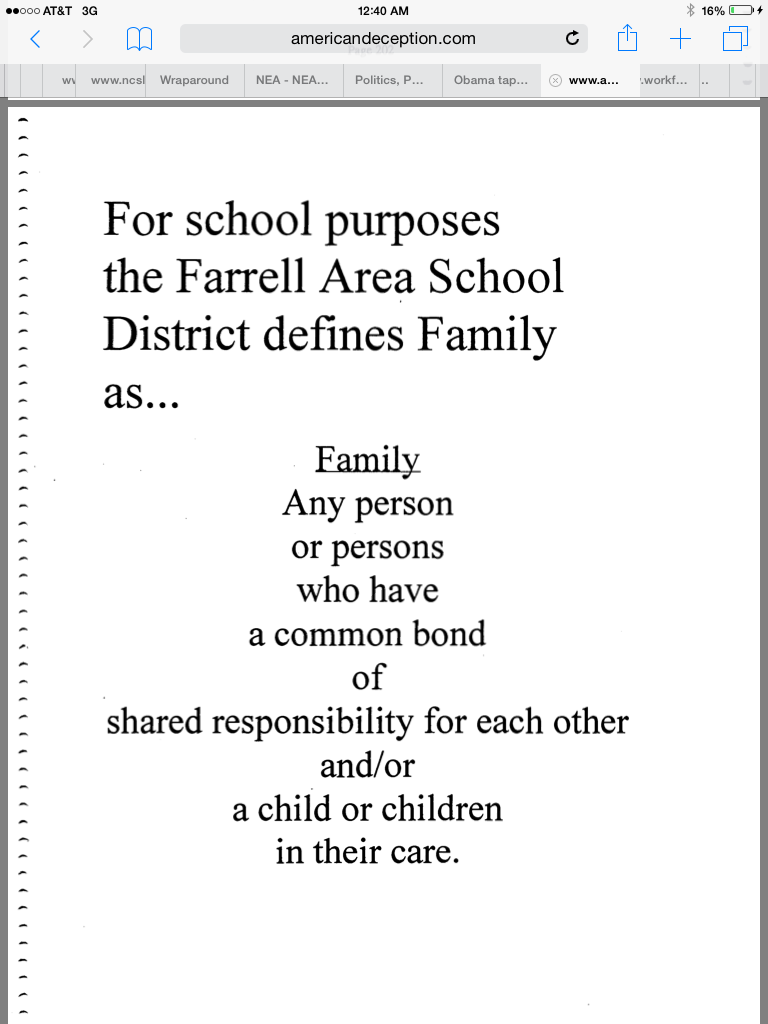 An Editorial by Anita Hoge
Reign of Error: The Hoax of the Privatization Movement and the Danger to America's Public Schools is the title of the new book by Diane Ravitch. It is favorably reviewed and summarized at the Daily Kos HERE. Ravitch's book purports to answers questions about why American education is in crisis, and what reform can be implemented. Her answers include pre-K programs and so-called school "choice." Many of her recommendations are based on Abraham Maslow's Hierarchy of Needs, which are part and parcel of the Humanistic Psychology worldview he developed.
Let's clear this theoretical debate right now.

Anyone who would quote Maslow's Humanistic Psychology (Third Force Psychology) is basing their worldview on the "whole child" theory, and the behavioral science that originated with Freud and was developed by B.F. Skinner.
The cognitive is directly related to the affective, which is directly related to behavior. THINK. FEEL. ACT. To control behavior or "emotional intelligence" you must create a conflict in what the child believes and his/her attitudes and values. This is the psychology theory being used to create the new "global worker." Humanistic Psychology is what most of the emotional, i.e., affective domain, curriculum is based on. This is the whole child theory that developed Bloom's Taxonomy of Educational Objectives. Bloom's Taxonomy was used to create the Pennsylvania EQA test, a prototype for the NAEP test, developed by the top behaviorists in the world.

Sorry, I don't need to use B.F Skinner to teach my children. (Some will remember the soft white rat Skinner activity in the Pennsylvania Functional Behavioral Assessment for babies. That should turn your stomach.)

So, now a teacher is quoted online promoting Diane Ravich, who supposedly has a cure, but the cure is based on Humanistic Psychology. Everyone jumps on board with Ravitch without researching or thinking through these issues, looking at real history, or considering the consequences of her recommendations.

Where are these people coming from who think that it is OK to use to use Humanistic Psychology in the classroom?

And Diane Ravich has a blog that I do look at from time to time! Why? Not to get information from her, but to get information from the thousands of people who send information -- to her! Realize that Diane Ravich is an education insider. She has been on every national education committee and every board from National Assessment of Educational Progress (NAEP) to the the Gordon Commission. She quotes Chester Finn and Marc Tucker constantly. (To her credit she does not like the teacher evaluations nor money being made from charter schools.) But her solutions? Let's look twice.

Here's a little history. The list about how to HELP children and families (summed up in the review of her book HERE) is right out of the Re-authorization of ESEA in the Promise Neighborhoods and Promise Schools, SB 1094, also in the Flexibility Waivers. This also sets up the Medicaid agenda to bill for every mental health check mark that teachers are providing to the federal government through the data collection and the "positive behavioral interventions and support" (PBIS). (Look at the BOSS app for Response to Intervention.) These are all systems to monitor behavior or psychomotor or actions.

The "whole child" model that Ravich is referring to is the 21st Century School Hubs that was a pilot in Farrell School District in Pennsylvania. This is where the re-definition of family evolved from. In fact, this model was used as a prototype at the National Governors Association when Clinton was Governor of Arkansas before he became President.

So what is the 21st Century Hub School? This prototype was the model when I testified to the Department of Interior National Infrastructure Health and Education Data Security Hearing on HillaryCare. This is the wrap-around mental health services that uses a school as a hub for the community to ensure that children and families are targeted for the government re-education. This includes all health care, mental health, daycare, career placement -- the entire model is womb to workplace government treadmill. Current proposal:

We need to be careful what we ask for because the federal government is willing to give it to us.

I don't think that families need this, nor is this what America needs. No more government intervention. The federal government controls the standards, the curriculum, the testing, the teacher evaluations, and the interventions. They control the compliance, the data collection, and the accountability, to make sure everyone is in line.

The illustrations below are in my work book called Womb to Tomb. Farrell School District was called the School for the 21st Century, "one stop shop." Please note that on the second page, special education, NASDE, National Association of State Directors of Special Education, designed this model. This visually depicts TITLE I and IDEA. This model always was the plan: IDENTIFY THE CHILD THROUGH TITLE I AND INTERVENTIONS WITH SPECIAL EDUCATION FUNDING. 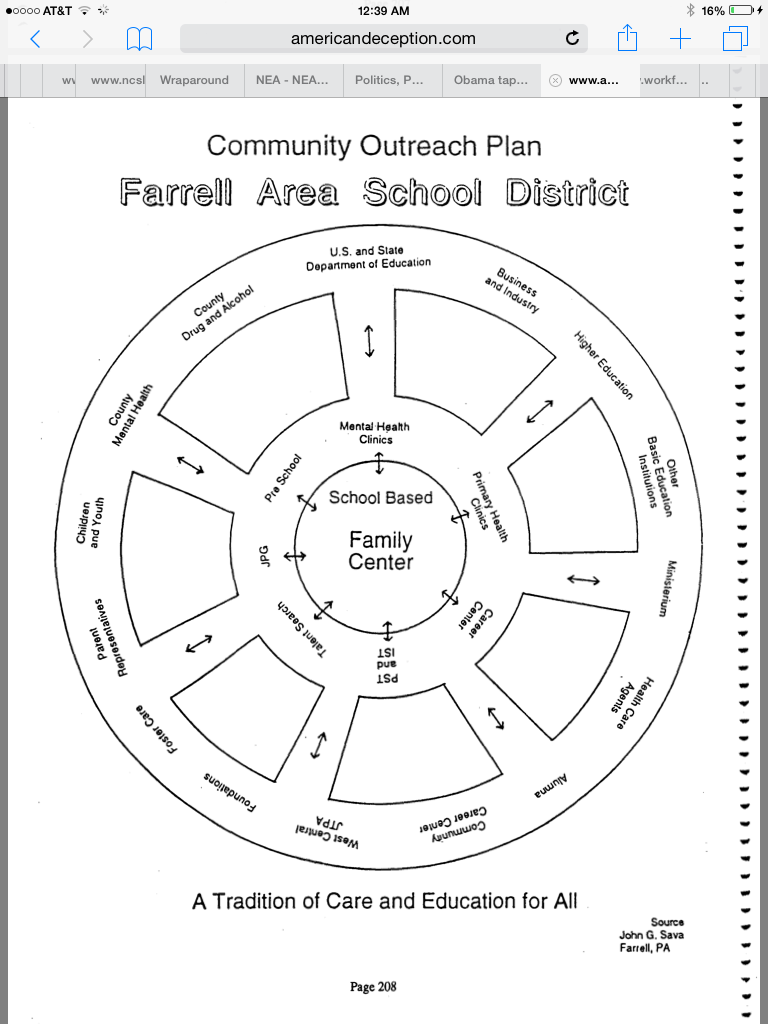 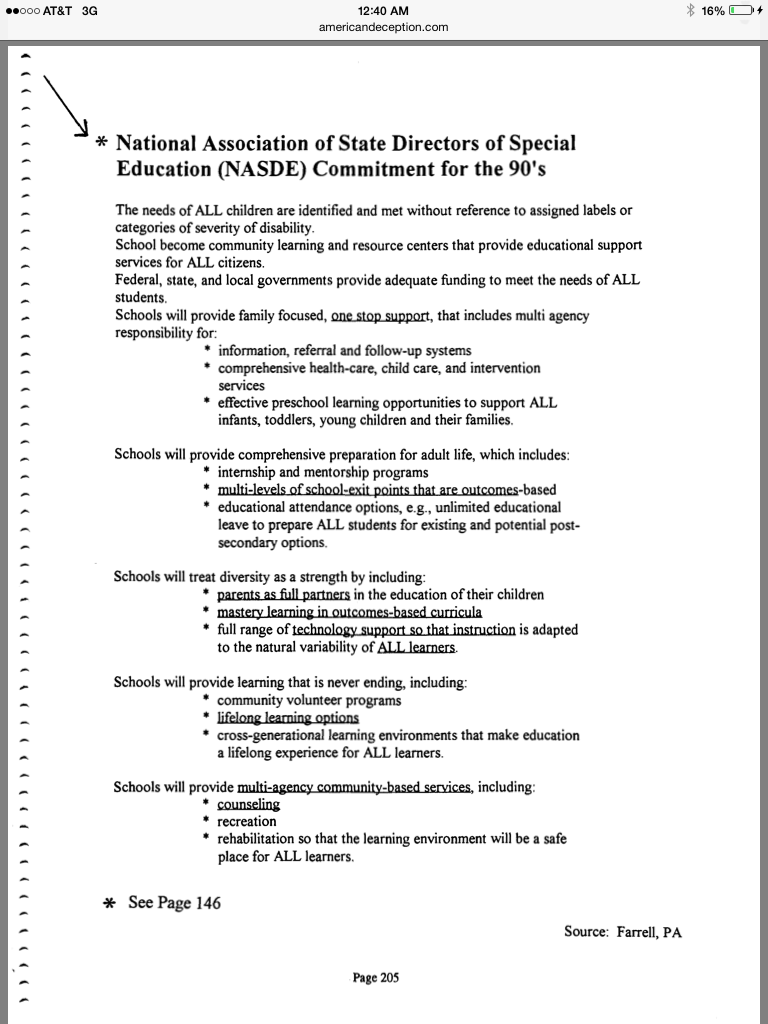 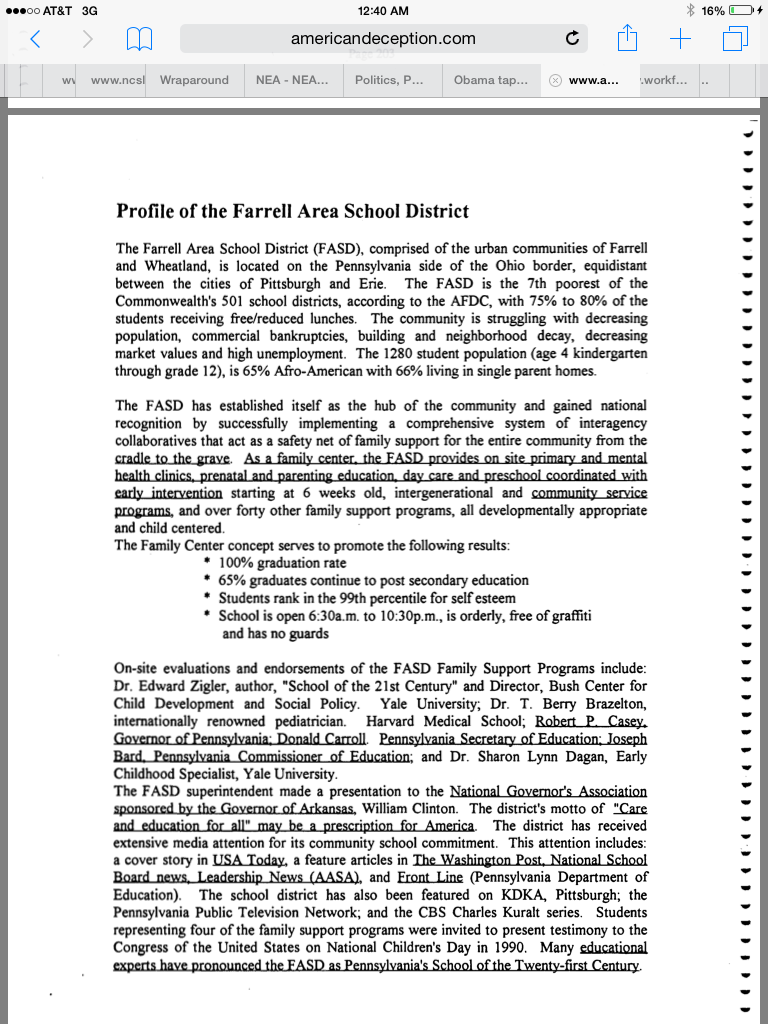 To read Anita's report Womb To Tomb, go to AmericanDeception.com and click on the Education category on the left hand column. Scroll all the way down to the bottom. It is the last report. You can click the red Download Now button to download it.