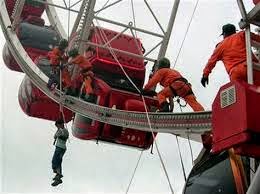 Since the post yesterday, "Farris's Ferris Wheel...", a number of individuals have sent additional links with more research and background information on the disturbing activities of Michael Farris.

Below are some further items for readers to explore. Again, read this yourself and draw your own conclusions. Warning: the information presented in this post is very disturbing.

Farris & Generation Joshua
Many have expressed concerns about Farris's involvement in creating a "Generation Joshua" ("GenJ") movement of young activists. The Baptist Studies Bulletin published an article in February 2007 titled "In Response To ... Turning Our Children Into God's Warriors." Below is a quote:


Michael P. Farris, the founder of HSLDA whose books are sold by LifeWay, wants control of Christian children from elementary school through the teenage years and beyond.  He is also the founder of Patrick Henry College, a Christian college for homeschoolers located near Washington D.C. and devoted to promoting a theocratic agenda by transforming the U.S. government to “adhere to principles of biblical morality.”  The HSLDA, in addition, is the founder of Joshua Generation Ministries, a theocratic organization which recruits young people aged 11 to 19 to “become a force in the civic and political arenas” and banish pluralism and secular humanism from America: “We believe His promise that one of us can put a thousand to flight and two can put ten thousands to flight.” 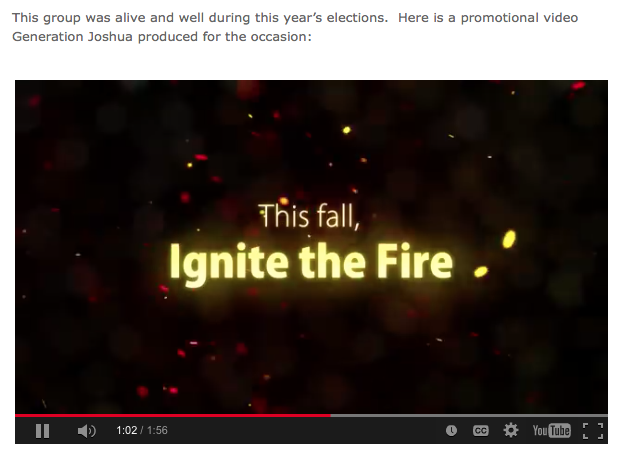 This Joshua Generation concept seems to fit the context of the rising development of a radical religious youth movement in the evangelical world. If you want to do more research read the following 6-part series: "The PASSION of the PRESENCE & the Purpose of the Passion." Part 6 includes a statement made by a leader who claims to be a prophet.


An extravagant Youth Movement is coming to the global Body of Christ that will "rock the nations".

Farris & His Model UN Team
Farris has an army of young people engaging in debates and working with the United Nations. To further global government?! This whole idea raises huge red flags. Here is just a brief sampling of information. The blog Unmasking of Maine posted an article "Michael Farris Patrick Henry College…. Model United Nations team" which links over to an April 2009 article at Farris's Patrick Henry College which described the team and its work (depicted below) 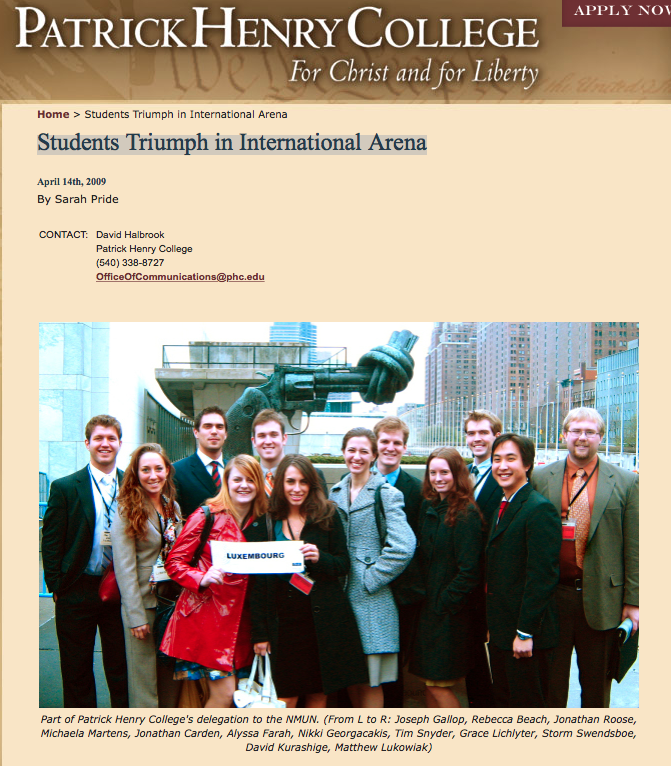 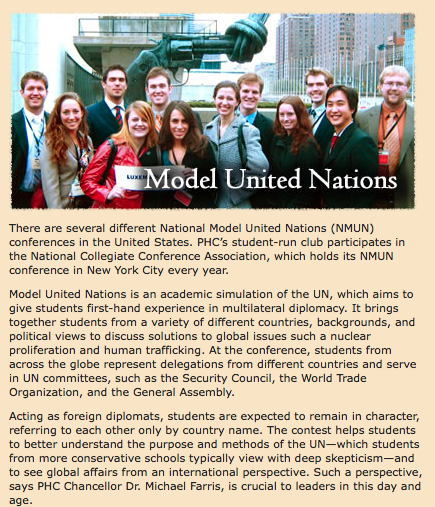 Farris & the Money Trail
Follow the money trail! The Farris Money Motive website cited yesterday turned out to be chock full of interesting current information. Readers sent in additional links from this site. See for example this page depicted below: http://www.michaelfarrismoneymotive.org/node/4 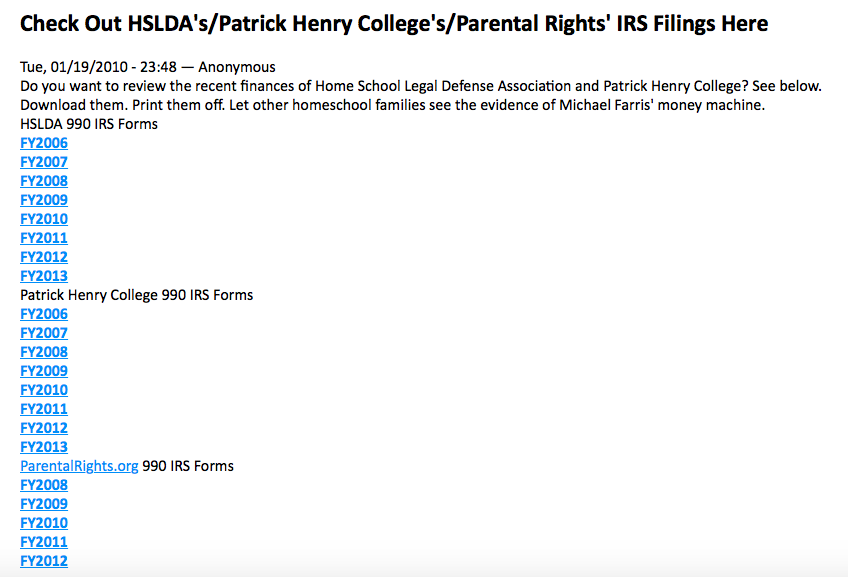 Farris & Fallout
Turns out that lots of people have been raising questions about Farris's close involvement with sexual predators Bill Gothard and Doug Phillips. See the following article where Farris's statements are analyzed: "From Silence to Exposure: Why did Homeschool Leader Michael Farris Speak Out Now?" 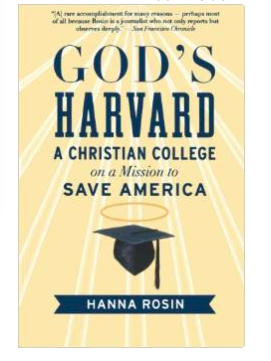 Another interesting book is God's Harvard: A Christian College on a Mission To Save America by Hanna Rosin. It might be worth a read for those who want to know the background history of Farris's Patrick Henry College. Available at amazon.com it is described as:


Since 2000, America’s most ambitious young evangelicals have been making their way to Patrick Henry College, a small Christian school just outside the nation’s capital. Most of them are homeschoolers whose idealism and discipline put the average American teenager to shame. And God’s Harvard grooms these students to be the elite of tomorrow, dispatching them to the front lines of politics, entertainment, and science, to wage the battle to take back a godless nation. Hanna Rosin spent a year and a half embedded at the college, following the students from the campus to the White House, Congress, conservative think tanks, Hollywood, and other centers of influence. Her account captures this nerve center of the evangelical movement at a moment of maximum influence and also of crisis, as it struggles to avoid the temptations of modern life and still remake the world in its own image.

According to researcher Cynthia Weatherly, on page 49 of God's Harvard, in chapter 2 entitled "Harvard for Homeschoolers," there is a disturbing paragraph that divulges:


In 2003 the college began offering a major in strategic intelligence--students in the program learn the history of covert operations and take internships that allow them to graduate with a security clearance. In their junior year, they write "open-source" intelligence reports as free research for the CIA and dream of becoming spies. "Thou shalt not lie" hangs heavy over these majors, but they balance it with God's commanding Moses to send spies to the land of Canaan. In the hierarchy of campus cool, SI majors consider themselves on top; to guard their secrecy, they're not allowed to be quoted in the student paper or even to tell fellow students their major, a warning they take very, very seriously. Several graduates have landed at the FBI and the CIA, and one worked for the Coalition Provisional Authority in Iraq. One person working in military intelligence sent Farris an e-mail saying a Patrick Henry student was the best intern he'd seen in sixteen years. [emphasis added]

Another MUST READ article dug up by Weatherly comes from the Free Republic in 2004: "Slamming Patrick Henry College (the college of homeschoolers)" Below is an alarming excerpt:


What I find most alarming about PHC is it's Strategic Intelligence Program (SIP). It's curricula is directly tied into developing "careers in the intelligence community (Central Intelligence Agency, Defense Intelligence Agency, etc.), domestic counter-terrorism and law enforcement (Department of Homeland Security, Federal Bureau of Investigations, etc.), and diplomacy (Foreign Service, State Department, etc.). These graduates will eventually work their way into positions to positively influence and shape this increasingly important part of our culture."

While PHC links to the White House, Congress and the Supreme Court have been documented, Farris could not provide information as to how many students in the school’s Strategic Intelligence Program, which started this year, have internships with the CIA, the FBI or the nation’s other intelligence agencies.

In the fall semester, SIP students toured some of the most secure intelligence facilities in the entire United States (as per our agreements, we may not disclose the names of these 3-letter agencies), and they were invited to observe training exercises at the FBI Training Academy in Quantico.”

While the extent of their access to intelligence information is unknown, SIP students have enough information to pen “a weekly digest of all major drug, immigration, and security incidents at America's border crossings called the Border Security Alert. The BSA, produced entirely by Patrick Henry students, is distributed by subscription to national security professionals and is available to the intelligence and law enforcement communities through a classified network.” [bold added]

Farris & ConCon Revisited
From across the political map one can find articles raising questions about Farris and his grandiose plans for a new constitution. The following article from the left-oriented RightWingWatch is a must read: "Michael Farris' Ironic Plan To Remake The Supreme Court"


Homeschooling advocate Michael Farris has a new campaign, the Convention of the States Project, which seeks to introduce a constitutional convention....

Farris also said that the Supreme Court should be replaced by a system of “50 justices and have the states appoint the justices for a specific term (six or eight years) with no right of reappointment” that is modelled after the European Court of Human Rights.

This is more than a little ironic since Farris regularly criticizes the Supreme Court for citing international law, including cases from the European Court of Human Rights. But Farris himself is now proposing “reconfiguring the Supreme Court after the model of the European Court of Human Rights” in order “to ensure a constitutional government.”...


“I [would] propose reconfiguring the Supreme Court after the model of the European Court of Human Rights. There are 46 nations in that court’s jurisdiction, and every nation appoints one judge. We should expand the Supreme Court to 50 justices and have the states appoint the justices for a specific term (six or eight years) with no right of reappointment. That one change would do more to ensure a constitutional government than anything I know,” Farris said.


Another article, from the political right, is filled with many interesting links: "Convention of States' Michael Farris is Grasping at Poison Straws"

Farris & His Legacy
Unfortunately the homeschooling movement has much revisionist history. Some of the pioneering homeschoolers like Virginia (Ginny) Birt Baker are not mentioned. But the following account may be of interest: "A HISTORICAL TIMELINE OF THE MODERN U.S. HOMESCHOOLING MOVEMENT"

Again, readers are urged to do their homework. All of the information presented here and in the previous post raises important question about this man and his work.

Posted by Charlotte Iserbyt at 1:50 PM