Getting to the REAL Core 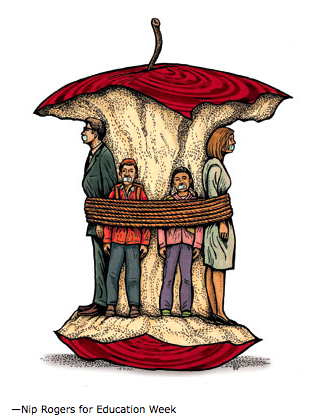 It  exemplifies, however, so much of what is lacking in discussion of CCS. It fails to get to the real "core" of what "ails" schools.

The  overarching destruction of our schools which has been in progress for decades, seems to be overlooked by too many opponents of Common Core.  Perhaps because of writers who should know better, such as Williamson M Evers, whose credentials are Senior Fellow at Hoover Institute at Stanford University, and was an assistant U.S. Secretary of Education for planning, evaluation, and policy development from 2007-2009 during the G.W Bush Administration.
So many individuals are concentrating on CCS as if Common Core were something new which just appeared on the scene to take over schools. Some education researchers, including myself, see the emphasis and near total concentration on CCS as a diversion from the history of the deliberate gradual destruction of what was once the envy of the world regarding education.

Common Core Standards are not new! This same monster was tried in the 1970's and was known as INQUIRY LEARNING or DISCOVERY LEARNING. It ruined a generation, but the machinery wasn't quite in place yet to impose it nationally, and technology wasn't quite ready for the on-going assessments associated with it. 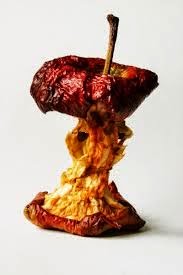 Nationally spawned and financed curricula began in the late 1960s with something called FAMILY LIFE EDUCATION. Some alarmed parents and others around the country fought that with all the energy we had. Few paid any attention. Some fixated on opposing the sex ed part of the total package, but the complete agenda involved reframing every aspect of the students' existence,  home, church, community.

The implementation of Planning Programming and Budgeting Systems (PPBS) was used to foist the comprehensive agenda on school districts. Parents were used as pawns in the PPBS model to successfully get the  METHODOLOGY in place in district governance and classrooms.

The controversies surrounding Family Life Education have long since been forgotten, with remnants of the offensive content remaining. But the METHODS have been embedded in classrooms and districts ever since. Parents could never quite grasp the concept, or believe what we tried to warn them regarding PPBS. It was the modus operandi of change agents, and its classroom methodology lives on and is part and parcel of Common Core Standards.

Unless those serious opponents of CCS become informed and understand the long march of decades of creating the chaos before CCS, they will be exhausting themselves, chasing what may be pulled  back as some level or in some states. However, not even the surface will be scratched. The fruits of at least 50 years of change agents at work in schools remains. Even if Common Core were withdrawn nationally tomorrow, it would only be the proverbial "one step back" before it will rear its head again  under a new name. Then watch for the proverbial "two steps forward" as the collectivists (Communists) always do.

The Ed Week article may be misleading in some aspects.... especially when it portrays Milton Friedman's advocacy of vouchers, opportunity scholarships, etc., as an antidote to bad schools. The writer does not point out that schools "choice" (government funding for attendance at private schools) is  designed  to destroy private schools themselves. 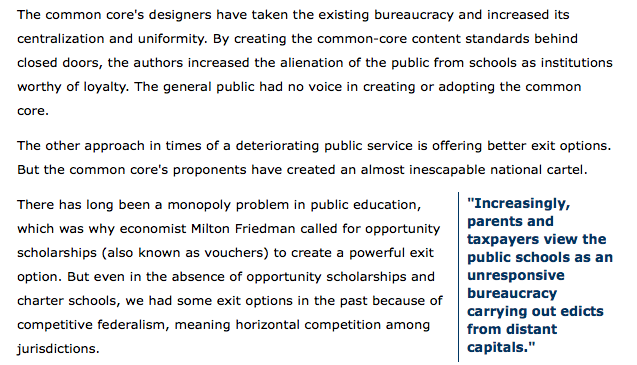 We can be pleased that there may be an awaking of parents... FINALLY. But where were all the leaders and opponents leading the charge against CCS when the entire nation was systematically, deliberately, brought to the state of such chaos years ago? The planners decided the time was right to reintroduce what they call Common Core Standards. Why the uproar and desperation only now, when the stage has been being set for over half a century, and the voices in the wilderness were ignored?

Why now? The siren song of so-called "School Choice" is tickling the ears of the self identified "conservatives" and their organizations! This at a time when they should be opposing vouchers, charters, opportunity scholarships even more vociferously than they oppose CCS! But instead many are proponents of this "schools choice"? School "choice" is the destruction of the concept of elected representation at the most local of levels, the school boards.  Enter unelected school "councils" and ultimately we will witness the destruction of taxation with representation in America.

Discerning an enemy is essential in battle. Fighting a war requires that one know how the "enemy" succeeded in capturing the "system" before effective assault can begin to push the enemy back. Individual warriors have readily available free sources to arm themselves with essential information about how things got to the current stage of CCS.

Posted by Charlotte Iserbyt at 2:31 PM