What is Title I Portability?


"Duncan: ‘Hard to fathom’ compromise with GOP on Title I portability.

Let's shine a little light on this. This was the same portability when the Senate Democrats were in power. Their version of the Reauthorization of ESEA in 2013 was called SB 1094. The only COMPROMISE was to get Democrats on board with so-called "CHOICE" for all private and religious schools. Title I portability (all children are at-risk) and "direct student services" (meaning "choice" funded by IDEA for all at-risk children) is embedded in the 2015 bills, HR 5 and Alexander's ESEA, with convoluted definitions and mandates for all public, charter, private, Christian, and Catholic schools. See "HR 5 Bastardizes Title I and IDEA."

Background: In the older Reauthorization of ESEA legislation, SB 1094 and HR 5 from 2013, there was language in the bills and amendments that were submitted for Title I portability by both Democrats and Republicans. Democrats were having a hard time agreeing to "choice" for private and religious schools. Senator Reid never brought this bill to the floor for a vote when it was released out of committee. Why? The Republican version passed the House with flying colors... passed without a whimper. So, why did Reid hold up the vote in 2013 to Reauthorize ESEA? They didn't have the votes. It looks worse now that parents know the content of the 2015 Reauthorization of ESEA bills.

Title I funds "following the child" is not a new phenomena. In fact, former Governor Mitt Romney, Republican candidate for President, had the exact same agenda for Title I and IDEA in 2012. Read closely "Romney Calls for Using Title I, IDEA Funds for School Choice":

Republicans in Washington have long been attracted to proposals to use federal funds for school vouchers, and in that context, Romney's proposal is not unusual, Michael J. Petrilli, a vice president at the Thomas B. Fordham Foundation. He described the Republican candidate's school choice proposal as "an interesting idea," though he said it could be difficult to implement, for a variety of reasons.

Federal per-student Title I and special-education funds, on their own, are probably not sufficient to cover many private school costs, though they could help if combined with state voucher money, Petrilli said. The broader challenge is that federal funding formulas currently do not distribute Title I and other funds in ways that make it easy to give it out individually among qualified students.

On the other hand, if the federal funding stream could be overhauled so that each qualified student was given a "backpack" of funding to carry to ANY school,.... Petrilli said." (Emphasis added)

This is the agenda. Overhaul federal funding formulas and distribute these federal-per-student Title I funds and IDEA funds that would follow all children in a "backpack" of funding that would go to any public, charter, private, or religious school.

The devil is in the definitions. The definitions of at-risk and disabilities that go with Title I and IDEA have changed. You no longer have to be poor or handicapped. "Direct student services" are the psychological interventions and remediations for Common Core.
In order for President Obama and Secretary Duncan to get TOTAL control of ALL education in the United States, they need "CHOICE" called TITLE I PORTABILITY (where the money 'follows the at-risk child') and "DIRECT STUDENT SERVICES" (psychological interventions and remediation funded by IDEA that will "follow the at risk child.") This was the equity in education plan, For Each and Every Child:

Also see the Compendium:
Yes, Title I portability is for every child. This is the equitable education and equitable funding that Obama promised. Every child will be taught the same Common Core psychological standards, every child be be funded exactly the same, and every child will be remediated with psychological interventions exactly the same, with integrity and "fidelity." Teachers are retrained to deliver and teach EXACTLY as the scientifically evidence-based techniques were designed. (Response to Interventions, RTI: see graph below and click on http://www.rtinetwork.org/getstarted/evaluate/treatment-integrity-ensuring-the-i-in-rti.


What is not being discussed is this: What will be measured? And how will these non-academic standards like interpersonal skills, responsibility, honesty and integrity, or grit, be scored?

Pennsylvania parents know because these social, emotional, and behavioral standards (attitudes, values, beliefs, and dispositions) were researched and piloted in our state assessment by NAEP, National Assessment of Educational Progress. NAEP and the ESEA Flexibility Waivers have incorporated these social, emotional, and behavioral standards into the Common Core standards. The Hoge complaint forced Pennsylvania Department of Education to remove the state assessment (EQA, Educational Quality Assessment) because the test was violating federal law, the Protection of Pupil Rights Amendment, PPRA. In October, 2014, former Governor Corbett expunged the Pennsylvania website portal of ALL the Interpersonal Skills Standards that were in the affective domain in order to hide them; however they remain in the model curriculum.

Congressman Kline and Senator Alexander have a lot to explain about their legislation.

So what's happening with the deals in the backroom for the Reauthorization of ESEA?


Did we say COMPROMISE? Read "Key lawmakers close to deal on education law":


A bipartisan deal to overhaul the No Child Left Behind education law is nearly complete and will be ready for a committee vote on April 13, two key Senate lawmakers said Monday.

Sen. Lamar Alexander, R-Tenn., chairman of the Senate Health, Education, Labor and Pensions committee, has been working with the top Democrat on the panel, Sen. Patty Murray of Washington.

"We are making significant progress in our negotiations," the pair said in a joint statement.

The committee has held several hearings, and staff continue to negotiate behind the scenes on a proposal designed to win support from Republicans and Democrats in the Senate. (emphasis added)


Do you like this "behind the scenes negotiating"? Do you like this "CHOICE"?  This Reauthorization of ESEA will nationalize education. This is a federal power grab. This is government controlled "big brother." Plus, these mental health DSM codes on every student will eventually eliminate the 2nd Amendment to the Constitution, through the backdoor. (NRA, YOU'D BETTER PAY ATTENTION.)

Parents, contact every private and religious school to vote 'NO" on the Reauthorization of ESEA! This is not the real choice you want. 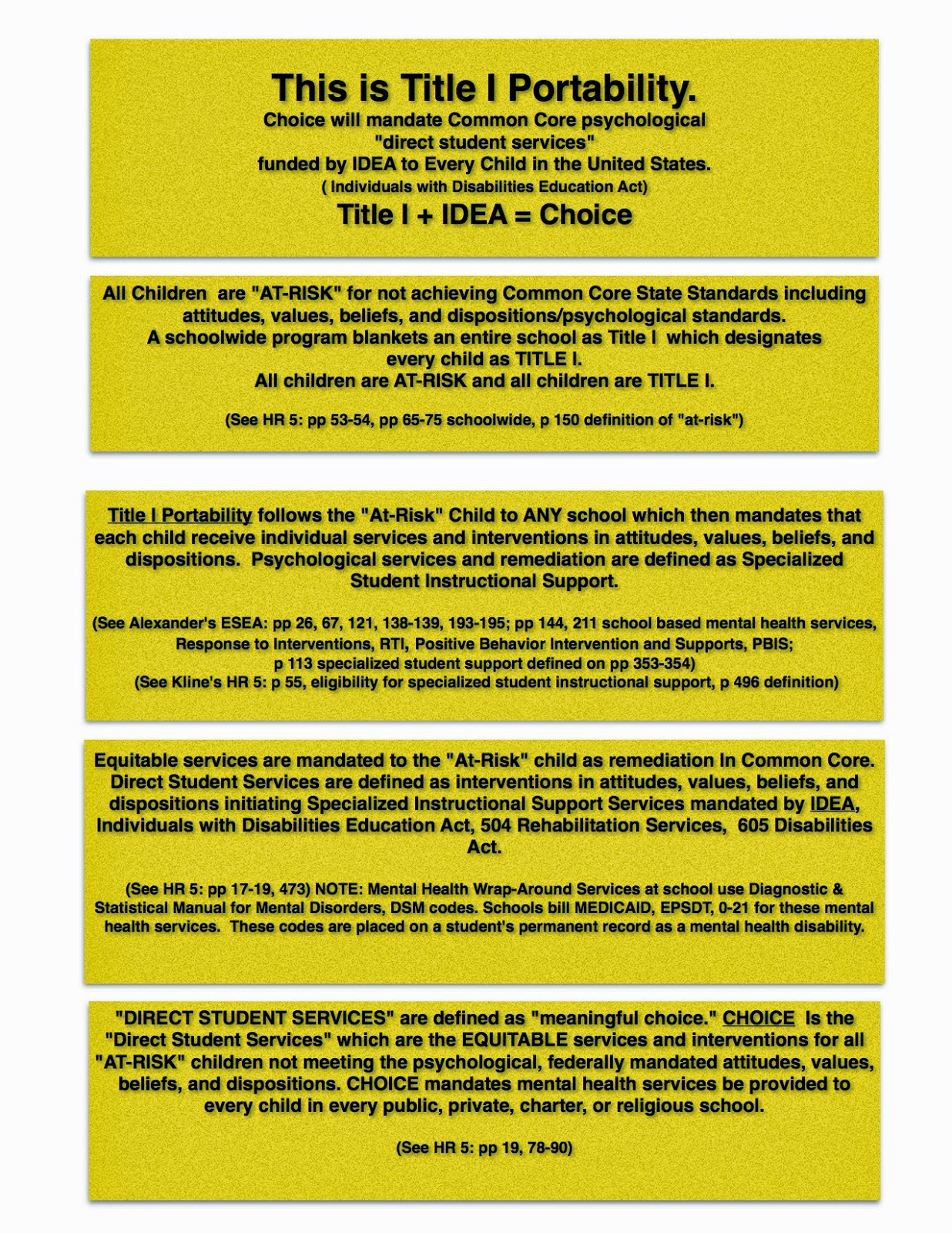 Read more: "Wrong, Wrong, Wrong on H.R. 5"
For a complete listing of Anita Hoge's alerts on this blog, including how the Reauthorization of ESEA will destroy private education in the U.S., see the post "It Wasn't US!" and scroll to the bottom.

Posted by Charlotte Iserbyt at 4:31 PM