The cry for freedom rings out

Freedom from the corporate (private, unelected) control of our public schools is beginning to resonate across the nation. It begins from within Louisiana's well-funded anti-Common Core, but pro-tax-funded charter school, phony choice movement!

From The People, LLC in Louisiana, comes the following public statement, republished with permission (Source):

As The People, LLC (Angela Alef and Karen Champagne) are aligned solely to our constitutions and are not blinded by any party or agenda - we have asked that they share our letter in the hope that it will enlighten people to the real battle for our children's future – the battle against Tax-Funded School Choice.

In the past year, we actively supported what was billed as a “Stop Common Core Forum” held in Baton Rouge on Feb. 20, 2014.  We now realize that the event could just as easily have been dubbed a "Tax-Funded School Choice Forum," given what we have learned of the panelists' ties to the school choice movement.

It is no secret that Tax-Funded School Choice (charters, vouchers, tax credits, savings accounts) requires the very things that have concerned us:  a common core of standards and data driven accountability.  It is also no longer a secret that the leaders of the Stop Common Core Movement--American Principles Project and FreedomWorks-- had always planned to use our concerns to create a movement that could be used to further their agenda of "School Choice for All." 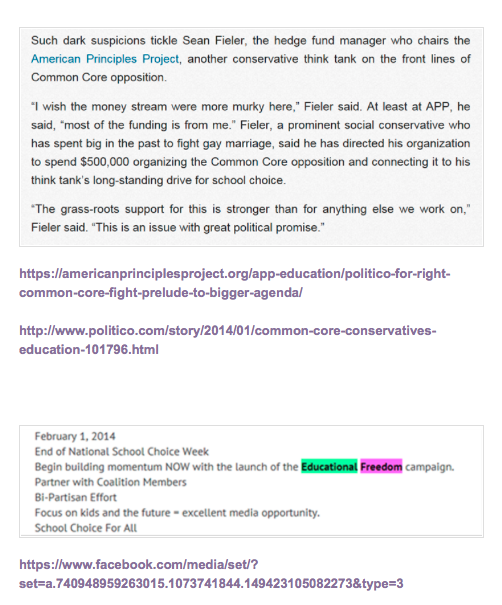 We now realize that our time, money, efforts and concerns regarding Common Core--including our support of the Baton Rouge forum--have been co-opted for an agenda that requires the very things we are fighting against!

We have watched as the Anti-Common Core efforts of various national Tax-Funded School Choice lobbying organizations (Heritage Foundation, FreedomWorks, American Principles Project, Family Research Council, CATO Institute, EAGLE Forum, Americans For Prosperity) have resulted in leading citizens across America from one dead end to another.  We urge everyone to "cut bait" with respect to these organizations that lead us to simply chant "Stop Common Core"--a chant much too narrow in focus and one which, in the end, will leave us with all the same garbage--just as it has in Indiana: http://www.huffingtonpost.com/2014/04/28/indiana-common-core-replacement_n_5228212.html

In furthering our agenda of restoring representative government; freeing our children from common standards, data collection/sharing, tests that we cannot see; and, ending the state’s practice of placing the fate of teachers, schools, districts and Louisiana's economy on the backs of our children; and, in light of the unfortunate fact that Louisiana Core continues to align itself with a network of Tax-Funded School Choice proponents who work and lobby for the very things we are fighting against, we withdraw our support for “Louisiana Core.”  We ask that our names and the names of our organizations be removed from Louisiana Core’s list of sponsors.

We hold no animosity toward any person or group and consider many in this Anti-Common Core Movement to be dear friends.  We pray that all will become empowered and enlightened with this simple truth:  "The individual Louisiana citizen" is the only stakeholder who should have a voice in Louisiana government.  Special interest groups and lobbyists should have no access to our legislators—Nor Do They Speak For Us Or Our Children!

We have come to realize that everything required for Tax-Funded School Choice existed long before Common Core and was created through the work of unelected boards and commissions. Such commissions are currently being pushed as a remedy for Common Core; however, in the honest words of Mr. Scott Richard (Executive Director of the Louisiana School Boards Association), this move to an unelected commission only serves to strengthen the Common Core State Standards Initiative; therefore, we will never support such legislation:
In order to rid Louisiana of the Common Core State Standards Initiative we must pull it out by its ROOTS:

1)  Eliminate tests that no one can see. (LEAP, PARCC, etc.)  Our children are currently being “assessed” as “human capital” for a workforce agenda having nothing to do with true education.

2) Eliminate data collecting, tracking, and sharing.  There is no need to collect data on children in order to teach them 2 + 2 = 4.

3) Louisiana has the strongest student data privacy law in the nation - ACT 837.  Any attempt to "tweak" this bill is a move for Tax-Funded School Choice and against our children's safety and futures.

4) The corrupted accountability system in Louisiana must be abolished. We will do well to remember that government is supposed to be accountable to the people--not the other way around.

5) Eliminate Tax-Funded School Choice.  This agenda leaves the “choosing” only to the businesses that own the charter and voucher schools while destroying private schools, traditional neighborhood public schools and homeschools.

Since this agenda is being furthered by both political parties, we ask all legislators to ask yourselves:  Do you really intend to populate our educational system with unconstitutional public/private partnerships that answer only to unelected boards--leaving the citizens of this state out of the equation?  Do you really favor the very thing over which our American Revolution was fought—Taxation Without Representation??

Thankfully, there are Democrat, Republican and Independent legislators who have been willing to begin the work of returning Louisiana’s educational system to the taxpayers, standing up for the rights of citizens and restoring representative government in our state:

Thank you, Rep. John Bel Edwards (D) and Rep. Kenny Havard (R) for your attempts to slow the Charter School expansion.  Thanks also to Rep. Schroder (R) for his sponsorship of laws which provide fines/penalties for violations of the 4th Amendment Rights of public school students, return local control to the districts and acknowledge parental authority in accessing their children’s instructional materials. We extend our thanks, as well, to Rep. Jerome “Dee” Richard (I) who recently expressed his intention to protect our representative government through preservation of our locally Elected school boards.

For those of us who have been to our Capitol and witnessed our legislature being run as the playground for the business lobby/special interests, this has ceased to be about “party.” Witnessing this relentless trampling on the rights with which our children are born has caused us to become laser-focused on one question and one question only:

Which of You Will Honor Your Oath to Defend and Protect Our Constitutions? 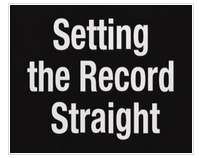 Read more about this on the blog. Start with the history of "choice" in Louisiana, which gives some background to this public statement:
The Deliberate Dumbing Down of the Village: How New Orleans Charter Schools have become the Global Model for the Community Education Agenda
Hurricane "Choice": The brutal facts about so-called School "Choice"
Facts regarding Tax-funded School "Choice"
Posted by Charlotte Iserbyt at 8:09 AM