BOSSES Need to be Fired!

“If parents can’t even get a hard copy of the current high stakes assessments that their children are taking now, how are they EVER going to get evidence, much less be aware of, the assessments given to their children via computer games or teacher smart phone apps based on a child’s experiential or project-based work, or any of the other invisible assessment model coming down the pike?”
~ Mari Caplan, abcsofdumbdown
(quote attributed to Charlotte in WND article)


WND Leo Hohmann of WND picked up on an article by grassroots researcher Mari Caplan that was run on abcsofdumbdown on 2/14/15 titled "Watch Out for Opt Out!" in which she described the BOSS app, the "Behavioral Observation of Students in Schools (B.O.S.S.) software which was designed to enable psychologists to observe..." [students].


Enter the BOSS app. It is just one of countless new data-collection products available to school systems looking to collect data on the sneak.

BOSS stands for Behavioral Observation of Students in Schools. The app was designed to “enable psychologists to observe” patients but is now being marketed to schools interesting in tracking students’ behavioral patterns.

Created by the British-based textbook giant Pearson, the BOSS app can be loaded onto a smartphone and used to secretly monitor every move of targeted students in the classroom.

MY PROPOSALS:
If we parents and teachers can't put an end to the radical privacy-invading experimentation going on under the label of "education," perhaps the students themselves (the guinea pigs) should be enlisted to FIRE BOSS AND THE BOSSES ALLOWING SUCH EXPERIMENTATION on the very human beings who are captive in the classroom.

Step #1: The federally-funded Dept. of Education is nothing but an expensive NIGHTMARE which must be fired for once and for all.

Students should first start by calling for firing the No. 1 BOSS, the U.S. Dept. of Education; they can then proceed to calling on the firing of their respective BOSSES: Individuals in State Departments of Education, State Boards of Education, and then ultimately local Superintendents of Education and locally elected school board members.

They should make it very clear before such an announcement that they are giving the above-mentioned BOSS groups, agencies and persons one month to clean up their outrageous illegal and unconstitutional acts being perpetrated under the very expensive guise of academic education,  testing, assessment, and monitoring, etc.

The students should set up BOSS monitoring offices at every single school in the nation K-12.

Step #2: Those individuals in BOSS leadership positions, etc. who, after one month, have refused to cease and desist in their illegal experimentation on students, will for a certain (undetermined) period of time be subjected to the same unlawful experimentation being imposed on students. Students themselves will be in charge of monitoring the behavior of the #1 BOSS: Secretary of Education Arne Duncan, and down the line to the least important BOSSES: elected school board members.

Pearson should provide the students with the necessary BOSS apps at no cost to the students. 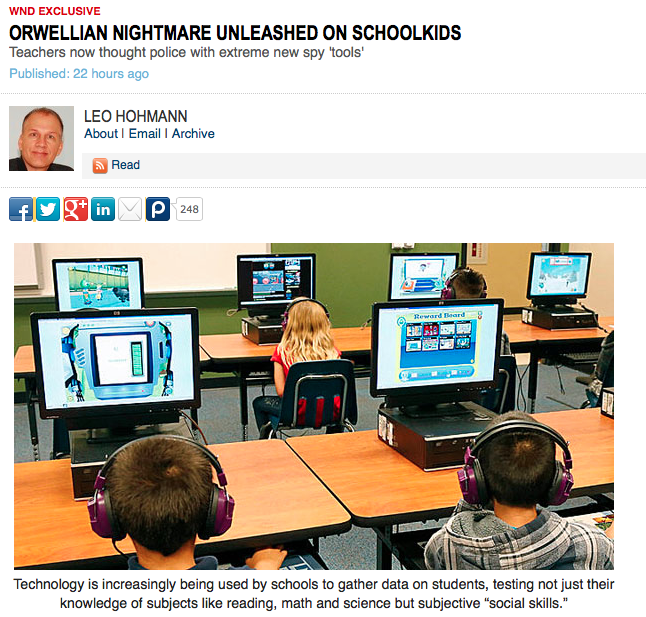 More information can be gleaned from the WND article:


Does little Johnny fidget in his seat a bit too much? Does he socialize with the students around him in an appropriate manner? Does he tend to stare aimlessly out the window when he should be paying attention to the teacher?

All of this information can be pulled in and stored in an individual dossier for later analyzing and assigned an intervention and remediation that will deal with Johnny’s shortcomings, whether they be laziness, lack of assertiveness, over-aggressiveness or whatever psychological problem the app may discover.

BOSS app can be downloaded from iTunes for $29.99 and comes in age-appropriate versions from pre-K through 12th grade. The product description boasts that BOSS is able to “record students’ behaviors in real time. The BOSS software uses interactive buttons labeled to a particular behavior for the observer to press while observing a student during a given duration. The software keeps track of the amount of times a behavioral button is depressed during an observation.”

The app tracks “a student’s active or passive engagement in activities” and will collect data and email it to the teacher “for future use to help support a disability diagnosis,” the Pearson promotional material states.

The BOSS app is not the only new technology percolating in the education industry that has the ability to invisibly assess students in real time without their knowledge, or the knowledge of their parents. (Source) 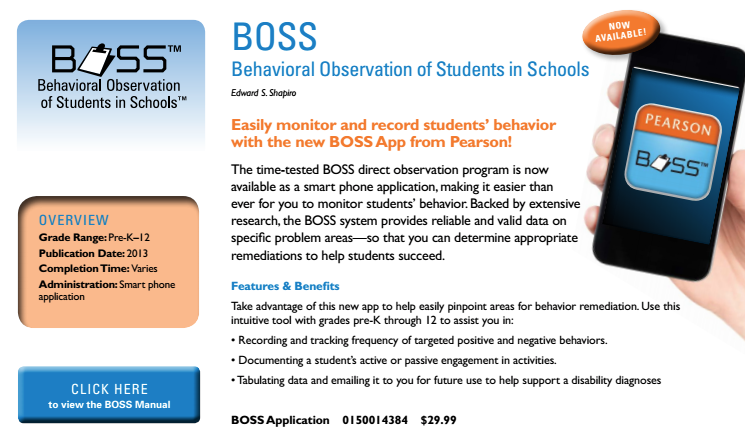 For more information about BOSS, and the many alerts and articles that have been posted on this blog, read:

Posted by Charlotte Iserbyt at 10:37 AM