No Way, ESEA!
The Switch from Academics to Outcome-Based Skinnerian Systems Management
The following three points indicate why merely trying to eliminate "Common Core" will not work.

1. The Accountability System was piloted by government funding thought the original  Elementary and Secondary Education Act (ESEA) of 1965 in around seven states in the early 1970s.  It was then adopted by all states across the country. It is a "SYSTEM" originally based on Benjamin Bloom's Taxonomy. It is Outcome-Based (OBE), and it is essentially uniform in every state with different sounding names. It is based on the Total Quality Management system (TQM) or Planning, Programming Budgeting System (PPBS), both of which are business systems designed for quality product management. But this is being used on your child. This system established standards, assessing, and testing, and it is already in place across the country.

Retired educator, Patrick Huff, Ph.D, who recently wrote a blog post titled "New Jersey Superintendent Reveals Pearson Spying On Students," published a book that details this and much more: The Takeover of Public Education in America .

2. It is all about State-prescribed ACCOUNTABILITY, onerous requirements placed on children and teachers for BEHAVIORAL OBJECTIVES. California was ground zero for this sort of experimentation. In my book, the deliberate dumbing down of america, pages 97-98, I published an excerpt from an early effort, a 1971 report, Education: From the Acquisition of Knowledge to Programmed, Conditioned Responses, which was submitted by Assemblyman Robert H. Burke (70th California Assembly District) to the California Legislature:


INTRODUCTION
Several months ago, my office began accumulating material which had particular significance in the area of Planning, Programming, Budgeting Systems because of its potential use as a tool of fiscal accountability in the field of education. As we searched into the information available on the application of this subject in education, it became increasingly difficult to see any relationship between the proposed programs and fiscal accountability. It was apparent after a study of the methods proposed for use by the schools for accountability purposes that fiscal accountability was being minimized and that techniques were being promoted for achieving behavioral objectives. Other seemingly unrelated organizations, projects, and programs were uncovered because of their influence on the application of accountability methods. They were as parts in a puzzle—analyzed by themselves, each of these projects appeared to be either harmless or an expression of someone’s “dream.” When linked together with other “harmless” programs, they were no longer formless but could be seen as an entire package of plans outlining methods of implementation, organization structures (including flow-charts), computerization, use of behavioral profile catalogs, and goals and objectives determination. [all emphasis added]

3. The move to stop Common Core cloaks a hidden agenda, a phony "choice" that offers no choice at all. It includes vouchers, charter schools, etc. "BE AWARE OF THE FACT THAT THE VOUCHER SYSTEM IS LURKING IN THE WINGS TO BRING THE PRIVATE SCHOOLS INTO THE NATIONAL CONTROL." This statement comes from Mary Thompson of California, who gave a very important speech regarding Planning, Programming, Budgeting Systems (PPBS) on June 11, 1972 which is excerpted below from pages 110-111 of my book:

When I was first asked to speak to you about PPBS (Planning, Programming, Budgeting Systems), I inquired whether it was to be addressed to PPBS as applied to education. I shall deal with it at the education level today, however you should remember that PPBS is a tool for implementing the very restructuring of government at all levels in every area of governmental institutions. What is involved is the use of government agencies to accomplish mass behavioral change in every area....

PPBS is a plan being pushed by Federal and State governments to completely change education....

One leader of education innovation (Shelly Umans—Management of Education) has called it “A systematic design for education revolution.”...

In a systems management of the education process, the child himself is the product. Note: the child... his feelings, his values, his behavior, as well as his intellectual development....

PPBS is the culmination of the “people planners” dreams....

Then in 1965 the means for accomplishing the actual restructuring of education was provided in the Elementary and Secondary Education Act (ESEA). President Johnson has said that he considered the ESEA the most significant single piece of legislation of his administration. Recall that it was also the same year of 1965 when the presidential order was given to introduce PPBS throughout the entire federal government. 1965 was the year which unleashed the actual restructuring of governmental processes and formally included education as a legitimate Federal government function....

PPBS is the systems management tool made possible by technology of computer hardware to affect the planned change....

In order to make an explanation of PPBS intelligible, you must also know that education itself has been redefined. Simply put, it has become the objective of education to measure and diagnose the child in order to prescribe a program to develop his feelings and emotions, values and loyalties toward predetermined behavioral objectives.... Drawing it right down to basics, we are talking about conditioned responses in human terms. Pavlov experimented on dogs!...

Taking each element of PPBS will show how the process is accomplished.PLANNING—Planning phase (please note that the process involved with a systems approach is always described in terms of “phases”) always includes the establishment of goals committees, citizens committees, needs assessment committees.... These are referred to as “community involvement.” The committees are always either self appointed or chosen—never elected. They always include guidance from some trained “change agents” who may be administrators, curriculum personnel or local citizens. Questionnaires and surveys are used to gather data on how the community “feels” and to test community attitudes. The ingeniousness of the process is that everybody thinks he is having a voice in the direction of public schools. Not so... for Federal change agencies, specifically regional education centers established by ESEA, influence and essentially determine terminology used in the questionnaires and surveys. The change agents at the district level then function to “identify needs and problems for change” as they have been programmed to identify them at the training sessions sponsored by Federal offices such as our Center for Planning and Evaluation in Santa Clara County. That is why the goals are essentially the same in school districts across the country. It also explains why three years ago every school district was confronted with the Family Life Education issue at the same time....

Unknowing citizens’ committees are used by the process to generate acceptance of goals already determined. What they don’t realize is that professional change agents are operating in the behaviorist’s framework of thought and Mr. or Mrs. Citizen Parent is operating in his traditional education framework of thought. So, the local change agents are able to facilitate a group to a consensus in support of predetermined goals by using familiar, traditional terms which carry the new behaviorist meanings....

Another name for this process is Participatory Democracy, a term by the way, which was coined by Students for a Democratic Society [A 1960s radical group, see SDS, ed.] in their Port Huron Manifesto to identify the process for citizen participation in destruction of their own political institutions.... 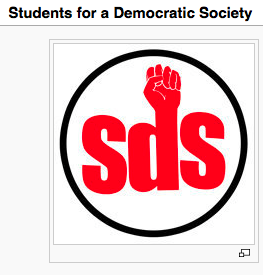 We believe the time has come to establish private schools to keep our children from falling victim to the behaviorists while there is still opportunity to do so. BE AWARE OF THE FACT THAT THE VOUCHER SYSTEM IS LURKING IN THE WINGS TO BRING THE PRIVATE SCHOOLS INTO THE NATIONAL CONTROL [emphasis in original].

For more information on the behavioral goals for children in this "system" see the month of October 2014 which covered Pavlov, Skinner and the experimentation on children. Click HERE and read through the posts that show up on the right side column of this blog.

For more information about the change in government structures, see the following blog posts:

Posted by Charlotte Iserbyt at 8:22 AM