Out of the mouth of babes!


"Published on Mar 18, 2015
"Sydney Smoot, a fourth grader at Brooksville Elementary, shared her concerns on testing in schools with members of the Hernando County School Board at their regular meeting on March 17, 2015."

Is this talented young lady's plea before her local school board heralding the beginning of students joining with grassroots parents and teachers assault on all pending legislation to reauthorize the non-academic/lifelong workforce training ESEA? This is encouraging to watch after blog's many months of hard work, getting the message to the grassroots, to stop the first freedom-killing bill, HR 5! Read, for example: "DRILL ‘EM AND KILL ‘EM"

This courageous and heroic speech by a Sydney is just what I was talking about on Monday, the 16th of March, during my interview on Jeff Rense's show (listen HERE), where I made an impassioned call for students and teachers to join in the effort to bring American education back to its original PURPOSE -- which is spelled out on this blog http://abcsofdumbdown.blogspot.com:

We believe in academic education for the upward mobility of the individual student NOT Skinnerian outcomes based/performance-based, with its constant assessment, including privacy-invading questions, now using Pearson's BOSS app, the "Behavioral Observation of Students in Schools" (B.O.S.S.) software to "train" your child to spin off profits for the global elite! Read: "BOSSES Need to be Fired!"

We believe in academic American public education, as it was prior to 1965, when it was the best in the world! (See: "How Kenny Hignite Became Famous.") The passage of the original ESEA in 1965 commenced the shift from academics (what you know in your head) to workforce training (Skinnerian performance/outcomes based education necessary for global workforce training). All of this is now going in under all the reauthorization legislation, including HR 5, which  the grassroots killed several weeks ago!  Read: "Grassroots Activism on H.R. 5 - Student Success Act"

For all of you grassroots Americans who are waking up to the realities of this education reform: 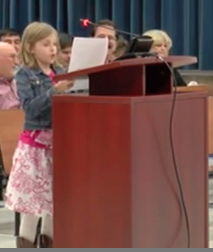 Keep calling your your D.C. elected officials with message: "We don't want your freedom-killing ESEA. All versions are simply clones of HR 5 and should be voted down." Read: "Wrong, Wrong, Wrong on H.R. 5."

Only Americans can stop the above bills in their tracks.

If little Sydney can speak out, you can, too!

Only grassroots Americans exercising their Constitutional freedoms can abolish the U.S. Dept. of Education, and stop future separate funding from Health/Mental Health and Human Services and Labor, from whence all the 50 year old atrocious academically inferior and values destroying education programs have emanated. Read: "HOW TRADITIONAL ACADEMIC EDUCATION WAS KILLED!"

For more information, read this blog's many posts about the bill. For a complete listing of Anita Hoge's alerts on this blog, see the post "It Wasn't US!" and scroll to the bottom. 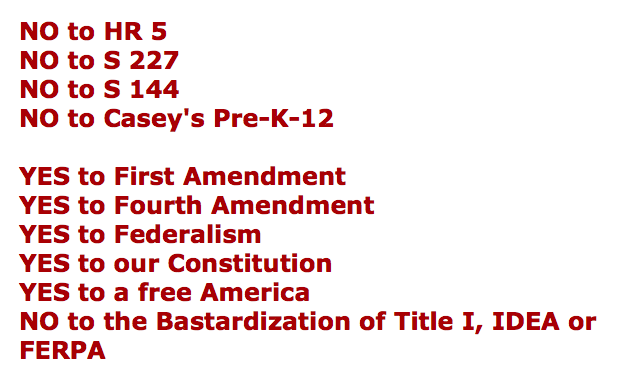 This blog is a treasure trove of helpful research information for those who want to become better informed. It has been posting since May 2014. Read especially:
Study the background issues by reading the whole month of October 2014 posts: http://abcsofdumbdown.blogspot.com/2014_10_01_archive.html
Posted by Charlotte Iserbyt at 5:53 AM