Helpful Hints... from one activist to another...
for contacting your Congressmen and Senators

Today I called my Democratic and Republican Congressmen to ask them to vote against HR 5,  ESEA.  (See a summary of this bill on the previous blog post: "ALERT: HR 5, the Student Success Act of 2015." )

1. The bill is over 1000 pages long, yet it is being rushed through Congress at breakneck speed. It's a mishmash of old and new legislation. WHO HAS EVEN READ IT?  Will it be another ObamaCare bill fiasco?

2. It will cost the country 25 Billion dollars to continue to dumb down our students with Common Core for menial job training.

3. It is elitist. Most of the country's children will be dumbed down for the labor force with little to no upward mobility, while 10% of the nation's elite students will receive a real education to run the country.  The menial laborers will receive only minimum basics and brainwashing in group think.

4. Parents' rights are eroded or eliminated. Pages 488-489 of this federal bill requires parental "involvement" (ominously defined by the feds). The feds will be prescribing onerous requirements that you parents must fulfill. This represents a terrifying governmental intrusion into your family's personal lives!

5. This bill will be abusive to children. Children who break down under the pressures, due to the "drill  'em and and kill 'em" Skinnerian animal training, will be referred to the mental health clinicians for attitude/belief adjustment. 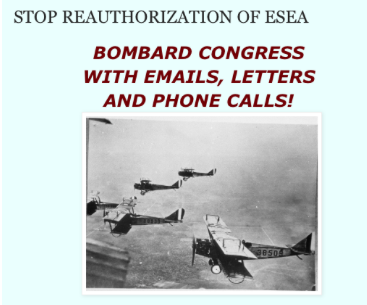 7. This bill is un-American. It has the very real potential to create Constitutional chaos, and pandemonium in local school districts across our country.

A note of encouragement:
When I phoned, the aides were very attentive. Some told me my points were very well taken. They seemed to listen in earnest and a lot of them thanked me quite sincerely for taking the time to call. I appreciated their attention. There was kindness on both ends of the line. I feel that most, if not all the aides, will definitely pass my views and information on to their bosses.

If I recall correctly, the old HR-5 which was defeated  in 2013, did not receive one Democratic vote.

We need to lobby our Republican and Democratic Congressmen and women to make sure that anti-HR 5 position spreads throughout the Halls of Congress.


The above was a A 3D Research Report by Betsy Kraus