Home School Legal Defense Association (HSLDA) has done it again—made us scratch our heads and wish we could ignore their actions. A previous post titled "ACT & Common Core" from a “grassroots mom” did an excellent job of explaining the problems with the ACT College Entrance Examination. The most obvious problem being that it now “is aligned to match the ‘learning’ gained from the Common Core Standards.” ACT states that it is “developing a holistic understanding of readiness—for college, for career, and for work.”  Horrors!

Are these not the very things that homeschooling parents consider problems and what leads them to decide to make the sacrifices they do to teach their children other standards, like academics?

Then why, may I ask—and so should you—is Michael Farris's HSLDA describing legislation that “will give homeschool families the right to submit a passing score (23rd percentile or higher) on an SAT, ACT and PSAT test to satisfy the year-end assessment requirement” in Virginia law under the column entitled “Good Bills Moving Forward” in their February 10th newsletter?

Senate Bill 1403 will also give homeschoolers the right “to submit International Baccaulaureate  assessments for consideration.” Why? Do Michael Farris and HSLDA approve of the requirements for passage of these tests be taught by homeschoolers?

One could believe that the lawyers for HSLDA working the halls of the Virginia Legislature might make a mistake on one bill, but three? Senate Bill 1403, House Bills 1753 and 1754 all deal with these tests being used by homeschoolers and the introductory statement in Farris’ newsletter about the movement of this legislation states

There have been many occasions in the past that the errors and dangers of this very activity have been brought to Farris’ and HSLDA’s attention, to no avail. This move puts homeschoolers in jeopardy. HSLDA always ends their reports with the injunction “Protect your family.”

I agree! Protect your family by stopping HSLDA’s actions.

I refer the reader to a vintage early 1990s article "How Will Outcome-Based Education Affect Home and Christian Schools?" by Marla Quenzer and Sarah Leslie, still archived on the Internet. At that time they were attempting to inform HSLDA of the encroaching testing dangers to homeschoolers that were becoming very evident as a result of Anita Hoge's groundbreaking research.

This is old information. Apparently Michael Farris still doesn't "get it."

After a discussion of the implications of Clinton's Goals 2000 Eight National Goals, the authors warn homeschoolers of the dangers inherent in the new standardized tests:

ASSESSING POLITICAL CORRECTNESS
These eight goals summarize the publicly proclaimed basis of education reform. How will the government measure progress toward these goals? One mechanism is the National Assessment of Educational Process, the NAEP test. "These tests would be tied do world class standards that will be developed in conjunction with the National Education Goals Panel." Students, teachers, and schools will be rewarded or penalized based on their performance on this type of test.

The NAEP tests the cognitive domain (two plus two equals four). It also has tests the affective domain, meaning how one thinks and feel. There is an entire survey in the NAEP test for the student to complete about the family. NAEP asks 4th graders: "Are there more than 25 books in your home?" and "How often do you discuss things you have studied in school with someone at home?" So far, the NAEP test has been administered to volunteers, that is, if a child refuses to take the test, he is not supposed to be forced. Parents may or may not be informed that the test will be given. Parents should not let their children take the NAEP test. It is an invasion of their privacy, and the information can potentially be used against them.   The Iowa home school law currently allows the Department of Education to dictate which tests home educated students must take (from a list of approved tests). In the future, will home and Christian school students be required to take this type of test? Under Iowa law a student who does not score above the 30th percentile is considered to be ineligible for home schooling. Will home schoolers be able to pass the new OBE-based tests? If they can't pass the test in Iowa they may be deemed truant and subject to state child welfare intervention. In the face of this kind of pressure, some curriculum companies may alter their curriculum to fit these new OBE tests.

William Spady, the father of OBE, says "demonstration is the key word; an outcome is not a score or a grade, but (is) the end product of a clearly defined process that students carry out." OBE is a process. It is a series of exams given over time, administered to a numbered student whose scores are entered into a data bank. By continually retesting and monitoring, compliance with outcomes is improved. That is why the NAEP test is given strategically in fourth grade, eighth grade and twelfth grade. When compliance is inadequate, remediation, rewards, and penalties are used. Many of the concepts are measured using threshold level testing, which measures what stimulus is required to obtain a certain response from a student.

The Pennsylvania EQA test, a forerunner to the NAEP, provides an excellent example of threshold testing:


There is a secret club at school called the Midnight Artists. They go out late at night and paint funny sayings and pictures on buildings. A student is asked to join the club. In this situation, I would join the club when I knew: (a) my best friend asked me to join, (b) the most popular students were in the club (c) my parents would ground me if they found out I joined.


The child is provided with no option to separate himself from this sinful activity. The goal of this question is to determine where his threshold is -- what would it take to make this child engage in this activity? As Beverly Eakman points out, in her book Educating for the New World Order, "The assumption is made that the child would join the organization under some circumstance. It is the duty of the testers to find out what the circumstance might be... A `yes' answer [to situation b] demonstrates conformity to group goals, a bowing to group consensus, and that makes it the preferred response." The implications of subjecting Christian children to this type of testing should be obvious. 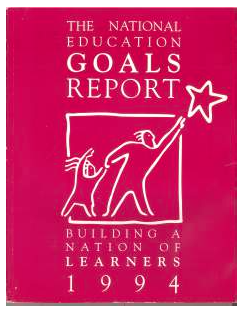 According to Goals 2000, the assessments or tests are aligned to the content standards. This means teach to the test. Teaching to the test means that one will succeed. If a teacher does not teach to the test, the student will fail. How will children be remediated to meet the exit outcomes in order to graduate?... So even if the federal, state, and local authorities leave home schoolers alone, the students will not meet the new goals. The only way to reach these goals will be to teach to the test, and that depends upon world view.

In June 1991, Oregon Governor Barbara Roberts signed an education bill into law in which the state legislature declared a state of emergency for the "immediate preservation of the public peace, health and safety." This legislation introduced the CIM and the CAM, the certificates of initial mastery and advanced mastery. Page 10 of the bill states that "A certificate of initial mastery shall be required for entry into college preparatory and academic professional technical progress leading to the appropriate endorsement." Another source reports that


There are nationwide plans to replace the high school diploma with the CIM. Instead of receiving a diploma that shows completion of four years of high school, students will now receive a CIM that demonstrates satisfactory completion of OBE outcomes.

Instead of measuring credits completed or number of years in school, it would require a demonstration of the deep mastery of core academic subjects as well as the capacity to apply this knowledge to the complex problems that characterize modern life and work... But no student would be able to leave high school without a certificate. The theory behind the certificate of mastery is that, given enough time and effort, all students can reach high standards....

The CIM is the ticket of eligibility for student advancement into higher education or employment. An earlier version of the Oregon bill would have made it illegal for employers to hire anyone without the CIM. In Mississippi legislation the CIM was termed the Certificate of Employability. It is just a matter of time before parents will see the results of this maneuver. Will Christian students be able to graduate or work in the future? Will they be deemed in need of remediation until they can demonstrate the political correctness and values change needed to get this ticket to full participation in society?... Most home schoolers are teaching their children at home to get away from education approaches that don't work. Competition has been the American engine. But now we will have cookie cutter schools, cookie cutter teachers and cookie cutter kids. In the drive to abandon the American industrial age legacy, schools are implementing "mass production" methods for children. Sure, there will be a choice. There will be chocolate, vanilla or strawberry cookies. But the "break the mold" schools are cut out of one model, the same national/international plan. Under America 2000/Goals 2000 all schools, all teachers and all students will achieve the same outcomes.  How will schools compete under America 2000/Goals 2000? For money, for students, for higher test scores (new measures of test), community service projects, using approved teachers, by experimenting and risk-taking, and by performance-based accreditation. These are the new measures of "accountability", i.e., control.

OBE means lifelong learning, birth to death; no grade levels; non-traditional levels; pass/fail, non-competitive grading; cooperative learning, students get a group test score; testing of the affective domain, feelings and attitudes; all learners pass, given enough time and remediation. But the Scriptures make it clear that there is really only one exit outcome that matters: For it is time for judgment to begin with the family of God; and if it begins with us, what will the outcome be for those who do not obey the gospel of God? (1 Peter 4:17) This is the exit outcome that parents need to be concerned about.


Posted by Charlotte Iserbyt at 5:01 PM