The other day in a post on this blog, "DRILL 'EM AND KILL 'EM" we reported on Stacie Starr, an award-winning top teacher. Here is what we wrote: 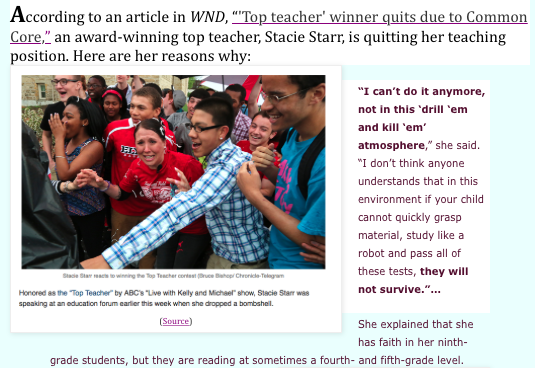 Another article was published about this same teacher titled "Nation's Top Teacher Drops Resignation Bomb: "I Can't Drill 'em and Kill 'em". There is a video with this article in which Stacy Starr reports on what is really going on in the testing. See the alarming statement reprinted below:

Another quote in this same article states:


What is even more insidious, is that special needs students have been left out of the mix to fall by the wayside. By that I mean, while they are normally allowed to have helps for their disability (like having the test read aloud), they are not allowed any such thing with PARCC. Which means that PARCC is acting outside and above the law with a "survival of the fittest" standard. Starr demonstrates the irony of all the children becoming "left behind" in this new system. [emphasis added]

This teacher's observations remind me of federally-funded controversial curriculum Facing History and Ourselves. I wrote wrote an article entitled "Too High a Price," published in the Bangor Daily News, June 10, 1983. My article was also included in the Record of Congressional Hearings related to Children's Fears of Nuclear War. Here are some excerpts from my article, written in 1983 (32 years ago!), critical of this mind-bending curriculum that manipulated children.


Too High a Price
Life used to be so easy. There always seemed to be an answer to everything.  Everything fit into place, getting up at  7 o'clock, going to school at 8, coming home at 4, doing homework at 8, and finally going to bed at 11.

In my tightly scheduled life I left no time to reflect.  In these past four months, however, I'v been forced to think.  It hasn't been easy.

The above is a quotation from, Student Journal Excerpts in Response to the Curriculum, Facing History and Ourselves:  Holocaust and Human Behavior, a federally funded program for eighth and ninth grade students.

The diaries students were required to keep were evidence of harming the students. Even the psychologist who helped write the program admitted to that but said it was necessary nonetheless.

The following quotations from Facing History and Ourselves: Project Evaluation, by Professor Marcus Lieberman, Harvard Graduate School of Education, published in Moral Education Forum's 1981 special devoted to the program, support my contentions regarding the program:

"Furthermore, the effect of the program on students may not become apparent until considerable time after the completion of the unit. Nevertheless, experimental programs must be able to evaluate outcomes. This article summarizes the strategies we used to detect some of the effects of the controversial curriculum. During the first year of the FHAO program we wanted to 'cast the widest possible net' to capture changes in the students' moral, ego and social development... Not too surprisingly, the junior high school students who took all these tests complained bitterly about the difficult in answering the questions posed in the protocols. (It became particularly difficult to persuade those students who had experienced a unit on resistance to continue with the tests!)

"While the advantage of 'casting a wide net' to capture any changes had seemed like a reasonable approach, the emotional response to what students perceived as a high level of abuse had been unanticipated..."

The intent of the program is deceitful. Through psychological manipulation, frightening films, moral dilemmas (the use of Professor Kohlberg's Moral Reasoning-situation ethics); the use of the Milgrim "shock" experiment, lifeboat survival games, role playing, use of personal journals, group criticism sessions, etc. 14-year olds' thinking is negatively influenced on the need to preserve our American system (preservation through clinging to time-tested values and through a strong national defense.)

In 104 pages of journal entries, at least one half of them reflect how guilty, fearful, desperate, and confused the students feel after going through the course.  No matter what page one turns to, one finds 14-year olds' quotations similar to the following: "I feel as though something I have had all my life has been taken away from me, something that can never be totally restored. I almost feel that I need it back because I feel so awful without it.... We all in our struggling humanity have to clutch our eyeballs to keep out the cold light of despair..."


Of interest is the fact that Tony Wagner, who supports the Finnish education model, was connected with all of this. He founded Educators for Social Responsibility (ESR) several decades ago. ESR's role in the early 1980s and thereafter has been to influence curriculum towards disarmament and Communist causes. Wagner is still President of ESR, and deeply involved in community (Communist) education activities, having taken over the presidency of the Institute for Responsive Education, formerly held by Donald Davies, the granddaddy of change agents involved in the original Elementary and Secondary Education Act (1965) and premier advocate of lifelong community education. Wagner has also been closely involved with the late Theodore Sizer whose Coalition of Essential Schools calls for a "less is more" education system similar to (similar to that of Adolf Hitler) which was accepted as a charter school model under the New American School Development project, a Public/Private agenda to restructure eduction from academics to workforce training. 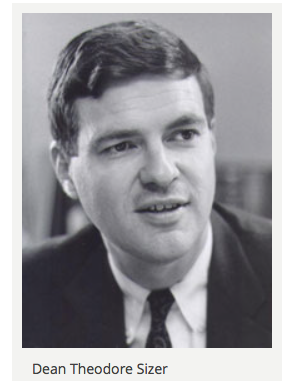