KLINE: The Man Behind HR 5 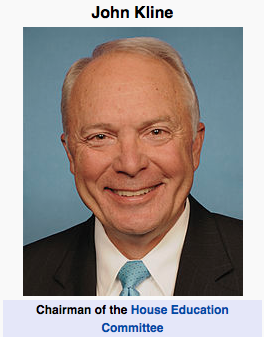 (1) Urge the reader to immediately contact his/her Congressmen to vote NO on Rep. John Kline's H.R. 5, the House version of the Reauthorization of the Elementary and Secondary Education Act (ESEA) scheduled for a vote in the House of Representatives next Tuesday, February 24, 2015.

(3) Advise the readers to exercise caution in allowing the military and education sectors of our nation to co-mingle as seems to be becoming the case, and as this blog has attempted to document through various posts.  Many U.S. generals support Common Core. We wrote previously: "Do We Want the Military Involved in Common Core?" and "UP TO THEIR SCRAMBLED EGGS IN ALLIGATORS!"

Why is this an issue? Because Rep. Kline, who is heading up the House Education and Workforce Training Committee dealing with this controversial legislation, is a retired Marine Colonel with an extraordinary background and important government connections. Notice Kline's committee assignments:

This post is in no way intended to denigrate any member of the military or the U.S. military itself. The writer is a mother of a U.S. Marine who served in combat in Gulf War I, and she herself served in the military during the Korean War.

You will note, aside from Kline's important position as Chairman of the House Education and Workforce Committee, his involvement on subcommittees responsible for provisions related to very controversial Early Childhood legislation, Subcommittee on Higher Education and Workforce Training, and his introduction of the Success and Opportunity through Quality Charter Schools Act (H.R. 10; 113th Congress). Here is an excerpts from his bio on Wikipedia:


Kline has stated, "Job creation is our nation's no. 1 challenge and Congress must make it our no. 1 priority." Kline has spoken in support of education reform designed to encourage parent involvement and teacher accountability....

The reason the writer is mingling the H.R. 5 legislation with the subject of military influence in education is due not only to the radical content of HR 5, but to a comment made by Rep. Kline in a Press Release out of his office entitled "Student Success Act HR 5," February 3, in which he says:


".....This proposal provides an opportunity to chart a new course...."

Taxpayers, parents, and traditional academic educators have some questions for Congressman Kline:

QUESTION for Rep. Kline:
What is your definition of "opportunity to chart a new course..."?

Do you mean "opportunity" to pass legislation to:

If the above 1-4 is answered affirmatively, then what Rep. Kline means is that H.R. 5 will definitely be "CHARTING A NEW COURSE" -- a deadly course for our children, families, and for our  formerly constitutional republic.


“If education is beaten by training, civilization dies"
~C.S. Lewis

Related Posts:
ALERT: HR 5, the Student Success Act of 2015
UP TO THEIR SCRAMBLED EGGS IN ALLIGATORS!
Do We Want the Military Involved in Common Core?

Posted by Charlotte Iserbyt at 12:47 PM