EDUCATION CZAR LAMAR ALEXANDER
and what he intends to do to YOUR children! 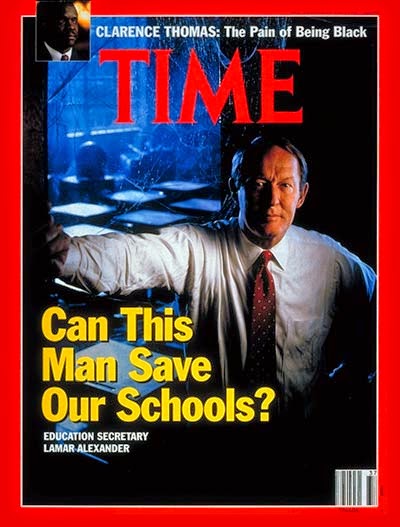 Lamar Alexander once claimed, “The brand new American school would be year-round, open from 6 to 6, for children 3 months to 18 years.”


Senator Lamar Alexander, who is heading up the Reauthorization of the ESEA effort, and has taken aggressive steps to effectually SHUT down all public comment, has a long history of pushing forward his radical agenda to restructure ALL of American society. His agenda won't just affect children adversely. It will also affect YOU!

Bear in mind that the “AMERICA 2000 PLAN,” written in 1991, was designed to implement the Carnegie Corporation’s restructuring agenda, was presented to the American people by President Bush’s Secretary of Education Lamar Alexander. The plan proposed to radically restructure American society and was prepared by, amongst others, Chester Finn—former assistant secretary, Office of Educational Research and Improvement (OERI), and associated with Education Excellence Network (Hudson Institute). Secretary Alexander claimed, “The brand new American school would be year-round, open from 6 to 6, for children 3 months to 18 years.” The Executive Summary stated that

The America 2000 strategy has four parts that will be pursued simultaneously. For tomorrow’s students, we must invent new schools to meet the demands of a new century with a New Generation of American Schools, bringing at least 535 of them into existence by 1996 and thousands by decade’s end…. [bold added]

The slim booklet containing America 2000: An Education Strategy (Rev.)—Making This Land All That It Should Be contained a Message from President George Bush, dated April 18, 1991, that shot forth the opening salvo for the lifelong womb-to-tomb education reform:


To those who want to see real improvement in American education, I say: There will be no renaissance without revolution....

For all of us, for the adults who think our school days are over, we’ve got to become a Nation of Students—recognize learning is a lifelong process.….[bold added] 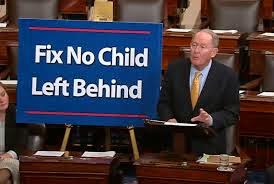 The rationale for this radical reform proposal was the bizarre claim that children are responsible for the economic troubles of our nation!


As a nation, we now invest more in education than in defense. Nor is the rest of the world sitting idly by, waiting for America to catch up. Serious efforts at education improvement are under way by most of our international competition and trading partners.

While more than 4 million adults are taking basic education courses outside the schools, there is no systematic means of matching training to needs; no uniform standards measure the skills needed and the skills learned. [bold added]


This matching of skills training with economic needs is precisely what the late Prof. Eugene Boyce of University of Georgia described so well when he defined Communist polytech education as follows in his book The Coming Revolution in Education (1983):


"The communists do not educate people for jobs that do not exist. No such direct, controlled relationship between education and jobs exists in democratic countries.”


The solution to this created "crisis" was proposed by Carnegie’s Marc Tucker, who took care of matching a child's training to economic needs in his Human Resources Development Plan for the United States, developed by the National Center for Education and the Economy (NCEE), was unveiled in 1992. The facts are detailed in my book the deliberate dumbing down of america, pages 278-279, and also Appendix XVIII.

Posted by Charlotte Iserbyt at 5:47 AM